50 Years Ago: An example of steel’s flexibility – Harringay Arena 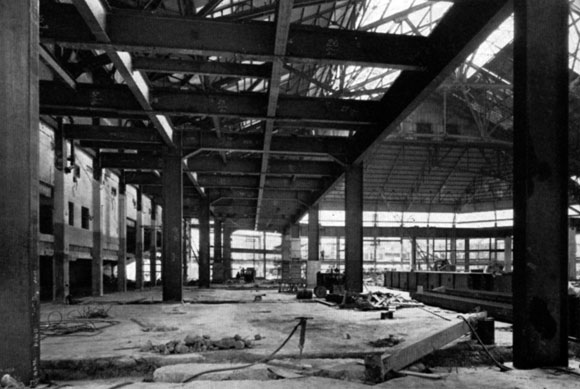 Part of the gallery floor viewed from ground level

In the years before and after the Second World War, Harringay Arena was a name intimately associated with a wide variety of sports – in particular, ice hockey and boxing. It therefore came as a considerable surprise to the sporting public when it was announced that the Arena and the adjoining Market Hall were to be sold by the Greyhound Racing Association to Allied Suppliers Ltd, for use as a depot for the warehousing and distribution of domestic consumer goods.

The decision to adapt the Arena to a new purpose could not have been contemplated had the original building been of other than steel construction.

The original purpose of the building was to provide a sports arena and the problem then was to provide a large roof area while giving all spectators an uninterrupted view of the arena. This necessitated tiered seats and the sloping supports for these seats were an integral part of the design to achieve structural stability of the huge roof which gave a clear span of 223 ft. The roof was carried on five trusses at 51 ft centres rising from a springing height of 35 ft to a ridge height of 100ft. The size of these trusses was such that it proved economic to build them in high tensile steel in this form of construction and it is believed to be the largest example of its kind.

In the early stages of planning it was obvious that it would be desirable to remove the rakers, but it would be vital to replace them with an alternative structure to provide restraint to the external stanchions at a similar level. The solution was found in the decision to construct a gallery floor at this level, which, by providing office and further storage space would help to take full advantage of the enormous volume of the building.

The dismantling of the existing steelwork reduced the stability of the building shell but this was readily compensated for by the steel framework which replaced it and was admirable for the purpose.

The walls and stanchions of the existing building are supported on piled foundations, and the Piccadilly Line tube tunnels run diagonally underneath the building. In order to bridge the tunnels part of the superstructure is supported on large beams. The centre portion of the Arena, containing the old ice rink floor, is free of any piling and the new gallery floor was to be made in the form of an annular rectangle 50 ft wide, so that as much as possible of the existing foundations could be utilised.

The 210 ft by 50 ft framing adopted for each long side was essentially a space grid with freely supported edge conditions. Portal frames designed with fixed ends were introduced at 51 ft 6 in centres, which, through pin-jointed struts, provided adequate lateral restraint to the existing stanchions. The entire floor framing constituted a form of horizontal bracing to ensure a sufficient margin of stability against overturning of the structure as a whole. These lateral loads together with the vertical loadings from the gallery were ultimately transmitted to the foundations through these portals. Although the sections used in this area were 36 in 16½ in by 230 lb and 36 in by 12 in by 170 lb universal beams, i.e. the largest of the rolled beam sections, the design proved more economical than a conventional ‘simple design’.

High-strength, friction-grip bolting was adopted at major structural connections, eg at splices in continuous plate girders, node points of the pace grids where there was continuity in both directions, and portal frame knuckles. The largest size bolts used were 1 in diameter. This helped in achieving neater details, speedier and more economic erection and more dependable joint performance. Furthermore, any site welding was avoided.

Although a considerable amount of foundation work was neccessary, it was possible to utilise a number of the existing pile caps of which many were only 1 ft 2 in below the floor level. To avoid excessive cutting away or alternatively a projection above floor level, the slab bases of the stanchions were designed to transmit fixing moments, with ¾ in fillet welds to the flanges and 5/16 in for the web. In some cases the existing concrete was drilled with a rock drill and Rawlbolts used for holding down. In another case, a pin base could only be provided where the stanchion was supported on one of the existing large concrete beams, but fortunately it became incorporated in a five-bay portal across the complete building, where the fixing moments could be taken up in the bases of the other free stanchions.

The new Harringay Depot has a ground floor area of 7,400 square yards, thus forming the biggest single unit of its kind in the country. 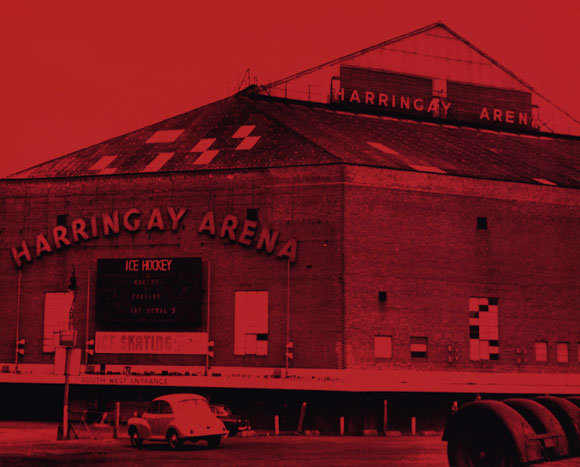