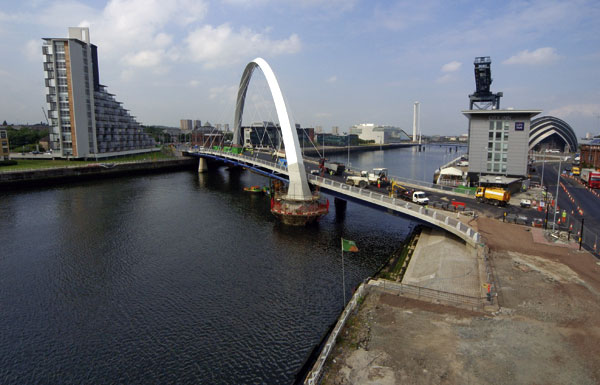 This elegant bridge will aid development of a fast growing area of Glasgow.

The judges say this eye-catching structure is thoroughly professional, meets the aspirations of the client and is a major addition to the Glasgow skyline.

They went on to add that the single arch has a diamond-shaped profile, giving a slender appearance enhanced by reflections of light from the sky and the river surface, strikingly augmented at night by architectural illumination. The design of the arch, the hangers and deck, is satisfyingly and effectively resolved with clear expression of their functions.

The 96m single span structure crosses the River Clyde and was constructed to improve access to the rapidly expanding Pacific Quay area of the city.

A couple of firsts are also associated with the project: the single arch rib straddling the deck is the first such structure in the UK to be tied to the deck, while the diamond shaped arch section is also unique. 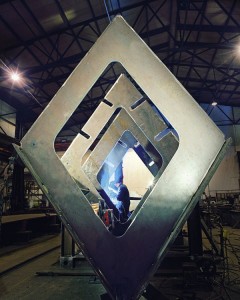 “The shape enhances the slenderness of the arch while also providing significant visual interest from the constantly changing reflection of sunlight and from the projection of the architectural lighting,” he adds.

The structural relevance of the diamond shape is also demonstrated by the fact that in cross section the hangers intersect the arch rib at angles approaching 90-degrees.

The arch is 130m-long around the curve and was fabricated by Watson Steel Structures  in sections each weighing approximately 50t.

Minimising the environmental impact was a key factor in the development of the conceptual detailed design. This included the use of tubular piles and pre-cast concrete set above river bed level to lessen disturbance of sediments. Making full use of off-site fabrication in terms of steel and pre-cast concrete also minimised the duration of on-site works.

Considerable cost savings were made by integrating the construction of the abutments, piles, composite deck and steelwork. An example of this was highlighted by a large floating crane which was used for the installation of the steel piles and the steel deck girders. Consequently, the pre-cast units were sized around the lifting capacity of this crane.

The nine arch sections were delivered, assembled and welded on the deck into three large sections each weighing 150t. Two 500t capacity cranes were then used to tandem lift the sections onto temporary trestles. The two joints in the arch were then butt welded in situ.

The support trestles were then un-jacked and removed and the hangers installed. Finally the deck weight was transferred to the hangers and the temporary supports in the river removed.