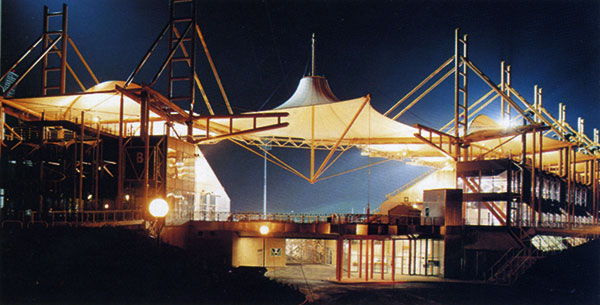 The Don Valley Stadium is one of five major new facilities that have been built in Sheffield in time to host the World Student Games. As part of the city’s concerted effort for regeneration. Some 6,000 competitors from over 120 countries are involved in the games which, in that sense, are second only to the Olympics.

Acceptance of Sheffield’s bid to host the games in November 1987 set a tight timescale for designing and constructing an athletics stadium to full Olympic standard, with an all seater capacity of 20,000 expandable to 40,000 with temporary seating for the opening and closing ceremonies. Half of the permanent seats were to be in the main grandstand parallel to the finish straight, with about three quarters of these being undercover. Warm up facilities were also required, including an indoor running track.

During the design stage the brief was modified to give a permanent capacity of 25,000 all seated and in the event the temporary seating provision was not required.

To accommodate 10,000 seats this grandstand construction was continued with the curve of the track for one bay at either end of the finish straight. This also helped to create a fitting portico for the main competitors’ entrance at the western end, the ‘Marathon Gate’ and, it transpired, provided an ideal location for the later addition to the brief of a library at the eastern end.

To provide wholly uninterrupted viewing the first available support line for the roof was behind the rearmost row of seats. This fell directly over the indoor track in its most economic position tucked under the seating to reduce the building footprint. However, by reflecting the raking support member beneath the terraced seating and linking these two members at spectator level by a beam which would then also support the concourse floor, a tied A frame was generated to solve these apparently conflicting ideals. The roof columns were continued down through the A frame to provide transverse stability above its apex and also to act in tension to provide a midspan support to the tie beam.

A simple and efficient arrangement of 12 metre high masts, back struts and stays achieves the 26m free cantilever of the grandstand roof at an overall equivalent weight of 40kg/m² of steel. In strong winds this cantilever experiences a net uplift, hence all members need to be capable of resisting compressions and therefore circular hollow steel sections are used throughout due to the high multidirectional resistance to buckling. The main cantilever, backstrut and mast members are all of 508 dia CHS, whilst 323.9 dia CHS is used for the stay system, the front element of which is some 19 metres long and under uplift is equivalent to a six storey high unrestrained column.

To resist high lateral forces from the membrane roof I and T sections and platework are welded between the front cantilever and backstrut members form vierendeels, with holes in the cross stiffeners to facilitate roof drainage. Polycarbonate glazing in the panels of these vierendeels, which demonstrate the versatility of steel to form multifunctional integral elements, will produce a contrast in light to the 7% translucency of the surrounding membrane. A ring of 50mm dia ties braces each group of vierendeels back to the line of masts to resist, in particular, out of balance forces from unequal loading or panel replacement. On this line a central (or pelvic) vierendeel transfers such longitudinal forces to the apex of the A frames and shares a common chord with a lower warren truss which performs the same function for the vertical loads from the immediate seating support beams.

A clear, simple planning and structural discipline produces an eminently useable solution enhanced by the bold decision to reduce the site level to form a natural arena, thus solving problems left by previous industrial use. The result is a simple, elegant and well articulated building. 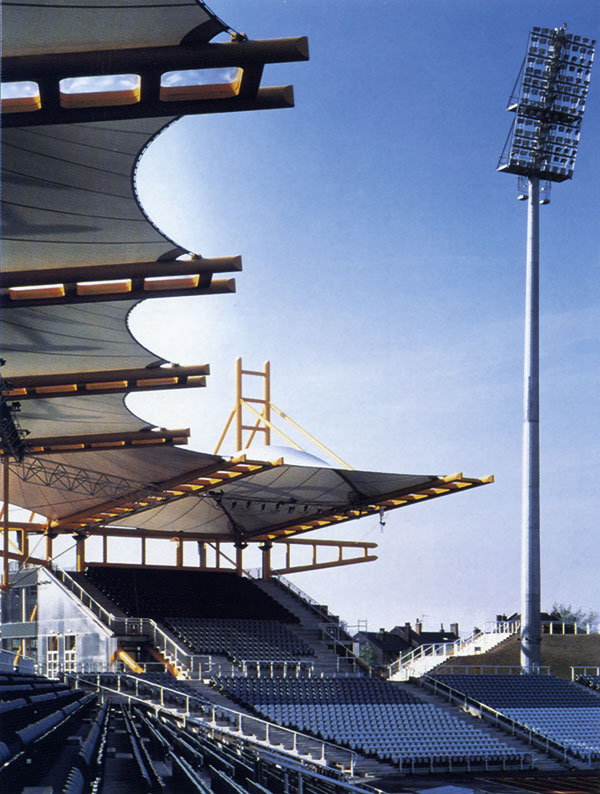