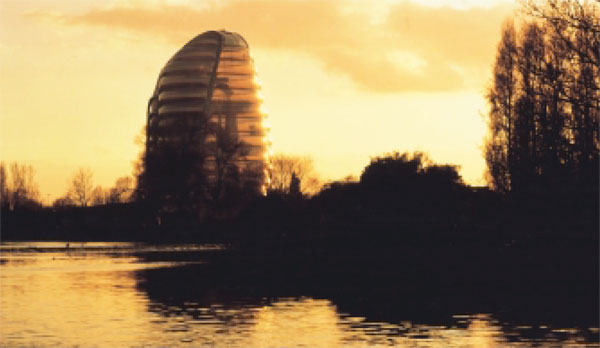 The National Space Centre is the UK’s only attraction dedicated to space science and astronomy.

The design comprises three principal elements: a main podium, an annexed rocket tower and a prefabricated Challenger Learning Centre. Together, these elements form an exhibition venue of international standing and a new centre of excellence for education and research affiliated to the University of Leicester. 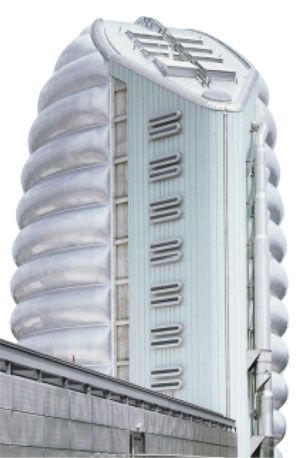 The podium is a double-height space (6m high) built on a lightweight 14m-grid steel frame. It is capable of accommodating a flexible arrangement of exhibition display systems as well as the full integration of structure and service zones. It has been created as a 5,000m² square-plan structure in the renovated shell of the disused storm-water tank.

The podium is ‘wrapped’ in a double skin, comprising an inner wall of fenestration and silver sinusoidal steel cladding with a homogenous outer screen of perforated stainless steel panels. In practical terms, this affords privacy to offices and facilitates the optimum environment for the safe display of sensitive artefacts.

The podium contains administrative and research facilities affiliated to the University of Leicester in addition to the public Visitor Experience, a 2.5 hour interactive exhibition. Organised in a ‘hub and spoke’ arrangement, the Visitor Experience is designed to facilitate visitor flows for the Space Theatre, a state-of-the-art planetarium. This huge geodesic dome (20.5m) perforates the roof slab at the centre of the exhibition space, acting as a foil to the soaring vertical form of the Rocket Tower. The tower has been designed as a showcase for high-profile international exhibits, most notably the ‘Blue Streak’ F16 and Thor Abel rockets. Its volume has been defined by the dimensions of these exhibits, with its highest point (42m) proportionate to that of the largest rocket installed (26m). 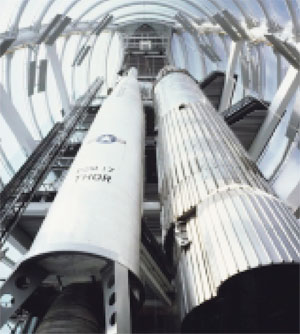 The volumetric requirements of the tower are expressed in its structural skeleton. The primary curving structure is composed of a series of simple steel arcs of varying radii – attached end-to-end and rotated one to the other, braced by a vertical concrete stair core. The geometric configuration of the tower structure, with its combinations of curves and in-line twists, represented an interesting challenge for the structural steel subcontractor, S H Structures.

They commenced their detailed design work using a 3-D model (developed by the architects in collaboration with the engineers) as a starting point. With the use of current CAD technology, this could be relatively easily manipulated, allowing the team to work efficiently on the basic skeletal structure, despite its obvious geometric complexity.

The principal benefit of such a considered design is that it can be precisely translated to the workshop floor, in terms of simplicity of both explanation and assembly.

Horizontal radiused CHSs support an EFTE skin at 3000mm vertical intervals, approaching the maximum achievable span of the latter material. EFTE foil is a modified co-polymer that poses no threat to the ozone layer. Weighing less than 1% of the dead weight of equivalent glass but with greater insulation properties than even doubleglazing, its sustainable benefit is that it greatly reduces the energy requirements to heat the space that it covers.

The resulting envelope is an exemplar of efficiency – the enclosure of a complex 3- Dimensional space with minimal secondary support mechanisms and troublesome joints and junctions.

A slightly incongruous match between the rocket housing and the general exhibition space does not ultimately detract from the sense of wonderment, excitement and pure pleasure that this design gives to its many visitors.