SSDA 2003 – Renewal and Refurbishment of the Brighton Dome and Museum

Posted on September 1, 2003 by NSC2 in Commendation, SSDA Awards

The 200-year old Brighton Dome, Corn Exchange and Museum buildings are a combination of a unique historical heritage and styles of world importance. They were in need of renewal to sustain their continuing existence.

The buildings were originally commissioned in 1803 by George, Prince of Wales, later the Prince Regent, as a riding stables and a riding house. They have undergone many changes since then. 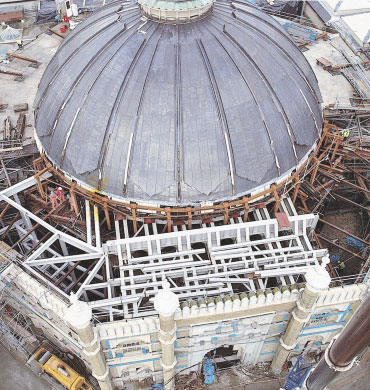 The original Dome, which, at 80ft diameter x 65ft high, was the largest timber-framed structure of its type in the world. The Dome was originally supported on a timber ring beam consisting of three wooden sections that circled the building and supported the main Dome Roof, this beam was in turn supported by a series of cast iron supports.

From 1863 until 1930 the Dome was used as Assembly Rooms. The Corn Exchange together with the Museum and Art Gallery were added in 1873. The Pavilion Theatre, seating over 2,000, was formed in the 1930s with the dome auditorium transformed by the addition of an Art Deco ceiling supported by steel trusses beneath the existing timber-framed Dome.

This then, was the first use of structural steelwork on this project. It was used in 1930 to sustain and modernise the building that had originally been constructed in 1803. Now, over 70 years later, steelwork has again been chosen to further extend the life of the buildings.

Part of the project involved the removal of the two proscenium columns added in the 1930s to replace the previous cast iron supports which were replaced by cantilevered beams inserted into the roof space. This involved steel-framed temporary works to support the existing timber Dome and 1930s trusses, then transferring the loads by jacking onto the new steel frame. All of the temporary steelwork and the new permanent steelwork had to be manhandled into the existing buildings and then erected from inside. It was a very difficult and congested site.

This work was successfully completed whilst maintaining the relative level of the existing domed roof structure. No measurable settlement or uplift occurred. Various areas of the refurbishment site are listed as Grade 1 and 2 status meaning that the works had to be carried out with sensitivity to the condition and nature of the existing structures. 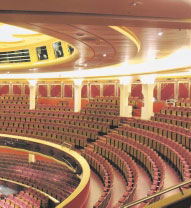 Pre-loading of elements and jacking of existing structures were used to prevent excessive deflections. Substantial alterations, such as forming openings in walls, were dealt with by maintaining existing load paths and by spreading stress concentrations through box frames or spreader beams to ensure that the overall load distribution was not significantly altered.

Parts of the existing steelwork that had been dismantled, together with some of the new temporary support steelwork, were re-fabricated and incorporated into the new permanent works. In effect, the steelwork was re-used or re-cycled. Approximately 500 tonnes of temporary and permanent structural steelwork was installed over a 22 month period between April 2000 and February 2002.

Modified and transformed before during its 200-year history, upgrading the listed dome auditorium to provide a flexible commercial theatre presented a number of complex and challenging problems. The fact that 400 tonnes of structural steel, much manhandled into place, is unseen by users of these prestigious facilities, is testimony itself to just how well the project team partners met these challenges.