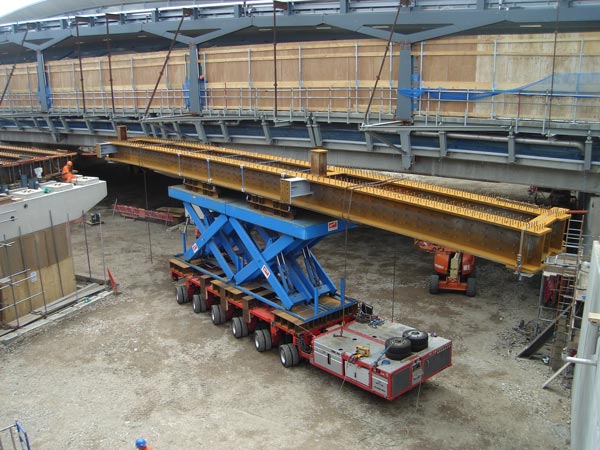 Working on the tight and confined London Bridge station redevelopment site, Cleveland Bridge has no room to install a mobile crane and has had to come up with a novel way of transporting and erecting girders.

“We’ve had to use a self propelled mobile transporter (SPMT) carrying two scissor lifts which in turn support a girder. Once the SPMT has been manoeuvred across the site and is in position, the scissor lifts are extended to lift the girder into place,” said Ben Binden, Cleveland Bridge Project Manager.

Three pairs of plate girders, up to 30m long and weighing 55t, form a new bridge deck for the station project.

In total Cleveland Bridge will erect 29 bridge decks during a number of sequential visits, adding up to about 4,000t of steel, with the last ones erected in early 2017.

“Each of the visits requires us to erect either three or four decks depending on their position, and having completed the work for platforms 14/15 and 12/13 we’ve installed seven decks so far.”

All 15 platforms at London Bridge are being rebuilt to be covered by strikingly designed undulating canopies of steel and aluminium, incorporating north-facing glazing that will let light flood the platforms and the new and larger concourse being built directly below at street level.

To keep passenger disruption to a minimum, the works are being undertaken in a sequential manner, with platforms being upgraded two at a time, thereby leaving the station with 13 ‘live’ platforms throughout the construction programme.

Work is now progressing towards the completion of platforms 11 and 10, which should be ready for opening between 20 December and 4 January 2015.