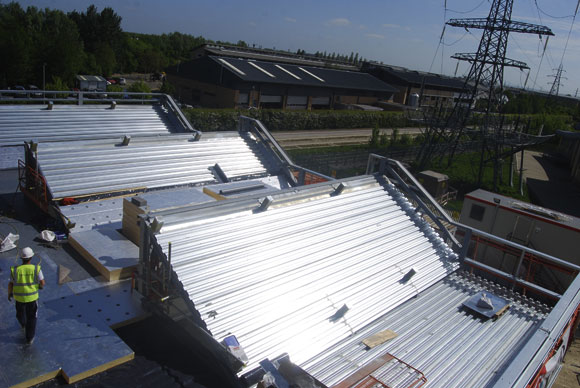 North lights will be installed on the building’s roof

Forming part of a multi-million pound project, an innovative teaching and workshop centre aimed at supporting low carbon enterprises is making use of a number of sustainable features including a steel frame.

Educating tomorrow’s workforce in the necessary skills for building a low carbon environment is gaining in importance year on year. Local authorities are keen to promote and invest in their environmentally sustainable future, and to ultimately achieve this a raft of new learning facilities is likely to be needed.

One such establishment is the SmartLIFE Low Carbon Centre, a joint venture between Cambridgeshire County Council and Cambridge Regional College, under construction on the outskirts of Cambridge. Here the skills needed for constructing low carbon buildings and installing renewable energy solutions will be taught. The Centre will also deliver new jobs and help reduce the impact of CO2 locally.

The project has been designed as a low impact and highly sustainable building which is aiming for a BREEAM ‘Excellent’ rating. To achieve this desirable rating the building will include solar thermal water heating, highly efficient heat recovery systems, rainwater harvesting, solar shading, photovoltaic arrays for electricity generation and automated lighting. 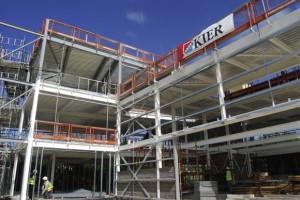 The building is split between three storey and single storey zones

The visual character of the building, according to project architect and engineer Pick Everard, is strong, simple and modern. There are sharp, clean lines from contrasting anthracite fibre cement panels with light coloured profiled aluminium cladding.

The 1,221m² steel framed structure will incorporate skills and training areas, with a dedicated workshop area for practical learning, classrooms and support areas where advice for local businesses will be available.

Internally, the structure is divided into two different blocks, one three-level part housing flexible teaching areas, research facilities, seminar rooms and a second floor roof terrace; and a single storey area given over to a renewables workshop.

With so many sustainable features attached to the Centre, deciding on which framing material to use for the construction programme was another important design decision.

“It all came down to speed of programme and weight,” says Ravi Vyramuthu, Pick Everard Project Engineer. “Steel offered us a much quicker programme, which obviously drove the overall cost down, while the site’s poor ground conditions were better suited to a steel frame as it’s lighter and needed minimal foundations.”

The overall main frame consists of a fairly straightforward design with a centrally located braced lift core and some perimeter bracing giving the structure its stability. Because many of the structural bays contain windows or doors, the locations suitable for bracing were few and far between, so the majority of bays, at either end of the building, incorporate moment frames to take lateral loads. 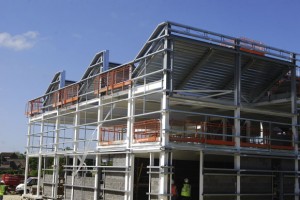 A steel frame was chosen for economic reasons

The three-storey element (classroom area) has been erected around a regular grid pattern which is uniform for all three levels. The arrangement of columns and beams is incorporated with ComFlor 46 metal decking from Tata Steel, which was installed for the structure’s two floors and the roof, with its composite action adding to the overall stability.

Explaining why this decking system was used, Pick Everard Structural Engineer Sarah Parker, says: “The economic project design required the floors to be as slim as possible.”

ComFlor 46 is a simple trapezoidal composite deck with a strong and reliable shear bond performance. The shallow shape reduces the volume of concrete needed, with resultant savings in structural and foundation costs.

Externally, the three-storey block will have ‘punched’ floor to ceiling windows for a strong vertical emphasis and projecting window pods and screen walls for variety. Fibre cement cladding, laid in random coursing will create a vibrant façade and backlit polycarbonate on a prominent corner of the site will act as a beacon and focal point for the development.

The other portion of the structure, containing the renewables workshop, is currently a double height space, but one which can be easily reconfigured into a two-storey building. First floor steel beams have been installed – some of which support a mezzanine level – and these beams could be utilised for an increased mezzanine, or even a first floor level, if the need arises.

The workshop is topped with a sawtooth roof profile, which not only provides the structure with definition, but also allows glazed north lights, photovoltaic cells and solar water panels to be installed on the slopes. This part of the Centre also features long horizontal windows at high level with narrow slit windows for tutorial bays. Large areas of the external walls will be glazed to allow activities inside to be visible.

Steelwork for the project was completed earlier this year and all 85t was erected in under two weeks.

Summing up the job, Ian Peachment, H Young Structures’ Managing Director, comments: “It’s a very economic design and we designed all of the connections. Using just one mobile crane, the erection sequence presented no problems, as the site was clear of any obstructions and the weather stayed fine.”

A future hive of activity

The SmartLife Low Carbon Centre is part of The Hive, a proposed multi-million pound education and enterprise park that will eventually include a SmartLife eco-homes park and a Future Business Centre. The site is located to the north of Cambridge city centre, adjacent to Cambridge Regional College and close to the Science Park Campus.

Steel is expected to play a significant role in the construction of any new developments within The Hive, a site which will have significant benefits for the local community.

What will make this business park different to others, according to Cambridgeshire County Council, will be its overarching focus on business that is good for society and the environment.