All change at new ticket hall 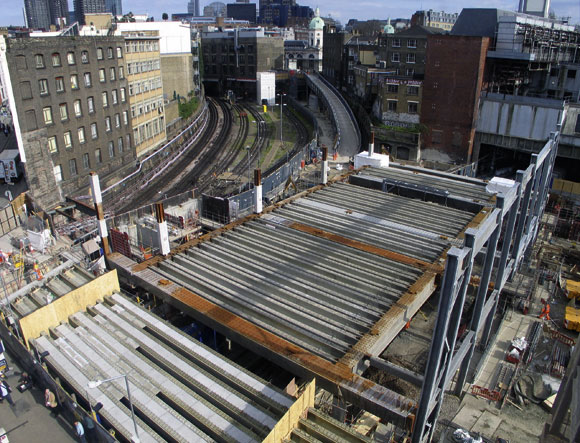 A steel framed ticket hall is central to Network Rail’s plans for Farringdon Station, which is set to become one of London’s busiest transport hubs. NSC reports.

Construction projects in city centres invariably throw up logistical challenges, sometimes associated with the busy location and sometimes because of traffic or nearby transportation infrastructure.
Getting materials and equipment on to these sites can also be problematical and so deliveries are usually made on a just-in-time basis, as city building sites generally have little or no room for storage. Once everything is on-site, issues such as noise, excessive dust and how to lift materials without overslewing busy streets or occupied buildings must also be taken into account.

A project in London has had to deal with all of these issues, and some more, while redeveloping one of London’s oldest stations. Farringdon was originally built in 1863 and serves the capital’s underground and overground networks. It is currently being transformed in readiness for more services and longer 12 car trains on the Thameslink route.

The station, located just north of the City of London in Clerkenwell, will on project completion in 2019 become one of the city’s busiest hubs, handling London Underground trains, Thameslink overground services as well as being a stop on the brand new Crossrail line. 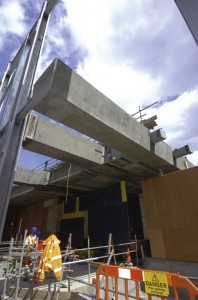 This will make it the only station serving all three of these services, and with over 140 trains every hour there will be direct connections to four of London’s major airports (Gatwick, Luton, Heathrow and City) and two international rail stations (St Pancras and Stratford).

Work on Farringdon’s new Crossrail platforms, which will be located approximately 25m below the existing station, has yet to commence, but at ground level a number of project elements are in progress including the construction of a new Integrated Ticket Hall (ITH).

Situated on the opposite side of Cowcross Street from the original Grade II listed station building, the ITH will provide a unique link between three rail services and help to draw new people and businesses to the area.

The steel framed ITH straddles the southern end of the station’s Thameslink platforms (which are being extended to accept the longer trains) as well as a section of the adjacent underground lines. This position has probably had the biggest influence on the project’s construction programme, as Nick Hayes, Bourne Steel Operational Director explains: “We are erecting steelwork over ‘live’ railway lines, which are subject to two separate possession orders – Network Rail and London Underground.

“Consequently, the majority of our erection work is being carried out during weekends, Bank Holidays and at night, making our programme a lot slower than we would normally expect.”

The site, bounded by busy streets on all sides, was also short of large access points, until a temporary steel framed slip road was installed opposite Smithfield Market. This large ramp allows equipment and materials to be delivered to site without interfering with rail services.

Some of the first steelwork to be erected were a series of eight 27m-long prismatic girders which form the ground floor level of the ITH. These girders, weighing 60t (40t of steel), were pre-encased in high-quality concrete for corrosion and fire protection purposes. All were lifted into position during successive night time possessions, using the on-site 600t capacity crawler crane.

The large crane has been used for all steelwork erection as it has the reach and capacity to lift to all points of the site without overslewing any of the adjacent streets or rail lines. The crane is currently positioned on the part of the site that will be the Crossrail half of the ticket hall. 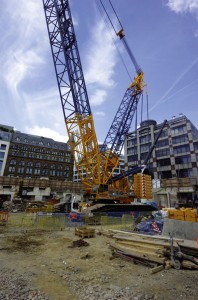 As the Crossrail contract had not been given the go ahead when work initially started at the station, the ITH steelwork has been designed in such a way that a second portion can be bolted on at a later date. For the initial steelwork programme, grid line K marks the final line of steel for the first phase. The extra loadings an extension will exert have been accounted for by ‘beefing up’ many of the steel columns and beams along this grid line.

Also in preparation for the Crossrail addition to the station, lift shafts have already been dug and pre-assembled steelwork inserted.

“Off-site construction is important on this job as space is at a premium, so for logistical reasons we have to do as much as possible,” explains Mr Hayes. “Off-site work has included all of the concrete encasement of the steelwork, and fully assembled and glazed rooflights as well as feature stairways.”

Prior to the prismatic girders being installed (the prismatic shape was chosen as it matches the precast beams they will support) two rows of 15m-high columns and connecting box girders were erected either side of the ‘live’ rail lines. Again, this work was carried out during weekend and night time possessions.

Once the ITH’s floor has been cast, work will then continue almost unhindered. The concrete level will act as a crash deck and allow steelwork erection for the remainder of the ticket hall to be done during normal working hours.

Two rows of 12m-high Y-shaped columns will support the ticket hall’s roof, creating the large open column free area. Spanning between the feature columns will be another series of 28m-long beams, these ones supporting the structure’s environmentally friendly brown roof.

Although the ticket hall is central to Farringdon’s overall redevelopment, to the average passerby work looks like it is moving very slowly.

“Because of the need to erect steel during possessions, maybe only one column or beam is erected in a certain week,” says Tim Harman, CoLOR Engineer. “Also the work needs to be intergrated with construction of the new platforms and complex re-routing of the train services, electrical and control systems. So it may look like the project is progressing slowly, but everything is on schedule.”

The Thameslink platforms and the new train shed roof will be ready for the 12 car trains which will come into service this December. 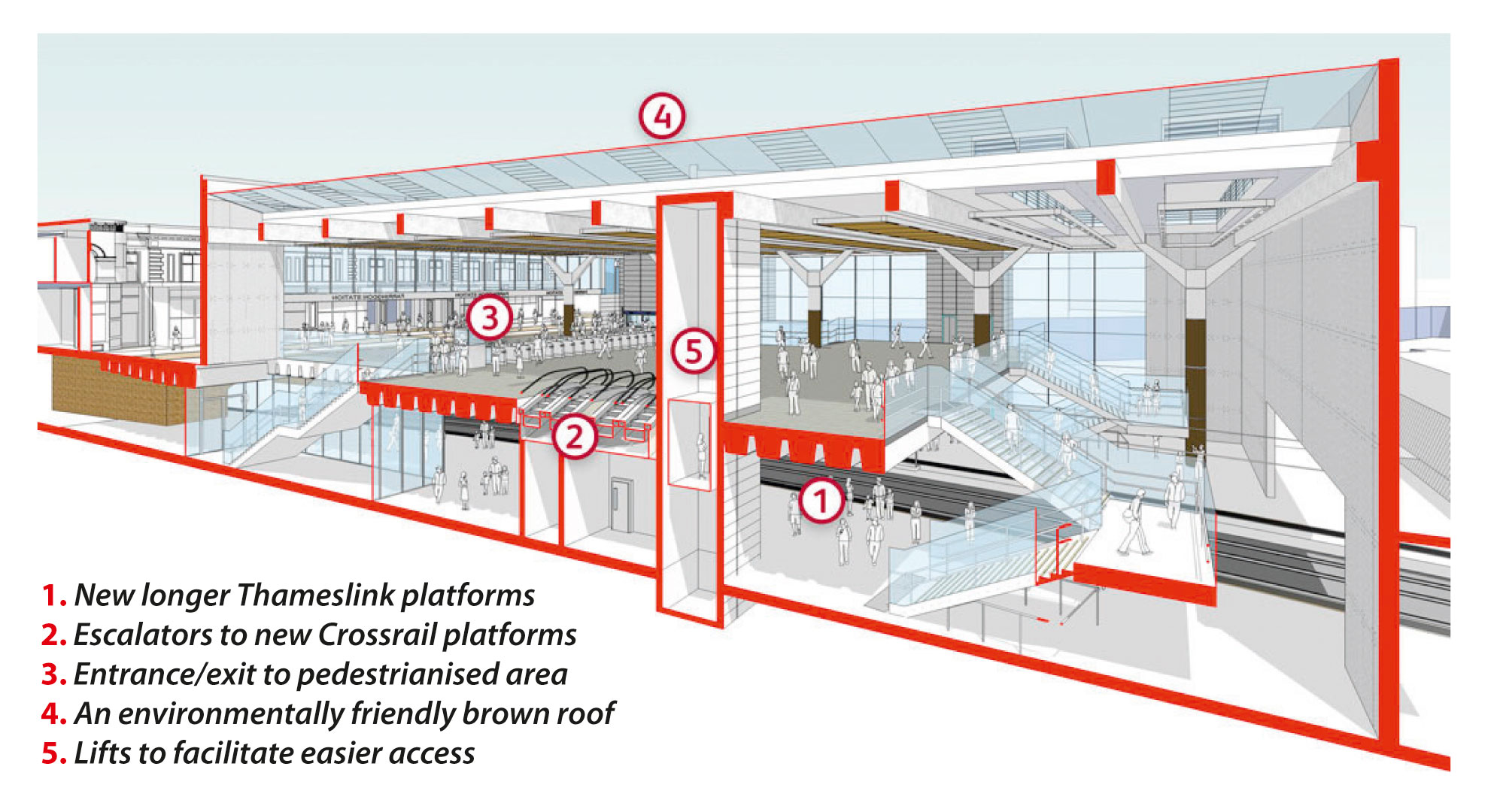 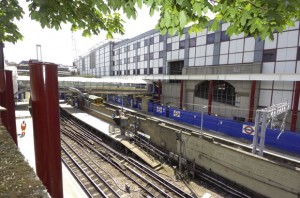 The northern end of the station’s platforms are uncovered and the new train shed roof will link up to the existing roof structure. The new roof has an approximate area of 1,680m² and is formed by a series of 18 tubular columns supporting 19 cross beams and 140 glazed panels.

Aside from the tubular columns, the roof structure is being delivered to site in fully assembled pieces fabricated from box sections. These pre-assembled sections are 28m long by 3.5m wide and are curved in plan, to take into account the platform’s curvature.