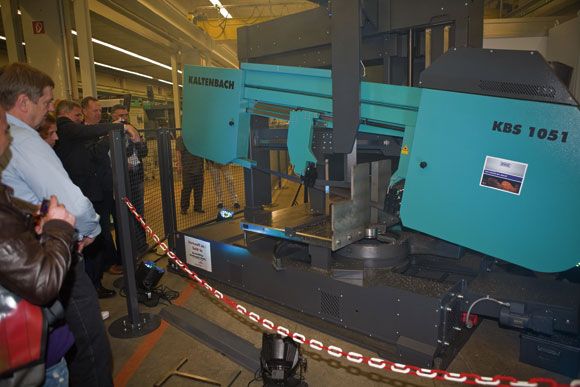 Kaltenbach’s International Partners in Steel event in Germany featured a raft of new and upgraded machines for the steel construction industry.

This year’s International Partners in Steel (IPS) event was held at Kaltenbach’s Lörrach headquarters in Germany between May 9-13. Under the banner of ‘We know how: Logistic Process Control’ the biennial event showcased innovations for improved efficiency, not just from Kaltenbach, but also from the 40 partner companies that took the opportunity to exhibit their products.

With more than 3,000m² of exhibition space and international visitors from 52 countries attending the event, the overriding atmosphere was one of confidence that the worst of the economic downturn had past.

In tandem with this upbeat outlook Kaltenbach representatives reported a strong order book and plenty of interest from UK stockholders and steelwork contractors.

New Kaltenbach machines on show included the KBS 1051 band saw. This unit fully exploits the marked cutting performance benefits of TCT blades (bi-metal blades can also be used), using powerful and proven servomotor, ball-screw down-feed technology. Combined with Kaltenbach’s unique AFC (Auto Feed Control), which achieves dynamic, auto-sensing and adjustment of the band-cutting angle ‘during’ the cutting cycle, throughout a changing cross-section, optimised cutting performance is achieved, with minimum cutting edge contact area. The KBS 1051 has a high-speed, multi-positional mitring range of -30°/ 90°/+45°, with maximum material capacity of 1030mm x 500mm down to 30mm × 10mm minimum. The first of these machines have been installed in the UK this year, with Kaltenbach reporting considerable worldwide demand. 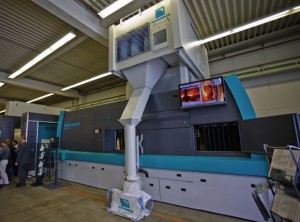 The Sprint 1504 shot blasting system, fully integrated with new inTEC auto-painting technology is claimed to achieve significant advances in the even control of paint coverage, including fabrications, with associated cost, finish and environmental benefits. Shot blast cleaned and preheated material entering the painting tunnel, passes through a new laser sensing system that rapidly creates a 3D profile of the material, which is graphically shown on a colour touch-screen panel 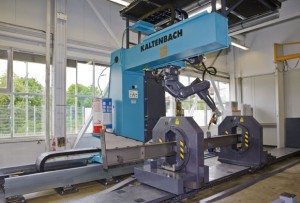 The KWR 601, a newly developed robotic welding system, shown for the first time at IPS 2011. It enables perfect seam, robotic welding of lugs, end plates and webs or similar items to columns and beams

On show for the first time was the KBS 2101 DG, Kaltenbach’s largest high power band saw. This machine can handle welded beams with dimensions up to 2,050mm × 800mm, has a bevel facility and can swivel via a CNC control.

The company’s entire drilling machine range (KDE, KDM and KDL machines) has been redeveloped during the last couple of years resulting in efficiency improvements across the board. Kaltenbach’s flagship KDL series now has a tool magazine with six tools in each of its three working axes. The series of drilling machines can handle beams up to 2,000mm × 700mm in size.

Another new addition to Kaltenbach’s offering is the robot welding system KWR 601, which can automate existing manual assembly processes.

Continuing the automation theme, the KF 1606, a fully automated plate processing centre with a robot for part removal and sorting, was also on display. This machine has been developed specifically for the demands of fabricators and stockists, where accurate profiles and drilled, counter-bored and tapped holes can be rapidly achieved in strip-fed material from 6-60mm thick and up to 1.6m wide, using acetylene or high-speed plasma.

Speed and efficiency are combined with the new KKS 463, a universal circular sawing machine. A continuous one-piece machine box enables the aberration-free alignment of automatic feed, saw and the cut-off gripper. This is said to create the right conditions for highly precise cut-offs.

KKS 463’s material feed gripper has robust linear guides and is driven by ballscrew spindles with brushless servomotors. The machine’s positioning speed is automatically selected depending on material weight, but it can reach speeds of up to 60m per minute.