Posted on November 1, 2002 by NSC2 in Projects and Features, Publications 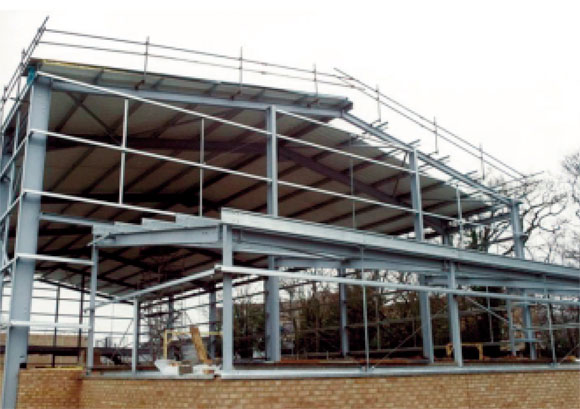 October 2002 saw the publication of a new SCI Guide for Single Storey Buildings in Boundary Conditions. This publication replaces The Behaviour of Portal Frames in Boundary Conditions, SCI P087, which has been an industry standard for many years. It is the result of a two year project, funded jointly by Corus and DETR under the Partners in Innovation programme. The method of dealing with the design problem in the new guide remains largely unchanged, although the scope of the guidance has been extended to include trusses, and additional guidance notes have been included to give more detailed guidance in the application of the method to common building types.

Background to the revision

As single storey buildings did not otherwise require fire protection to the structure, the stability of external walls, if the rafters collapsed, was an additional design consideration for steel portal frames. The problem arose as the continuity between the column and the rafter meant that they were considered by many building regulators to be a single element of structure and, as such, if one part required fire protection the whole element required it. This became rather onerous when applied to portal frames, as effectively the whole frame required fire protection.

This situation prompted The Constructional Steel Research and Development Organisation (CONSTRADO) to conduct an investigation into the performance of portal framed buildings in fire, which resulted in the publication of a design guide. Following the creation of the SCI, this led to the issue in 1990 of SCI publication P087, The Behaviour of Steel Portal Frames in Boundary Conditions. This publication was specifically produced to provide designers with an alternative means by which to ensure that the external walls of the building, affected by a boundary condition, remained stable during a fire and that they were not pulled over by the collapse of the portal rafter. The method adopted was to calculate the overturning moment due to the collapse of the portal rafter on the base of the columns that support the boundary wall. It is more economical to design the foundations to resist this force than to provide fire protection to the portal rafter. This publication ensured that portal frame construction remained an economically viable solution for single storey buildings.

The aim of the PiI project was to update and to increase the scope of the original publication to address better the needs of the construction industry. The issues that needed to be addressed were identified from feedback received by the SCI from designers and fabricators of single storey steel framed buildings who had experience of using P087. The new guide will provide designers with an increased level of certainty that their final designs will meet the requirements of the current Building Regulations and provide clear guidance on how to achieve economic designs for basic portal frame and other single-storey building types.

Designers, regulators and clients should all benefit from having standardised solutions that can be adopted on an industry-wide basis. For designers and clients this will reduce the risk of encountering delays in receiving approval of their designs from the local authority or the risk of an unforeseen increase in costs due to fire requirements that were not envisaged at the start of the project. For building regulators, the benefit is clear design that should reduce the need for lengthy discussions on the acceptability of proposed designs.

A steering group advised on issues that needed to be investigated and evaluated the practicality of the proposed solutions. The group included members from all interested parties – fabricators, designers and regulators.

The most significant change to the guide is the removal of the requirement to consider wind loading on buildings higher than 8m to eaves. This change followed a review of current combination rules for actions in Eurocode 1: Basis of design and actions on structures. The rational behind this change is that as fire is of a relatively short duration the probability of a fire occurring simultaneously with significant wind loading was thought to be relative low. Where wind loading is not the primary variable action, EC 1 recommends that wind loading is ignored in the case of fire. This should reduce the economic impact of design for boundry wall stability in buildings which would previously have been designed for wind loading using current guidance.

As a result of this work, this recommendation has also been adopted by the committee drafting the revisions to BS 5950-8.

Central to the new guide is the fundamental method of calculating the overturning moments on the boundary columns due to the collapse of the roof structure during a fire. It is assumed that a fire occurring in the building will be of sufficient intensity to cause the roof structure to lose more than 90% of its strength. The rafters are assumed to deflect to a position below the top of the columns and effectively be suspended like a catenary (fig 1).

Fig 1: Deformed shape of a portal frame in fire

A similar method has been added for calculating the overturning moment on a mono-pitch portal frame. Previously, due to the complexity of the calculation method, an approximation had been used. The overturning moment was expressed as a percentage of the moment capacity of the column. However, changes in the type of cladding systems commonly used meant that this original approximation was no longer valid and it was decided to include a full calculation method for this type of frame.

The change of emphasis in Approved Document B from prescriptive to performance requirements has prompted local authorities to question the stability of boundary walls in single storey buildings with trussed roofs. Trusses will behave in a similar way to portal frames and there is no logical argument why the stability of the external walls affected by a boundary condition should not be considered in their design.

Fig2: Deformed shape of a lattice rafter in fire

For the first time, the new publication provides guidance for the calculation of overturning moments for frames with trusses. The model used is basically the same as for portal frames with some modifications. The fire within the building is assumed to cause the truss to deform to such an extent that its top chord will be below eaves level as shown in Fig 2. In this position the rafter will exert a horizontal force on the top of the column. As is the case with portal frames, this horizontal force will exert an overturning moment on the base of the column, which the column base must be designed to resist.

In fire, a portal rafter will retain some of its moment capacity when heated which will reduce the magnitude of the horizontal forces applied to the columns. However, in the case of a truss, where the ability to develop significant moment capacity is dependent on internal compression members, the bending capacity has been ignored when calculating the overturning moment. This assumption reflects the fact that, at elevated temperatures, the buckling capacity of these members will reduce more rapidly than the bending capacity. As a result the overturning moment for a building with a trussed roof will generally be as much as twice that for a portal rafter with the same span.

Fig 3: Fire in a lean to structure

Often designers have greatest difficulty in applying these recommendations to buildings that deviate from the basic form of single storey building and where other fire resistance requirements may come into play. In order to assist designers, two of the most common variations, buildings with two storey sections and buildings with lean-to structures (fig 3), have been dealt with explicitly using design scenarios that consider different arrangements of boundary conditions and compartmentation. In addition to considering the stability of boundary walls, advice is also given on measures to prevent a fire in one compartment affecting the stability of the compartment walls or causing disproportionate collapse, which could result in the collapse of the structural frame extending beyond the compartment of origin. 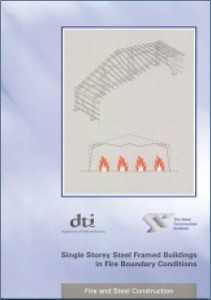 Sprinklers provide an important benefit when designing single storey buildings affected by boundary conditions. The ability of sprinklers to extinguish fires at an early stage of their development, or at least to inhibit their development, will lead to much lower temperatures in the fire compartment.

In the event of a fire occurring in the building the effective operation of the sprinkler system will significantly reduce the risk of fire spreading beyond the building of origin. An assessment of the probability of the effective use of sprinklers shows that rafter collapse is unlikely and the need for base fixity is reduced.