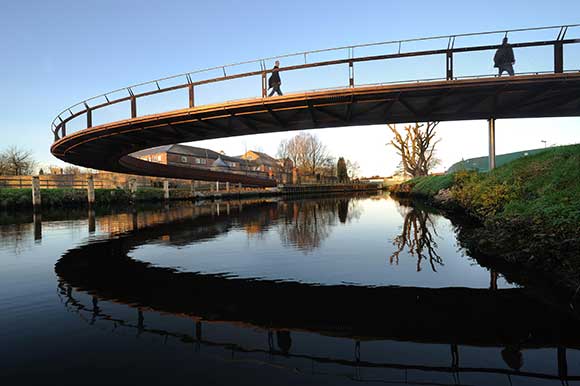 The bridge was erected in three large sections 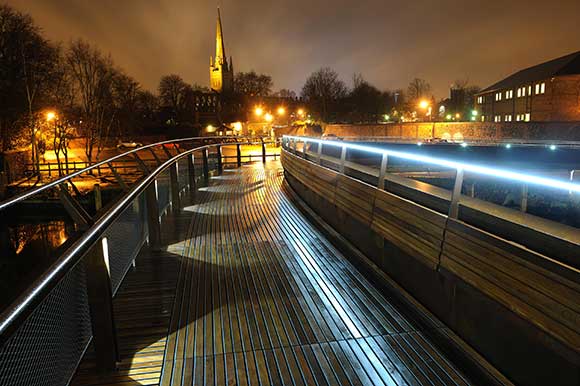 Remote light sensors turn the bridge’s illumination on when required.

Winding its way through Norwich, the River Wensum has always played a significant role in the city’s history and livelihood. Numerous bridges have been constructed over the years linking the various parts of the city, helping to increase trade and facilitate better transportation links.

The latest addition to Norwich’s catalogue of bridges recently opened and created a large amount of local and national interest. Known as Peter’s Bridge, this new pedestrian and cycle crossing links the historic city centre with the new Barrack Street Development, and was named after and conceived by local businessman Peter Jarrold, former chairman of Jarrolds (St James).

The project’s brief required a structure that would make the most of the distant views of the cathedral and touch the ground lightly on both riverbanks, while causing minimal environmental impact on the natural environment.

“The concept was for a bridge that was slender, with sweeping curves derived from the unique features of the site and the imposed clearances,” explains Stephen James, Ramboll Associate. “The final design is a dynamic and unique bridge form that appears to float over the site with little visible means of support.”

Early in proceedings a number of schemes for the bridge were looked at, with a steel composite design winning the day. Structural steel incorporating a hardwood deck ticked all of the client’s boxes.

The main structure is fabricated from weathering steel which was chosen primarily for its aesthetic. The material develops a deep brown coating over time, which will be in keeping with the structure’s semi rural location.

Weathering steel also brings a number of maintenance and environmental benefits to the project. It should require no painting during its 120 year lifetime, negating the need for any work taking place over the river and lessening the chances of spillages into the eco-system.

Structurally the 90m span bridge consists of a curved primary box beam which carries cantilever supports for the decking. A closed steel box beam represented the optimum form to resist the bending and torsion experienced by the deck and allowed the designers to manipulate the cross sectional shape to achieve the required aesthetic and structural form.

The box beam is also the spine of the bridge, and all load from the deck and balustrade is transferred to the cantilevering cross beams. This then applies torsion and bending to the girders, the torsion in one arm of the bridge being resisted by the bending capacity of the other.

Horizontal loading is resisted as the bridge acts as an arch, supported by bracing which ties the box girder, the edge beam and the cross beams together. A tuned mass damper located inside the spine box girder at midspan dampens vertical accelerations induced by resonant pedestrian loading. 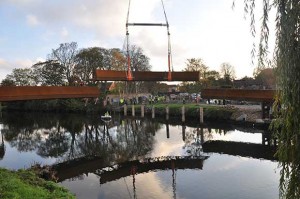 The mid span section is lifted into place

The bridge is supported at the two abutments and on two slender stainless columns which accentuate the impression of the bridge floating over the water. At each abutment there are two bearings; one fixed uplift bearing located below the box girder and one sliding guided bearing under the balustrade end of each bearing beam. This provides a vertical, lateral and torsional restraint at the abutments.

Steelwork contractor SH Structures fabricated the bridge steelwork in five sections for ease of transportation to site. Once delivered, they were set up on temporary trestles, with the two midspan sections then welded together which resulted in three bridge segments.

During fabrication a lot of emphasis was placed on off site manufacture, and to this end site welds were minimised. SH Structures advised Ramboll throughout the design procedure about buildability of the bridge and also designed a bolted splice connection at midspan to remove any need for temporary works to be placed in the river during the erection process.

“Using a 1,000t capacity crane the bridge was very quickly erected,” says SH Structures Contracts Manager Dave Perry. “We initially installed the two abutment sections and supported them on temporary works, then during the following day we installed the large central span.”

A large proportion of the timber decking was installed prior to the lifts and although this resulted in the need for a larger crane, it minimised the amount of work needed to be done over the water.

“This bridge is a glorious addition to the many Norwich bridges constructed over the years. It is a sophisticated construction in wood and weathering steel with a very pleasing shape in the form of a J,” sums up Mr Jarrold.