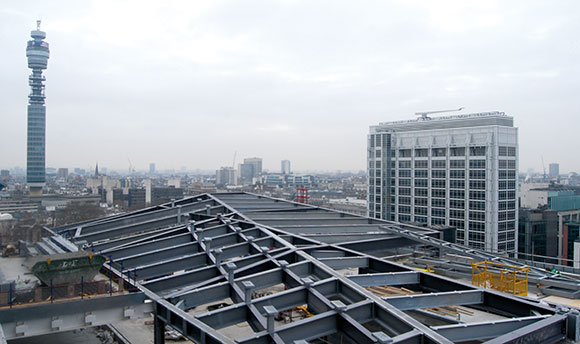 A large mixed use scheme currently being developed near Regent’s Park in London is relying on steel construction’s inherent qualities for its commercial and retail elements. Martin Cooper reports. 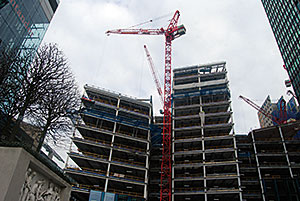 Located along central London’s Euston Road, Regent’s Place is a 13 acre, fully managed estate which is currently home to some 10,000 workers and residents. Comprised of 450,000m² of office and residential space, within seven buildings, the estate is set to expand significantly with the delivery of a new mixed use development known as the North East Quadrant (NEQ).

When complete in 2013, this key component to the overall masterplan, will provide a further 152,000m² of new development to the site, including office space, retail levels and 100 apartments within a separate 26 storey concrete tower.

The commercial and retail portions of the NEQ will be housed in a large and architecturally impressive steel framed structure, overlooking the development’s main plaza. This building consists of three interconnected fingers, featuring floor to ceiling glazed external cladding, and linked by two atria. 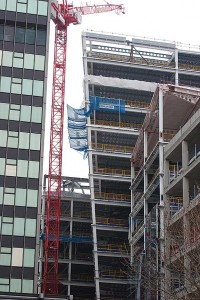 The central finger structure has a skewed and leaning façade

The central finger is the tallest portion of the commercial zone reaching a height of 15 storeys and flanked by 10 storey and eight storey finger structures. Visually the front elevation of the 15 storey portion offers the most impressive element of the NEQ. It has a leaning façade, which is skewed to the rest of the building, further accentuating the four degree lean.

This façade played a significant role in the overall steel design. Stability for the steel frame is provided by three cores, one in each finger, however the central finger’s core is located towards the back of the structure, far from the leaning façade. Consequently the steel frame would have had a tendency to pull itself towards this southern elevation and so to negate this, moment frames have been positioned on the upper levels of the leaning façade, mitigating any potential structural sway.

The reasoning behind the location of the central finger’s core is all to do with efficiency.

“The initial steel design had the main core positioned centrally, a location which wouldn’t have required us to design moment frames,” says Keith Davidson, Halcrow Yolles Project Engineer. “However, by moving the core back we gained more high value floor space.”

The moment frames begin at level nine and extend to the uppermost 16th roof level. Heavier plate girder sections have been erected, to form the moment frames, instead of the regular columns used elsewhere. These stiffen this elevation by providing additional lateral stability and limiting inter storey drift. Some of the project’s heaviest individual steel members are located in the upper frames, with some girders weighing in excess of 9t.

Each of the three fingers is topped by a pitched and skewed steel framed roof. Structurally independent from the steelwork below them, the roofs are formed from a myriad of pieces, more than 150 for the two outer roofs.

The roofs also act as moment frames, together with the frames below. Some substantial beams have been used on these roofs as they also have to accommodate the loads from Building Maintenance Units (BMU), which clean the external elevations and travel across the roofs via a track. Larger section sizes also had to achieve the stringent perimeter deflection criteria associated with the glazed curtain wall finish of the structure.

“Because of the core’s position and the fact that all elevations feature open glazed areas bracing was out of the question, which was another reason we had to include moment frames,” explains Mr Davidson. 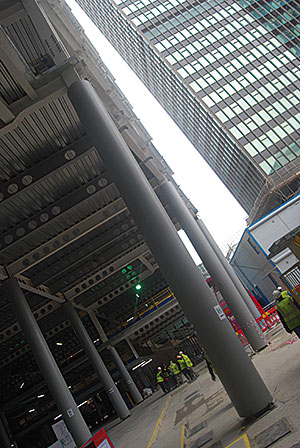 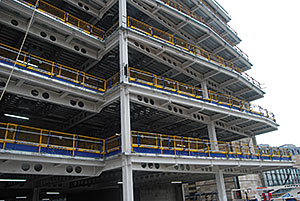 Meanwhile, large diameter 13m-high tubular columns dominate the ground floor area of the central finger. “These columns were fabricated with an H-section beam inside, as the CHS section is purely architectural and is just a shroud for the main column,” says Peter Hayward, William Hare Senior Site Manager.

Three tubular columns along the southern elevation are cranked outwards and start the leaning façade. Above this, the feature lean is continued upwards with regular columns. A further row of three tubular columns, positioned in a line adjacent to the perimeter members, are cranked in the opposite direction, balancing those at the front and forming one side of a large void which extends up to level 10, within the central finger. As the columns are cranked (leaning) in opposite directions the floor plates gradually get larger from first floor to 10th floor, while conversely the atrium void gets narrower.

Overall the steelwork has predominantly been erected around a standard 12m x 9m grid pattern, giving the office levels the desired long clear spans. This pattern does slightly vary towards the top of the central finger where there are some 15m spans due to the cranked façade. Cellular beams have been used throughout the construction of the three fingers, chosen for their economical weight. Openings within the beams were fully coordinated to suit the building’s services, while keeping the structural void to a minimum.

The proposed construction of the NEQ has quite a long history and designs were first conceived nearly ten years ago. The recession saw plans put on the back burner for some time, until work finally kicked off in earnest during 2009. Construction manager Lend Lease began working on site in December 2010, taking over a cleared site which had been piled and had its concrete basement levels already formed. The company oversaw the laying of the ground floor slab and the construction of three concrete cores, in readiness for the steel erection.

“The steel frame was designed in early 2011 and within four months it was being fabricated and delivered to site. With good planning and coordination between all team members, including the installation of the cast-in plates in the cores, William Hare were able to hit the ground running and consequently the steel has been erected without any hitches and on schedule,”  sums up Adrian Richards, Lend Lease Project Manager.