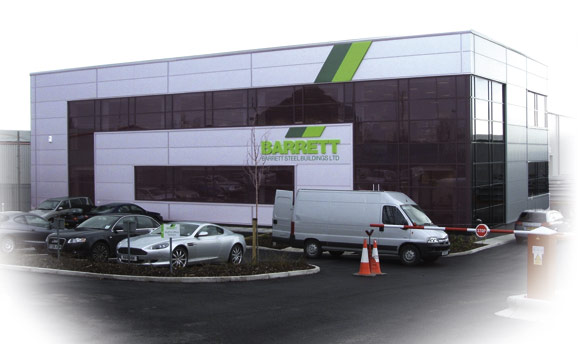 Barrett Steel Buildings has created a state of the art facility that fully integrates design and fabrication. Nick Barrett reports on what a modern fabrication operation can now achieve.

The dramatic success of steel in the construction market over the past twenty years has been in large part due to the remarkable productivity improvements made by steelwork contractors. The ever improving ability to respond to customer’s demands for quality, short lead times with just in time delivery and work carried out off site to the most exacting tolerances – matched by an equally high performance on site – looks like being a feature of the success story for the next twenty years as well.

Barrett Steel Buildings aims to be at the forefront of productivity and quality improvements to come, with a new state of the art production facility being opened this month in Bradford. The new workshop extension might not be the largest in the industry, but Barrett plans that a unique, bespoke layout and use of the latest steel processing machines will place them at the leading edge of productivity and quality advances.

The workshop, adjacent to a new purpose built company headquarters, positions Barrett strongly to continue with ambitious growth plans which have seen turnover grow from £13.5M in 2003 to £26.4M in 2005. The target of £30M for 2006 should be easily reached. The development represents a £4M investment, including over £1.3M on new machines alone.

“We spent six months studying the market to determine exactly what the implications of the various machinery available were,” explains Managing Director Richard Barrett. “It was a complicated, iterative process. We visited the United States and suppliers in Europe to see machines in operation.

“We wanted a supplier who would be our partner for the next ten years or so. All options were considered before we settled on machines from FICEP. Once we decided what the ideal configuration would be we designed and built the extension around the machines, rather than try to fit the machines into a pre existing shed.” 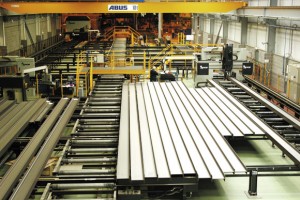 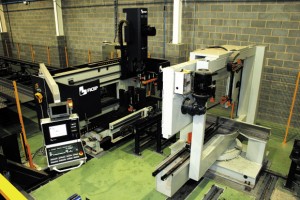 The new machines are described by Barrett and FICEP as state of the art. Mr Barrett said:’ The machines will allow us to reduce overall production costs and increase output, but most importantly we will be able to offer customers a better service.”

Mr Barrett is particularly impressed by the new coping machine which has a plasma cutting head with a robot arm. “It is the most intricate machine here and there are only one or two more in the country like it,” he says.

The big differentiator between the competing systems in the marketplace, Mr Barrett says, is their IT sophistication. “This equipment is completely integrated with our IT. We use a Tekla CAD package linked to Fabtrol production control software that means we can route any job to the optimal machine.

“We have bought new software from Tekla and Fabtrol as well as FICEP. FICEP appreciated that we are IT competent so we developed the software with them. We have modified Tekla software to download design information from our own design office. There will be less human error in the marking process as the machine will do it all now.”

The new line will have three men for the main preparation bay to carry out blasting, sawing, drilling and coping operations, releasing operatives to work in the assembly area. “There will be a 24% efficiency increase,’ says Mr Barrett.

Operatives are being trained by FICEP in Italy, and FICEP also provides a two-year service package with the purchase. “FICEP view the set up here as a showcase for their machines so we will be allowing people to come and have a look for themselves.”

Productivity and quality are not the only drivers. There has been a lot of safety related input to the design as well: the new warehouse is racked to the most modern standards; light beams can shut machines down if interrupted in improper ways; bridges have been supplied over conveyors to allow safe passage from one side of the process line to another.

The new headquarters building houses multi disciplinary teams on two floors, with the single storey design team on the ground appropriately enough, and the multi storey team upstairs. “We have a high level of design competence which means we can offer a design and build service for sheds and medium rise multi storey buildings,” says Mr Barrett. “We can switch production between 100% sheds and 100% multi storey, and everything in between, so whatever the market wants we will be able to supply. Our 100% commitment to design and build and emphasis on design for manufacture, will enable us to maximise the benefits of our new investment”.

Growth areas include residential: “We did seven residential buildings in Birmingham alone last year. Other recent projects have included a ten-storey building. Healthcare and schools are also providing steady demand.

Other planned investments for 2006 include speedlines for the production area and further improvements in painting and dispatch.

State of the art 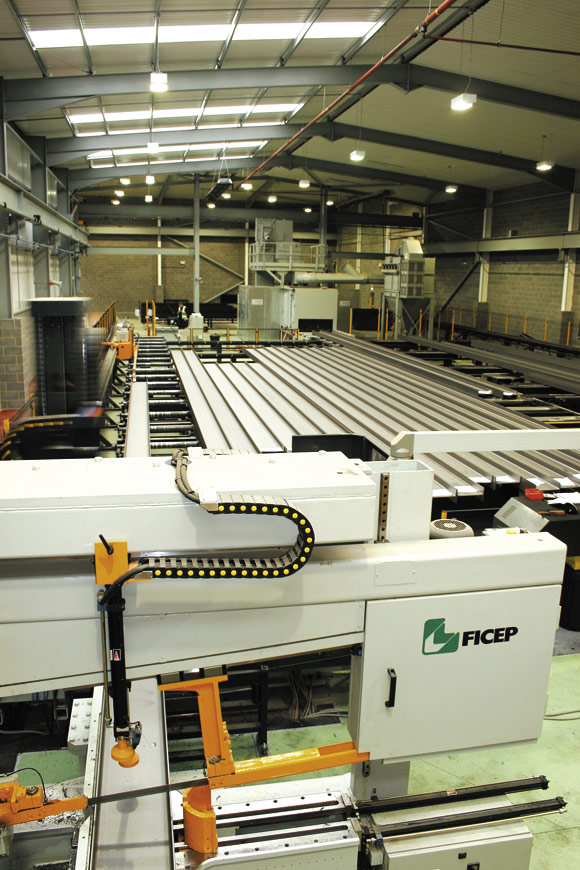 The Orient 11 with the Schlick RB 1500 in the background

“This is state of the art machinery which represents significant advances on what was available previously,” says Ficep Managing Director Mark Jones. “Barrett Steel Buildings has made a significant investment in this new facility and have agreed that we can use it as a showcase for what is now possible.”

The Orient 11 is described as an advanced, high performance monospindle drilling machine, equipped with a CNC controlled rotating head that can drill beams and profiles on three sides (flanges and web).  The Orient 11 is said to be as productive as a more expensive three-headed machine on certain applications, but is much more efficient when frequent changes of profile are called for.

The presence of only one spindle does not affect line productivity but dramatically reduces auxiliary and set-up times, especially when processing beams of different sizes in sequence. In this case no complex set-up operation is required, the operator simply enters the new dimensions on the user-friendly “ARIANNA” CNC console.

The rotating head is mounted on the vertical slide and can be orientated in three working positions (vertical and horizontal on the left and right) and rotates at 2,500rpm. It is equipped as standard with a six position linear tool changer designed to accept any kind of drilling, milling or tapping tool with ISO 45 connections, and capable of drilling holes up to 40mm diameter. A coolant system is incorporated whereby the choice of lubricant occurs automatically depending on the tooling used.

The workpiece is clamped by a series of CNC controlled rollers designed to allow efficient controlled movement of the beam through both the horizontal and vertical jaws. At first a stronger force is applied initially for the Y axis, but instead of having to open the jaws to adjust and position the X axis, the pressure is simply reduced slightly by the CNC, allowing the bar to move to the new position where a stronger clamping action is applied, permitting drilling to commence. This offers a significant increase in production output.

Thanks to Field Bus operating protocols, all the electronics and CNC controls are built into the Orient 11, dispensing with the need for separate large control cabinets and external electronic connections. “This increases reliability and reduces the overall footprint of the machine,” says Mr Jones. The CNC controls operate from a single motherboard that reduces costs and allows only that that part of the software that needs to be activated, increasing the machine’s performance and user friendliness.

“The flexibility of the Orient 11 makes it the most versatile in our range of drilling lines,” adds Mr Jones. It is the first machine in the range to offer a complete marking system that scribes assembly information or characters onto the beam using the effective spindle and patented technology to mark all facets of the profile. With the option of a second smaller spindle the beam can be marked underneath. The restrictions of marking on only one side of a beam are eliminated.

The scribing information can make lines, weld symbols, logo’s and measurements removing time consuming and laborious marking out phases from the fabrication process in the workshop. Having no need to produce drawings for fabricators, this process allows faster productivity and less need for reliance on skilled personnel to do the setting out.

A Schlick Roto-Jet, a 1,500 mm wide shot blast line, complements the three FICEP machines. Mr Jones says: “FICEP are exclusive agents for Schlick machines, and this model was chosen by Barrett as it offers outstanding performance with the new ‘ETA’ turbine wheels which offers increased blasting speed to efficiently clean the material before processing through the new purpose built production facility, while at the same time reducing overall costs of maintenance.”

SCHLICK roto-jet® roller conveyor shot blast machines are easy to use and provided the results required by Barrett. Plates, sheets, beams, sections, pipes, and tubes can all be descaled and cleaned simply by loading the pieces, pressing the start button, and unloading the finished product after a short cycle time.