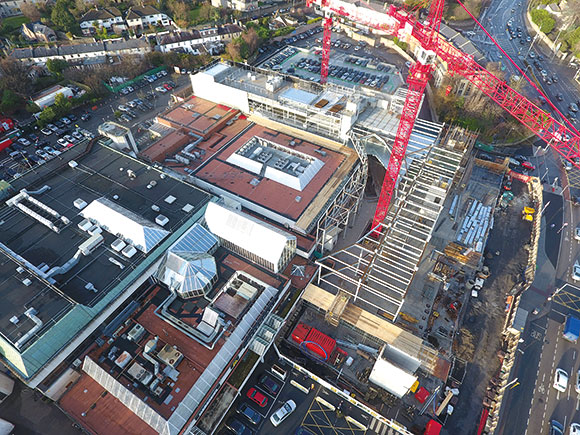 A large retail extension and refurbishment programme, with added flexibility, is being carried out at the Frascati Shopping Centre in County Dublin.

With two prominent red tower cranes on site, the extension and refurbishment of the Frascati Shopping Centre in Blackrock, County Dublin, is easy to spot above the suburban rooftops.

The initial work, involving a new multi-storey car park, has already completed and the remaining phases, which involve the use of structural steelwork, are due to be delivered over the course of this year, with the final phase to be completed by December.

The shopping centre’s owner Invesco Real Estate – a global investment manager – is spending more than £26M to increase the size of the centre from 9,290m2 to 15,793m2 in order to broaden its appeal to national and international traders.

The tenant mix at the centre is set to evolve and improve as a result of the strong anchor tenants in place, as well as the additional sizable units that the development will offer.

Current anchor tenants Debenhams and Marks & Spencer will be joined by Aldi later this year. 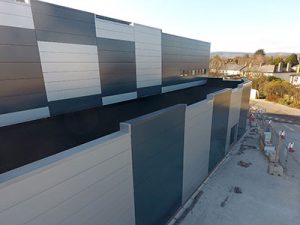 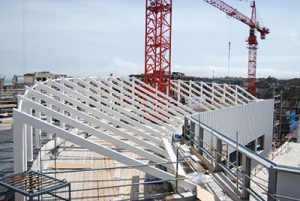 When complete, the new Frascati Shopping Centre will be a landmark on one of the most important routes connecting Dublin city centre with its south-eastern suburbs.

The new retail extensions are all compositely designed with steelwork supporting metal decking. Stability is gained from a combination of concrete cores and cross bracing, primarily located within partition walls, but some will be visible behind shopfront glazing.

Although they do link into the existing shopping centre, the new build extensions are entirely structurally independent, with three movement joints separating them into three structures.

“The old centre is a mix of concrete and steel construction, as it has been expanded over the years,” says Barrett Mahony Director John Considine. “But when it came to designing the extensions, a steel frame was the only option as it offers the flexibility to change and alter shop layouts, and it is quick to build with.”

The first point has been fully tested, as a couple of tenants have requested alterations to their already constructed retail units, and this has required some new service openings to be formed by cutting through the metal decking.

Another reason for choosing a steel solution is the fact that this is a very congested site surrounding an operating shopping centre, visited by thousands of customers every day.

“Steel is fabricated offsite and arrives ready to be erected,” adds Mr Considine. “On a busy site like this a concrete option, with all of its associated formwork, would be very undesirable.”

Steelwork contractor Steel & Roofing Systems (SRS) will fabricate, supply and erect 850t of steel for the project as well as installing all of the cladding and metal decking.

The cladding consists of 1,400m2 of Kingspan Benchmark Evolution along the front of the new extensions and a further 1,200m2 of Kingspan RW panels on the back-of-house areas.

SRS has divided its steel erection programme into four phases, with the first three all wrapping around the existing centre along two elevations, and the fourth phase consisting of 50t of steel to create new storage space for the existing M&S store.

The initial phase was the Aldi store which is a large braced box containing a ground floor shop, first floor storage area and office, and a further mezzanine level office space. The Aldi structure features one line of internal columns and has spans of up to 13.2m-long. 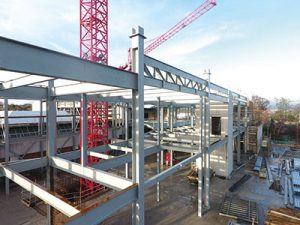 Extra floors can be added in the future 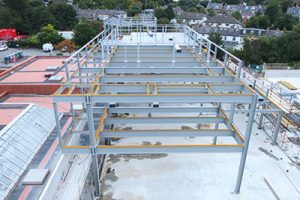 Steel was chosen for its flexibility

Phases two and three are both two levels high and include the remainder of the new retail outlets and also a glazed atrium and new mall entrance. The atrium has a maximum width of 9m, and its roof is formed with a series of cranked 250mm × 100mm RHS members that support the glazing.

“Part of the phase three works requires us to undertake a return visit later this summer as some existing stores need to be demolished prior to the steel frame being erected,” explains SRS Project Manager Conor Whelan.

Some added flexibility has been designed into phases two and three as three more floors of steel-framed apartments could be added in the future.

Mimicking the retail zone and basement car park’s 8m × 8m grid, the pattern will be repeated in the residential element and column stubs have been left on the rooftop steelwork to facilitate the installation of this further extension.

Although the residential part has yet to gain planning permission, it was designed into our original scheme,” says Mr Considine. “So in order to accommodate it we have larger foundations and larger steel columns than would otherwise be needed.”

Adding some extra architectural highlights, the phase two and three areas have steel cantilevers along the front elevation. The largest of these cantilevers, at 4m-wide, covers an area of two bays (16m) and overhangs the main entrance to create a column-free pedestrian thoroughfare.

Summing up, Louise Donnelly of the project’s real estate agency Cushman & Wakefield says: “We are already experiencing a strong level of interest in the scheme, particularly from food and beverage operators.

“It is a very exciting time for the people of Blackrock and surrounding areas and, once completed, the centre will provide an enhanced shopping experience for the immediate catchment area.”