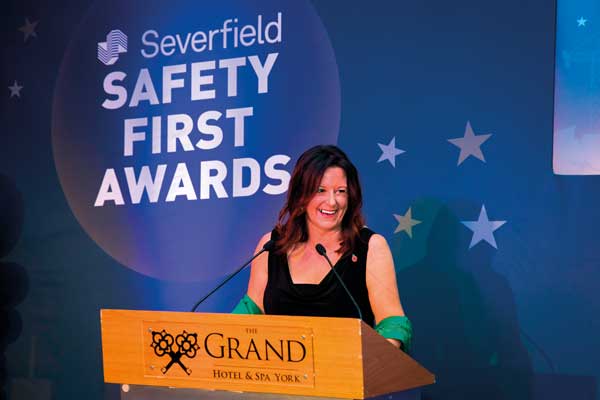 Held at The Grand Hotel and Spa in York, Severfield hosted its first-ever safety awards, which celebrated the highest standards of health, safety and environmental management across the business.

Over the course of the evening, seven awards were handed out – starting with three team awards. These recognised a factory, construction and subcontractor team that demonstrated an outstanding commitment to achieving ‘Safety First’.

These were followed by Innovation, Outstanding Achievement and One to Watch awards, concluding with a special Chairman’s Award.

Phillipa Recchia (pictured), Group SHE Director for Severfield, said: “From a safety point of view, there are so many great things happening within the business and we see our people living up to our safety values every day, and it’s for that reason that we felt the need to recognise the efforts and achievements of our staff. It’s about saying a personal thank you from the company because, at the end of the day, it really is our people that make all of the difference.”

Ian Cochrane, Severfield Chief Operating Officer, added: “This is only the start of the story. What’s important is how our winners inspire their colleagues around them, and across the company, and go on to become ambassadors for our health and safety culture.

“Safety is our number one priority at Severfield, with everyone having a role to play. That’s why events such as this are so important to recognise the achievements of teams and individuals who go above and beyond to ensure everyone goes home safely, every day.”

The award winners were: