Rebirth of a market 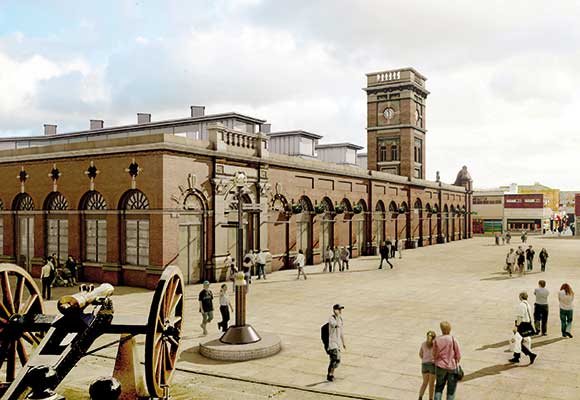 The completed market hall will form the centrepiece for the town’s regeneration.

New steelwork has proven to be the economical and cost effective solution for a renovated Victorian market hall in Greater Manchester.

A devastating fire in 2004 ravaged the Victorian Grade II listed market hall building which up until that time had been Ashton-Under-Lyne town centre’s focal point.

The red brick market hall was originally built in 1830 with structural enlargements taking place intermittently over the next 50 years. This resulted in a building with a highly irregular five sided shape (pentagon).

The old building’s distinctive timber roof, supported by wrought ironwork was completely lost because of the fire. However, the walls and clock tower were saved and these have been incorporated into the redesigned building which is topped with a new steel framed roof

Prior to construction work beginning in January 2007, the external facade was supported and propped with falsework. However, once the project got under way main contractor Laing O’Rourke underpinned and strengthened the external walls with a ring beam and new perimeter columns, negating the need for propping. A new basement area covering approximately one third of the hall’s floorspace was then excavated from within the perimeter walls.

Steelwork contractor Billington Structures was able to begin steel erection in November 2007, and initially installed steelwork to support a new slab above the basement area.

“Once this steelwork was up and the concrete slab cast we were then able to use it to support our cher- rypickers for the roof steelwork erection,” explains Stan Haslam, Billington Structures Site Manager.

Timing and sequencing with other trades has been a key issue on the project, with steel erection having to work around the concreting team in particular.

Because of the confined nature of the building, Billington erected one third of the steel roof while the concrete slab was being cast over the new base-ment. The steel roof was then erected above the new slab, with the middle portion of the roof erected last.

“Working in this way also allowed us to back ourselves out of the main entrance,” adds Mr Haslam. “Which was also the easiest way to erect the steelwork.”

David Westwell, Atkins’ Project Engineer, says the new internal design of the structure was altered from a predominantly concrete frame to a steel frame because of the need to erect it quickly and because of the limited space.

“The roof was always going to be a steel framed structure but supporting the new basement level was much quicker with steel,” he adds.

Supporting the new roof are five rows of steel columns and these support the angled (lantern) roof which is glazed to allow maximum daylight to penetrate into the market hall. The new steelwork is then tied into the perimeter concrete ring beam and the remaining concrete superstructure.

“The majority of columns will be situated among stalls,” says Mr Westwell. “So designing the roof supports wasn’t such a challenge, and the frame stability is derived from internal bracing and the perimeter superstructure.”

However, the structure’s irregular shape means the roof’s geometry is quite complex and Mr Westwell says the roof design had to incorporate a number of slopes, corners and angles. The apex and gutter levels of each roof slope are constant throughout the building, but on plan the gutter lines are not parallel. The roof plane therefore constantly varies across the structure.

Ashton market hall is scheduled to be open in time for this year’s Christmas shopping.