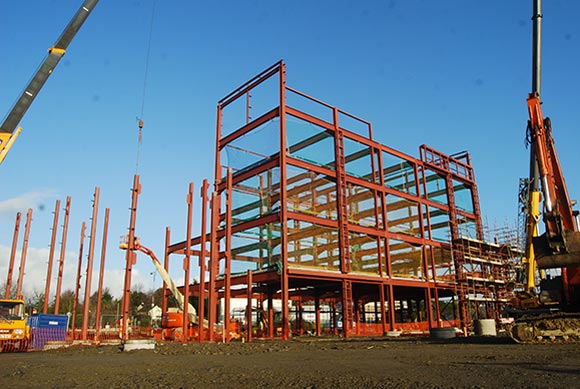 A flexible and cost-effective steel framed building forms the first phase of a large regeneration scheme at a former military base in Northern Ireland.

A number of significant changes have occurred in Derry-Londonderry since the signing of the Good Friday Agreement and the ending of the Troubles in Northern Ireland.

Over the last decade a riverside setting and an historic city wall have helped turn a troubled city into a regional tourist destination, something which was further boosted as Derry-Londonderry was UK City of Culture 2013.

One of the major focal points for last year’s cultural events was Ebrington, the former military base that is now linked to the city centre by the award winning Peace Bridge (NSC July/August 2012). The Ebrington site has been turned into a large public domain including a number of art galleries housed within some of the site’s many historic and listed buildings.

The redevelopment of the Province’s military establishments is a sign of the times and about a mile or so down the River Foyle from the Peace Bridge another base, formerly known as Fort George, is the location for the construction of the Northern Ireland Science Park – Innovation Centre, Derry-Londonderry (which, together with a facility at Letterkenny, forms the North West Regional Science Park).

Once complete later this year, the Centre will act as a catalyst for innovation in science and technology in the local area by offering bespoke research and office space.

The project will be another building of the highly successful Northern Ireland Science Park, based at the Titanic Quarter in Belfast, which steelwork contractor Walter Watson erected last year.

The client thought the five-storey steel framed Belfast project was completed so efficiently that the steelwork contractor was in a prime, and then ultimately successful position to undertake the similar Derry-Londonderry project.

Fort George was vacated by the military in 2001 and, because of its riverfront setting and proximity to the city centre, it has always been earmarked as a prime redevelopment plot.

Once the 14 acre site had been acquired from the military a lengthy remediation programme was required as significant amounts of pollutants such as heavy oils and diesels, as well as heavy metals needed to be removed. Heron Bros. started the construction of the 4,600m2 four-storey commercial and research building in early 2013.

Founded on driven steel bearing piles, the building has a bespoke steel frame design, combining both portalised and braced bays.

The majority of the building is formed with a twin span portalised frame, with moment connections adding stiffness to the structure. Further stability is provided by the building’s braced end bays that house the lift shafts and stairwells. 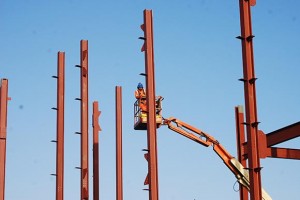 The building takes shape as columns get erected

Getting maximum flexibility from the building was one of the main client wishes for the project and a reason for its hybrid design says Sharon Dickenson, McAdam Design Project Engineer.

“With just one line of internal columns separating two 11m wide clear spans we’ve maximised the space and designed a building that can also be reconfigured to suit the occupants.”

The main building is essentially rectangular in shape, with the exception of a lean-to structure that accommodates the main entrance and staircase. Situated halfway along the riverside elevation, the main entrance is housed within an 11m long x 8m wide four-storey high lean-to steel frame, that connects back to the main steelwork.

Early in the design process a number of framing solutions were evaluated prior to steel being chosen because of its speed and cost benefits.

“Internally it’s a very economical building,” comments Nigel Barton, McAdam Design Project Architect. “While externally, because of its prominent position, it will be finished with high-spec natural stone and high quality metal cladding.”

The cladding will be held in place by being attached to a series of steel grillages that have been bolted to many of the structure’s columns. The grillages, which were fully welded prior to being delivered to site, are fabricated from 100mm × 100mm box sections and measure up to 3m long × 2m wide.

The steelwork programme is due to be completed later this month (January) and the Centre will open in September. 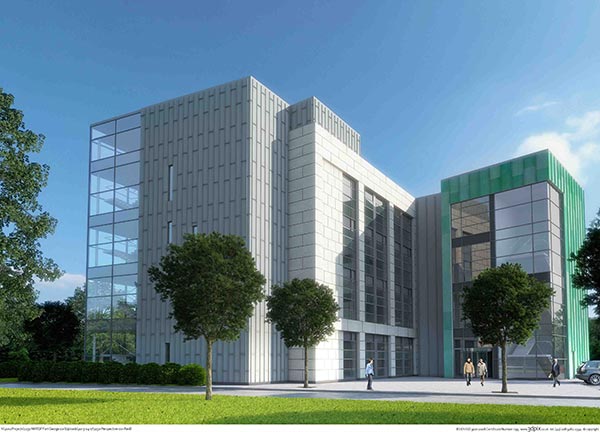 Owned by the Department for Social Development (DSD) the Fort George site has a long and distinguished history having served as a shipbuilding yard from the 1830s, a ship repair yard for Allied Forces’ vessels during World War II, a naval yard and then a military base from 1970.

It now forms an important part of the One Plan regeneration scheme, which aims to revitalise large areas of Derry-Londonderry. The site is located on the main arterial route into the city centre from the north and this prime plot will accommodate a prestigious technology park, the first phase of which is the Innovation Centre building.

According to the DSD, an eight phase scheme to be completed by 2023, could include a mix of office, education, research, residential and leisure buildings. Other developments will include a multi-storey car park, a new pubic realm and infrastructure improvements to roads and the waterfront.