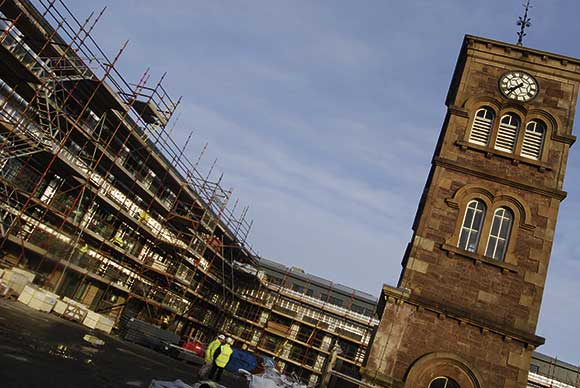 Flexibility, transportation and ease of construction played major roles in the decision to choose structural steelwork as the framing material for  six school projects on the Outer Hebrides, as Martin Cooper reports. 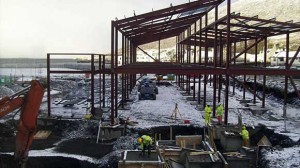 Construction projects on locations away from the mainland can present a whole raft of unique challenges, particularly logistical problems associated with delivering materials to site. Having to rely on ferries, whose timetables can be disrupted by the unpredictable British weather, can result in programme delays which need to be factored into the scheme  at an early stage.

These issues and many more have been encountered and successfully negotiated during the construction of six schools on the Western Isles (Outer Hebrides). All part of the same contract, the schools vary in size and location, but they all have one thing in common and that is a steel frame design.

The islands’ local authority is dealing with an ageing population and is committed to rationalising its schools stock. With funding from the Scottish Executive, the project will result in four new primary schools, all replacing older facilities, and the rebuilding of two secondary schools, with a combination of new build and partial refurbishment. There is a commitment to deliver new, modern, state-of-the art schools that are well equipped and secure places for young people of the Isles.

Daliburgh Primary School will be the final project to complete

Construction work on the various school project’s began in 2010 with the final building – Daliburgh Primary School – scheduled to be handed over in August. Initially the overall project consisted of five schools, with Daliburgh only included within the contract as late as March 2011.

Early in the design process steel was chosen as the preferred framing material for all of the project’s structures. A number of reasons were behind this decision, but as Frank Boyne, Goodson Associates’ Project Engineer explains, one of steel’s many attributes won the day.

“The flexibility of the material meant the schools were always going to be built with steel,” he explains. “All of the buildings needed to have spaces which could change configuration in the future, and this is achievable with a steel frame.”

Getting materials onto the islands and then transporting them across to far flung locations was also a consideration. Structural steelwork can easily be transported in small loads and this also lent itself as the ideal material. All building supplies and materials have to arrive by ferry and once on the Isles, the Hebridean roads are quite narrow and not suitable for large trucks. 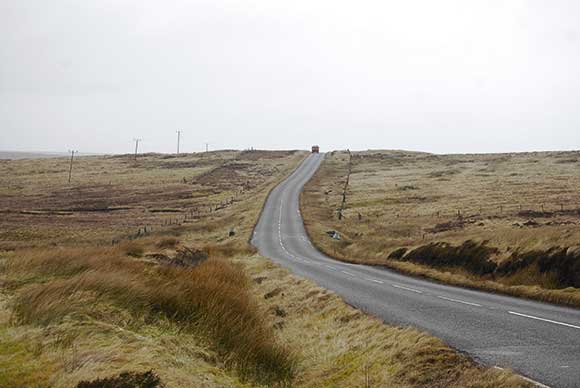 The road from Stornaway to Barvas, a typical Hebridean highway

“Logistics has been the greatest challenge on this project; organising the necessary materials and getting them to site on time,” explains FMP Operations Manager Warren Wright. “We also had to find and organise a local supply chain, but as the project has progressed everything has become simpler and we’ve gained more and more experience of the locality.”

All 1,900t of the required structural steelwork was fabricated by Walter Watson and then delivered to site from its Northern Ireland facility via road and sea.

The company also supplied its own cranes and cherrypickers to erect the steel, using a local crane hire company at peak times.

The Hebridean weather has also been a major factor for the project. Being situated off the west coast of Scotland the islands quite often have a milder climate than the mainland, usually free of ice and snow. However, fierce winds regularly batter the Isles, stopping the local ferry services and preventing many outdoor trades from working.

“Wind was a challenge during the steel erection programme,” says Trevor Irvine, General Manager Structural Division for Walter Watson. “During October and March the weather was particularly windy, too blustery at times to erect any steel, and we lost about three days in both months.”

Nicolson Institute is the largest school on the Isles

The biggest scheme in the contract is the Nicolson Institute, which is the largest secondary school in the Western Isles and located in Stornoway, less than a mile from the town’s ferry port. One of the easier jobs to get materials to, the scheme required 900t of structural steelwork for a new three storey structure.

This building (which will replace the nearby existing Nicolson Insititute buildings) has a central core accommodating a games hall and assembly area, with four attached teaching wings radiating off of it. Adjacent to the new build is an existing listed structure known as the Pentland Building, as part of the project it is being refurbished and will be linked into the new school building via a covered steel framed walkway.

The new building will ensure pupils do not have to travel from one building to another for classes as all of the departments will be under one roof, which has been one of the client’s aspirations throughout the design process.

The design of the classroom blocks revolves around a regular grid pattern, although as previously mentioned, many of the classes could be reconfigured in the future to form larger or even smaller spaces.

For stability the structure has steel braced staircase cores, with some further bracing placed along elevations where there are no windows.

A nearby gas terminal meant the school’s steel design had to incorporate blast loading, in order to withstand a worst case scenario of an explosion. “To this end we added more and heavier bracing in the cores than would normally be required and upgraded the detailing of the frame for a greater robustness,” says Mr Boyne. 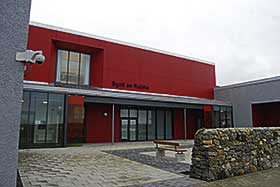 Point Primary School was the first school to be handed over

Also on the Isle of Lewis are two primary school projects, Point Primary School at Bayble and Westside Primary at Barvas. Both are of similar design, featuring a single storey square structure containing a central enclosed courtyard.

Point was the first project to be completed and was handed over to the client at the end of last year. The Westside project kicked off a little later and is due for completion this month (March).

Being single storey structures they lend themselves to small steelwork loads, as no single member is longer than 8m. Bracing provides the frame’s stability and this is mostly located in elevations, as many of the partition walls feature sliding doors which give the schools the required flexibility. The schools also feature indoor multi use games areas, separated from an adjacent dining room by a sliding partition, allowing the area to be opened up into an even larger zone. 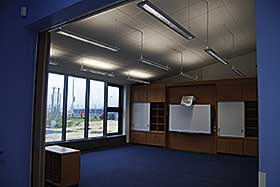 The elements have played a significant role in each of the school projects and Westside Primary is no exception. “The steelwork erection was initially programmed to be completed in 10 days,” says Liam McAuley, FMP Site Manager. “However we had some extremely windy weather and for three days no steel could be erected, but all of the school’s 150t was still up in 14 days, which was good going.”

The second largest job within the overall contract, which was completed last December, is Sir Edward Scott School in Tarbert, Isle of Harris. Requiring 300t of steel, the building is a combined primary and secondary school consisting of a three storey high braced framed structure built around a courtyard.

A swimming pool and community building was recently completed on the site and the new school structure ties into this building along one elevation. An extra challenge for this job was the fact that the swimming pool had to be kept operational throughout the construction programme. 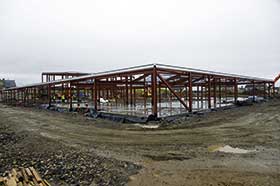 Furthest south on the Isle of South Uist is the remotest of the projects, Daliburgh Primary School. Designed as a simple single storey steel structure like the other primary schools, (including Balivanich Primary School on Benbecula) this project was the last to be included in the Western Isles Schools Project and will be open in time for the new academic year this coming August.

The new school is being erected immediately adjacent to the existing school which will remain fully operational throughout the construction period.

Commenting on the project when the steel frame was completed last October, Gemma Gordon, Associate Director with Scottish Futures Trust said: “When complete, this will truly be a school for the future as it has been designed with flexibility at its core making it easier for the school to adapt to meet future curriculum demands.”

Summing up the project as a whole, Mr Boyne says the reason the schools have all been successfully constructed was partly due to the fact that the steel design was kept as simple as possible and everything was tied up at an early stage. “In this way no changes were needed to the structural design which would have been a little more problematical than usual because of the locations.” 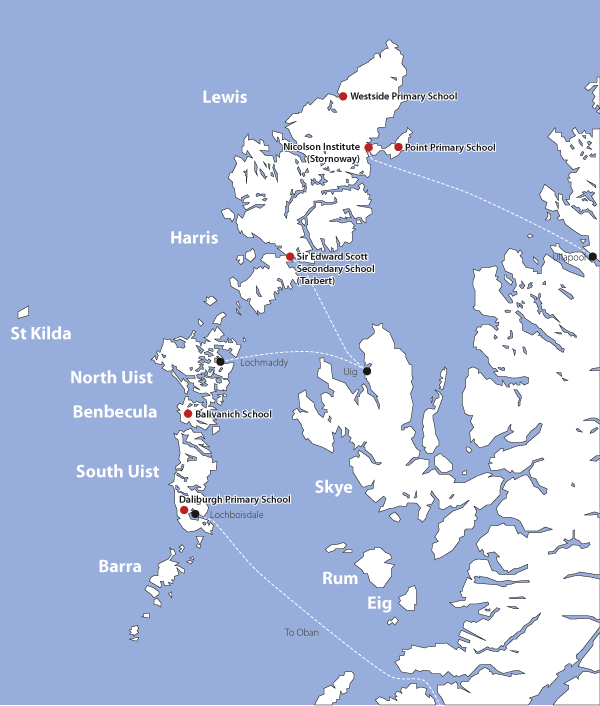 All of the project’s steel was initially transported by ferry from Walter Watson’s plant in Northern Ireland to Troon on the west coast of Scotland and then by road to Kilmarnock. Here the loads were sorted and dispatched in 25t loads – nothing bigger would be transportable on the Isles’ road network – to one of three ports, depending on the final destination.

“Scheduling was very important, and each load was ready in Kilmarnock at least three days before it was needed on site,” explains Trevor Irvine General Manager Structural Division for Walter Watson. “We needed to make sure enough steel was arriving on each site and in the correct order, especially as windy conditions can result in ferry services being cancelled at short notice.”

From Kilmarnock deliveries- using a local Hebridean haulier – were transported to Ullapool for the three projects on the Isle of Lewis, Uig on the Isle of Skye for the Sir Edward Scott School on Harris, and the port of Oban for jobs on Benbecula and South Uist.