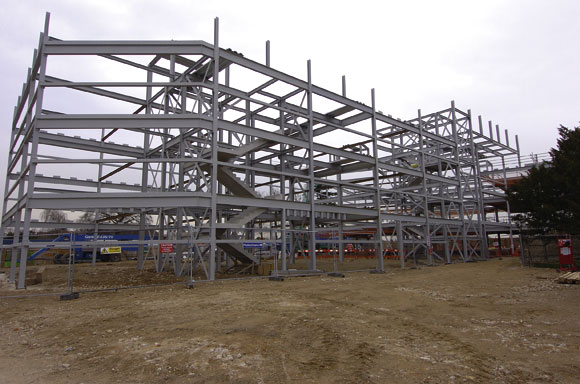 Main client: NW Kent College
Architect: BAM Design/KSS
Main contractor: BAM Construction
Structural engineer: BAM Design/AKT
Steelwork contractor: Robinson
Steel tonnage: 630t
One of the most buoyant sectors for construction of late has been education, with a raft of new and refurbished schools and colleges going up across the country. An example of this is the work currently being undertaken by BAM Construction for North West Kent College in Dartford.

Two new buildings are being constructed at the college’s Dartford campus, one a dedicated teaching block, and the other a mixed-use structure containing a sports hall and classrooms.

One, if not both, of the buildings are visible from the adjacent A2, and so highlight and symbolise the regeneration of this part of Kent. The modern teaching block replaces an old structure which was demolished last year, while the other building is set to provide the best facilities possible for the on-campus School of Sports and Public Services. This is apt because the nucleus of the Dartford campus was originally the pioneering PE College founded by Madam Osterberg where she invented the game of netball. 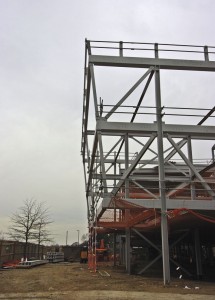 The feature cantilever façade of Block B

College Principal Malcolm Bell, agrees and adds, the college was delighted to receive the initial go-ahead for the project which forms an important element in this part of the Thames Gateway regeneration scheme.

Construction work began last November, when BAM began installing pad foundations in preparation for the steel frames to be erected. Two old buildings had previously been demolished as part of another contract so the ground had already been cleared.

Specialist ground treatment works including microgravity surveys and Dutch Cone Penetration Testing were carried out to discover whether there are any subterranean anomalies present in the chalk strata, as historical chalk mine workings (Deneholes) has previously been identified in the vicinity. In addition pressure grouting was undertaken at targeted locations and at each pad foundation position.

“No deneholes were discovered, but some underground voids were located, and these had to be grouted before the foundation work could begin,” explains Mick Kelly, BAM Project Manager.

Both new blocks are steel-framed structures, based around an economical design and regular grid pattern. The dedicated teaching block (known as Block B) is an L-shaped building with step – roughly halfway along – which takes the structure from two levels to its maximum height of three levels. 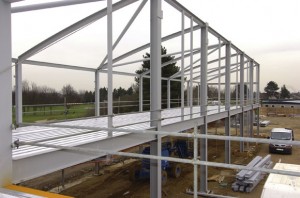 The other structure (known as Block S) is predominantly based around an 11m x 6.5m grid and has two levels which surround a central sports hall. The second level features a significant void, accommodating a large amount of suspended services. For stability, both steel frames feature cross bracing, situated in partition walls and along some elevations. In fact BAM Design designed out the originally proposed concrete cores resulting in significant savings.

According to BAM Design steel was chosen for a number of reasons: economics, speed of construction and the fact that Termodeck hollow core precast slabs were specified and these ordinarily require a steel frame construction method. Furthermore, the structural screed was omitted while maintaining diaphragm action at each floor level bringing further economies to the design.

The main steelwork feature of the project is the central multi-purpose sports hall in the middle of of Block S. This area is formed by a series of 32m long steel trusses which are delivered to site in two sections, one 19m long and the other 13m long. Steelwork contractor Robinson is welding the trusses together on site before lifting the completed sections into place. 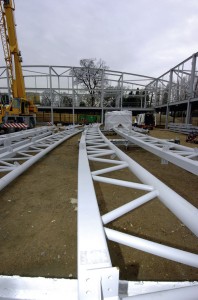 A welded connection is considered to be more aesthetically pleasing than a bolted one, as the trusses will remain exposed internally as architectural features. The trusses are formed by  CHS sections for the bottom boom and internal members, while the top boom is a SHS member. The trusses are curved and mirror the curvature of the block’s roof, and this was considered easier to achieve with SHS members for the top boom.

Surrounding the sports hall Block S features an outdoor plant area along one first floor elevation. The rest of the first floor and the ground floor level consist entirely of classrooms.

As part of BAM’s contract another building, located between the two new build structures, is being renovated. This former indoor swimming pool is being converted into a new drama studio and teaching area.

The two new buildings are due to be completed during May/June 2011 and then fitted out by the college in readiness for the Autumn term.