Royal opening for The Kelpies 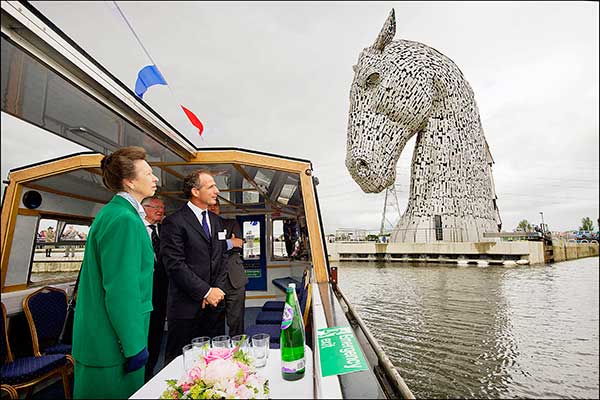 The Kelpies have received a royal seal of approval as Her Royal Highness Princess Anne has officially opened the world’s largest pair of equine sculptures and the new canal extension over which they stand guard.

HRH the Princess Royal led a flotilla of around 40 boats along the Forth & Clyde Canal to the sculptures, before meeting some of the groups and individuals involved in the project.

The colossal Kelpies, which tower over a new section of the historic Forth & Clyde Canal, are the centrepieces of the £43M Helix project.

The scheme, driven by a partnership of Falkirk Council and Scottish Canals and supported by an award of £25M from the Big Lottery Fund, has transformed 350 hectares of underused land between Falkirk and Grangemouth into a vibrant parkland, visitor attraction and marine hub with the canal and The Kelpies at its heart.

More than one million visitors from all over the world have stood in the shadow of the sculptures since their unveiling in April 2014, bringing renewed vibrancy and income to the area and boosting the local economy by an estimated £1.5m per year.

Councillor Adrian Mahoney, Falkirk Council’s spokesperson for Culture, Leisure and Tourism, said: “It seems particularly appropriate that Princess Anne – with her love of horses – has agreed to officially open the Kelpies, the world’s largest equine sculptures. Standing at around 30m tall, they dominate the skyline and act as a beacon to tourists from all over the world.”

The complex steelwork for The Kelpies was fabricated, supplied and erected by S H Structures.

The project was recognised by the Structural Steel Design Awards in 2014 as a unique and iconic artwork, and was honoured with an Award.