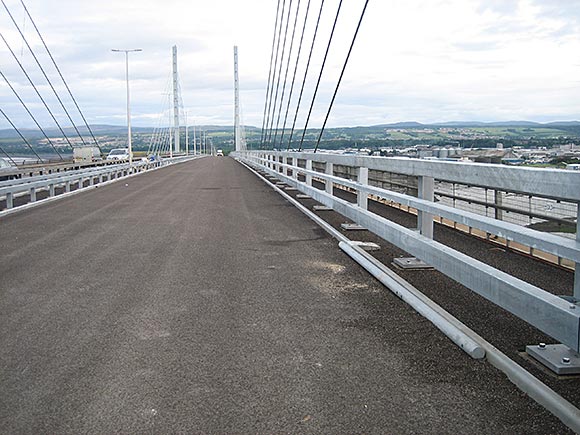 Two bridge projects in Scotland highlight the safety performance and ease of installation of the Tata Steel vehicle restraint systems.

Thousands of miles of Tata Steel safety barriers have been installed on the UK’s highways and bridges during the last 50 years.

The company has an established reputation within the industry for producing a comprehensive, economic and high performance range of traditional vehicle restraint systems.

Tata Steel’s range consists of a number of barrier system designs including high and normal impact options. Both of these options are being installed on the Erskine and Kessock bridges.

Spanning the River Clyde, the 1321m-long Erskine Bridge is a cable stayed steel box girder structure opened in 1971. It connects the M898 motorway in Renfrewshire on the south side of the river to the A82 in West Dunbartonshire on the northern shore. 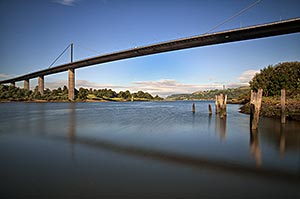 Flint & Neill, the structural engineers responsible for the design of the barrier replacement scheme, identified a high risk of an HGV impact with either the support cables or towers, which could potentially cause a collapse. They suggested installing a new HGV containment barrier system.

The Tata Steel 365 barrier system was selected after it was demonstrated that it would fit the requirements of the project.

“The requirement was for barriers with posts at 4.3m centres to allow them to fit onto strong points on the bridge’s superstructure and so reduce bridge strengthening work,” says Trevor Mustard, Tata Steel Manager, Customer Technical Services & New Product Development, Structural Tubes. “This is something our system could easily accommodate.”

During the first half of 2011 Tata Steel designed the barriers and then prepared materials for full scale impact testing.

“We carried out the barrier impact testing in July 2011 with complete success”. says Mr Mustard. The barriers met the specification requirements at Erskine and hence were chosen as the preferred installation.

A further area of risk was also identified and this required the verge barriers on Erskine Bridge to be replaced with 30t HGV (H4a) barrier.

In total Tata Steel is supplying approximately 5,300m of high impact barriers for the project, installed between October 2013 and May 2014. To produce the barriers more than 500t of Tata Steel Celsius tubular steel needed to be sourced from mills at Corby and Hartlepool along with 345t of base and deck plates from Scunthorpe.

Carrying the A9 over the Beauly Firth north of Inverness, the Kessock Bridge is another important transport link in Scotland. 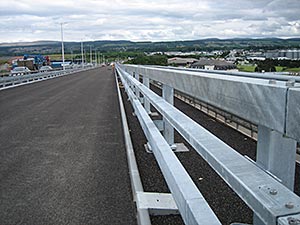 Tata Steel’s systems are renowned for their high performance

Opened in 1982, the 1,056m long cable stayed bridge has an orthotropic steel deck incorporating a main span of 240m.

Mouchel, the designer for the scheme, had identified similar risks as on Erskine, requiring a quantity of the H4a barriers to protect cables and towers.

“There was a problem with a lack of space for central reserve barriers, however a version of our high performance Protect 365 N2 system met the specification requirements,” says Mr Mustard. “Their requirement became 2,100m of N2 barrier and 2,100m of H4a barrier, similar to Erskine, but with 4m post centres.”

The barrier installation programme was eventually combined with a complete refurbishment of the bridge that also included resurfacing, deck joint replacement and new lighting.

The Kessock Bridge contract includes approximately 110t of Celsius tubular steel from Corby and a further 190t of Celsius from Hartlepool along with 60t of base plates from Scunthorpe. 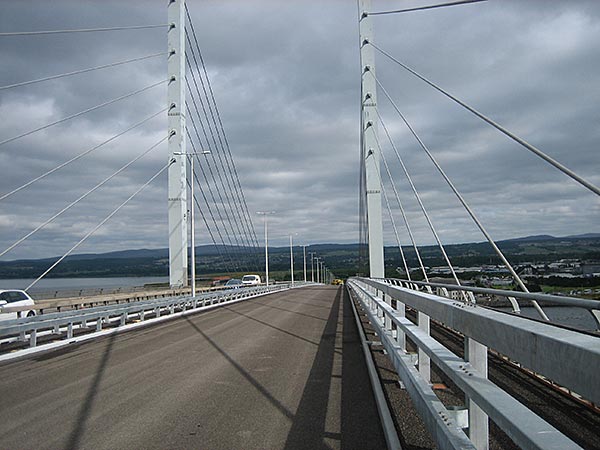 Research tests ensure the barriers can perform to all modern scenarios

All Tata Steel highway products offer lifetime value and have been developed to perform with modern day vehicles and scenarios. Rigorous research and development ensures that every aspect of the systems design is extensively tested to meet or exceed the latest industry standards. In depth product testing undertaken by MIRA has proven that all Tata highways products are engineered to withstand a gruelling range of impact testing.

All tests are carried out with cars less than five years old. The company’s computer modelling and subsequent dynamic tests showed that cars with modern rigid passenger cell designs require the barrier system to have more energy adsorption than older vehicles. This is where Tata Steel’s rectangular hollow section steel parapet restraint system is said to really come into its own. The steel provides a uniform and repeatable high impact resistance and affords excellent ductility. This is claimed to ensure post and rail sections yield optimum performance to give the systems a high energy absorption performance and maximum occupant protection.

By absorbing energy in a controlled way, Tata says its barrier systems not only reduce the level of injuries in crashes but also reduce anchorage forces acting on the bridge structure.

With increased vehicle speed, together with volume and weight on UK roads, the company recognises the importance on passive safety performance and developed an industry leading product that has undergone extensive testing and development for the UK’s roads and bridges.