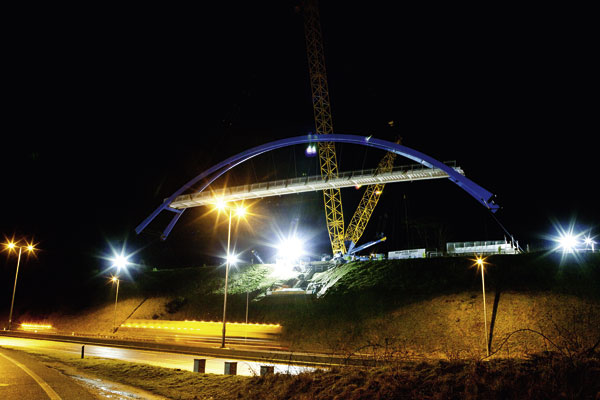 The first bridge on the UK road network to be designed and constructed to the new Eurocode design standards, which are currently being introduced across the EU, has been lifted into place across the M5 in Devon.

The fully assembled 90m-long main span of the bridge required the UK’s largest mobile crane to lift it into place during a night time motorway possession.

Working on behalf of main contractor Carillion, Rowecord Engineering fabricated the bridge and brought it to site in large sub-assemblies, the largest of which was 35m long × 6m wide.

The main span was then fully assembled on temporary trestles positioned adjacent to the bridge’s final position. Weighing approximately 230t, the structure was fully welded, painted and had cables and its anti-skid deck installed prior to being lifted into place.

The lift took approximately 1.5hrs to complete, and the following weekend Rowecord repeated the procedure and installed the smaller and fully assembled end spans of the bridge.

Known as the Redhayes bridge, it will provide both pedestrian and cycle routes across the M5, near Exeter.

Dr Steve Denton, Director of Engineering at Parsons Brinkerhoff said: “The lifts have gone very smoothly and we are absolutely delighted with the result. It will be an iconic landmark for Exeter, marking the gateway to the city as well as being an important step forward for infrastructure as Eurocode design standards were employed.”