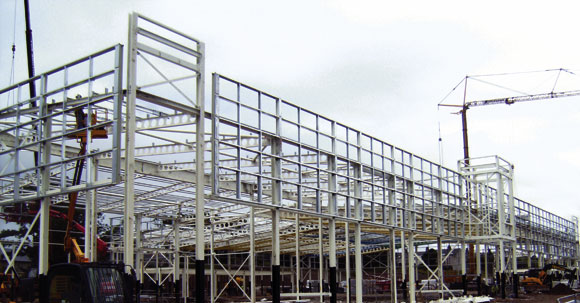 Each column throughout the project rests on at least three piles.

A new retail complex, on the site of an old amusement park, forms one of the initial phases of Morecambe seafront’s regeneration.

Most residents and visitors to Morecambe will agree that the Lancashire seaside resort has seen better days. It’s a long time since the pre-war heyday and today the town’s promenade and surrounding environs show distinct signs of wear and tear as the once full lodging houses and tearooms are under used.

The problems facing Morecambe are by no means unique, as the advent in the 1970s of cheap overseas holidays affected all of the UK’s traditional holiday destinations.

However, in the last couple of years the local authority has begun a large regeneration scheme aimed at bringing new life into the seafront area of the town. Running in conjunction with this plan is a project on the large site once occupied by Morecambe’s famous Frontierland amusement park. 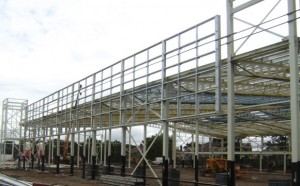 Prior to erecting the structures a large earthmoving project was undertaken, this required 600,000m3 of overburden to be excavated.

This plot of land on Central Drive, adjacent to the Morecambe railway station, is now partly owned by Morrisons Supermarkets and the company initially opened a large supermarket on the site in the early 1990s. Since then the amusement park has closed and Morrisons acquired a much larger piece of the land.

The supermarket covers approximately half of the company’s current site and the remainder is now being built on to form the Morrisons Retail Outlet. This will comprise three large superstore units which have already been leased to three leading retailers.

Known as Units A, B and C, the former is a stand-alone store leased to JJB Sports, while Units B and C are conjoined and will be occupied by Homebase and Next respectively.

All of the structures are steel-framed buildings standing on deep piled foundations. Adrian Veitch, Construction Manager for main contractor Ham Construction, explains that the site’s substrata is very unpredictable. “Once the fairground was demolished the site was surveyed and we discovered that in many areas there is sand up to 6m deep above a layer of clay, this meant piled foundations were needed.”

However, prior to any piling work the previously sloping site had to be levelled and this involved a huge earthmoving operation which was conducted towards the end of 2006.

“The piling is very irregular as the sand varies in depth,” adds Mr Veitch. “The survey indicated that some 12m deep piles would be needed for the entrance area of Unit A, while areas of Units B and C required mostly 6m deep piles.”

Baxter Ireland, BSCP Director, says the project has been designed around the retail client’s requirements, which predominantly revolves around open column-free areas. 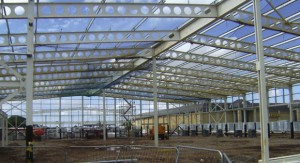 “Each unit has a bespoke design for the tenant,” he adds. “Although we very much have a traditional retail scheme the design incorporates a stick and beam construction with cellform members instead of a portal frame.”

Mr Ireland adds that a portal frame design was looked at for the entire project but wasn’t used as the tenants wanted flush walls.

“They wanted flush walls internally and externally, for their feature cladding, so we reduced the column sizes to 203 sections and this meant a stick and beam approach.”

Unit A is very nearly a 50m x 50m square in plan and will also feature a mezzanine floor within its 15m maximum height.

“As it is all stick and rafter construction, the steelwork has gone up quickly and proven to be very economical ,” comments Jaime Greenock, Project Manager for Bone Steel. “Morrisons, who we have done a lot of work for, prefers the speed of construction you get with steel.”

Bone commenced steel erection in June and Unit A was the first part of the project. Mr Greenock says the biggest challenge was the fact that all lifting had to be done from outside of this building.

“On the ground floor Ham had already excavated a large pit which will eventually be turned into a swimming pool and we had to erect the  steelwork around it,” he says. “This meant using a larger capacity mobile than we’d ordinarily use, so we could get the required reach.”

Above the ground floor and swimming pool Bone has erected a mezzanine level which covers the entire structure’s footprint. Above this a haunched roof was erected with 15m high valley columns and 25m wide spans either side. The roof was formed with 762 x 210 x 92UB members together with CHS sections for a feature overhang which goes around all four sides of the building.

“There were some dynamic loading issues for Unit A’s first floor as it will incorporate a dance studio,” says Mr Ireland. “But this wasn’t difficult to incorporate into the overall steel design.”

Once Unit A was erected, Bone simultaneously constructed Units B and C during July. These two connected structures each measure (B) 50m x 45m  and 38m x 25m (C) respectively.

“The two units are basically one large portal frame structure with a dividing wall,” explains Mr Greenock. “The client wanted large column free spaces for these superstores, so each building has large spans with single columns down a central valley line.

“Unit B slightly varies as it contains a small mezzanine which covers approximately 200m2 in one corner,” sums up Mr Greenock.

The Morrisons Retail Outlet is scheduled to open at the end of the year.