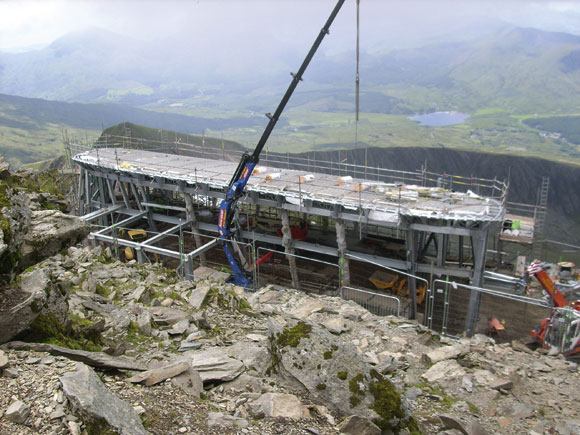 One Hiab crane was brought to site in sections, assembled on the summit and then helped erect roof decking.

Building a new visitor centre on the summit of Mount Snowdon presented a number of unique challenges, not least how to get all the materials to site. Martin Cooper reports on the UK’s highest construction site. 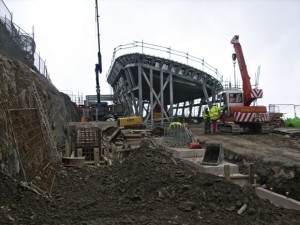 As the structure was erected the site became progressively more confined.

Occasional dense fog, intermittent low cloud and winds that can regularly reach speeds of 80mph are just some of the conditions that had to be overcome by the team building the new Mount Snowdon Visitor Centre.

And, aside from the unpredictable weather, the contractors were also faced with the logistical problem of how to get materials to a construction site 1,065m above sea level.

“Working on the highest point in England and Wales was an immense challenge,” stresses Andrew Roberts, EvadX Project Manager. “Getting all of the materials, plant and personnel to the summit was certainly a unique challenge.”

Conveniently Snowdon has a mountain railway which winds its way to the summit and this provided the contractors with a viable transport route to the top. All of the steelwork was bundled into 14m-long packages so it would fit onto the train’s flat bed carriage.

“The project’s construction team has been pro- vided with its own train which has to operate around the regular tourist service and nearly everything went up by this route,” explains Mr Roberts. “How- ever, equipment such as excavators, that were too big for the train were driven to the top along a stony track, which took the best part of a day.”

Once materials were on-site the construction team were very much at the mercy of the elements. “It can be a bright sunny day at the bottom, but windy and raining at the summit,” says Mr Roberts. “The weather is extremely changeable, even in the middle of summer.” 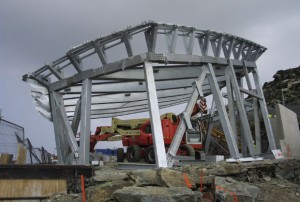 The ends of the building are curved and feature cranked columns.

The wind has also played a major role in the project, as the train service is halted when wind speeds exceed 40mph, and on the occasions this happened all work had to be cancelled for the day.

“We had some close calls, but luckily the train service wasn’t halted while our workers were still on the summit,” says Mr Roberts.

Work on the project effectively began with the demolition of an existing Snowdon visitor centre and this took place in 2006. Once the ground was cleared the concrete foundations were also installed to allow EvadX to begin its steel erection programme last April.

“When we started erecting the steelwork it was like summer, but we’ve since had all weather conditions,” adds Mr Roberts. “Taking that into consideration, we still erected the entire steel frame in just over two months.”

The finished Visitor Centre will consist of a large cafe with washrooms and information area, medical facilities and an emergency overnight shelter. Attached to the centre there will be a 60m-long steel framed lean-to structure which will house a new platform for the railway, plant rooms and staff accommodation. 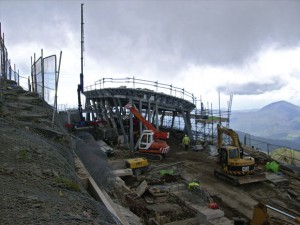 The construction team experienced all weather conditions, sometimes all in a single day.

EvadX used two cherrypickers for the erection and one 8t capacity mini mobile crane. The cherrypickers were fortunately just small enough to squeeze onto the train’s flat bed trailer, while the crane was specially sourced as the largest crane available which could be transported by rail to the summit.

Four columns at the front and back all slope out at 13- degrees, while the curved ends of the structure feature column members which slope inwards and outwards. To achieve the sloping roof the back columns are 5.5m high, while those at the front are only 3m.

These columns are all stainless steel CHS sections and Mr Roberts says they are ‘architectural features’ and will be visible from inside the finished building. The columns will also be incorporated into large glazed areas which will allow tourists to see right through the building. 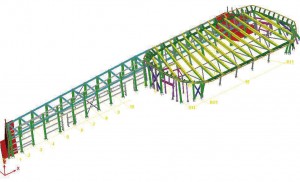 Steelwork skeleton of the Visitor Centre and the platform lean-to structure.

Consequently the columns are predominantly 254 x 254 x 73 UC sections at 3m centres, while at the corners, where the columns change sloping directions, there are double 250 x 250 SHS sections.

Mr Bowen also says the building will incorporate a granite clad roof which had to take snowdrift loading into account. The roof of the building is ultimately supported by a series of tapered plate girders each weighing approximately two tonnes.

In order to erect the complex shape, on what is a very confined site, EvadX initially constructed one square section. “We then proppped it up and using this as a support we then erected one curved end around this. Once this was up we were able to take the temporary props down and erect the rest of the structure,” explains Mr Roberts.

All connections are spliced and bolted which helped make the erection easier. “Welding would have been a difficult procedure as the weather was very bad at times,” says Mr Roberts.

Some additional welding of members was done at the Corus workshop during the trial erection. This included 154 brackets which are attached to the roof perimeter and hold granite roof sections in place. The brackets fit to a 300mm x 300mm box section which effectively holds the structure together at eaves level. 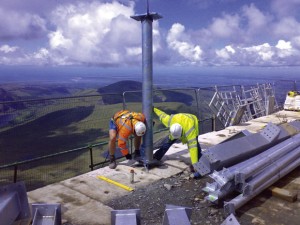 The first column was erected on a sunny day in April.

Now that steel erection has been completed, main contractor Carillion has begun cladding the structure in predominantly locally-sourced granite. The aim is to seal the structure before the winter sets in. The Visitor Centre is scheduled to open during the Summer of  2008.