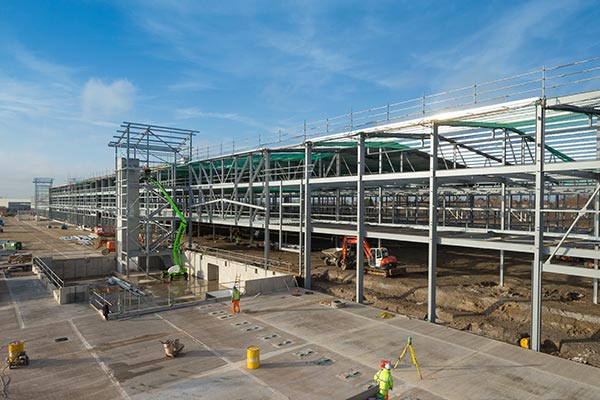 One of the UK’s fastest growing parcel firms is constructing a new £100M facility in the East Midlands.

Due to ever increasing demand for its services, UK and International parcel delivery provider DPD UK is building its fourth and largest hub in the United Kingdom.

The company currently has three large main parcel sortation hubs at Smethwick and Oldbury in the West Midlands, locations that are conveniently located in the centre of the country with easy access to the M6 motorway.

The new facility at Hinckley also has good motorway access and should be fully operational by 2015. It will create up to 1,000 jobs, increasing DPD’s overnight parcel sorting capacity by as much as 65%. 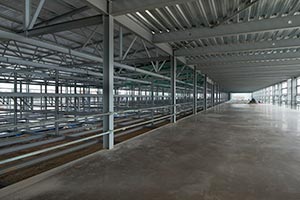 The office mezzanine is formed with metal decking 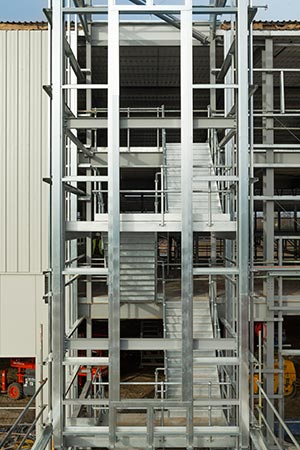 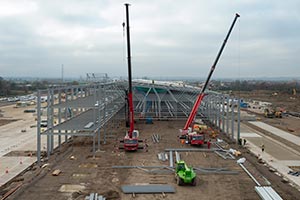 The structure is huge and measures 480m long × 40m wide. Internally it has a 30m wide clear span, formed by a series of tapered lattice trusses that have a maximum depth of 5m. The trusses are important, not just forming the roof, but also supporting a steel grillage that will in turn support the hub’s conveyor system.

In most similar installations the conveyor would be supported off the ground floor slab by an extensive system of support frames provided by the conveyor supplier. This format significantly reduces the clear circulation routes and operating efficiency of a facility.

“To avoid this the client required us to design the building frame to support the conveyors without the need for internal supports. It is believed that the company’s Hub 3 and this new Hub 4 are the only such facilities in Europe to be designed in this manner,” says Neil Darroch, Cameron Darroch Associates Project Engineer.

“In effect the client has paid an initial premium for the building to maximise long term operational efficiencies. Steel was the only feasible option to allow us to meet the client’s brief.”

The structural steel frame of the hub is based around 72 × 6.35m wide bays, with each bay large enough to accommodate four loading doors – two on each side of the building. Stability is derived from the portal action within the trusses and bracing located in some bays.

The steel grillage hung from the trusses is not based on the standard grid pattern. These columns are mostly set off grid and were all designed with the conveyor system in mind.

“The steelwork can’t interfere with the building’s all important conveyors or any internal traffic movements,” explains Mr Darroch. “Consequently the hanging columns are all set at various points so as not to clash with any of the sortation plant.”

Aside from the main sorting area of the hub, the remainder of the structure’s width is formed by a series of 10m long rafters that share a row of internal columns for support. The rafters support the roof over a two-storey office mezzanine that extends throughout the 305m long central portion of the hub, while either side of this shallower lattice girders support single-storey timber decked mezzanine floors required for the parcel in-feed areas.

“Because of the overall length, we divided the building into four phases for our erection programme,” says Bob Aitman, Caunton’s Erection Manager. “Using two mobile cranes we erected two trusses and their columns, then in-filled the hanging steelwork and then installed the connecting rafters and mezzanine sections. We would then repeat this format until each phase was completed.”

Apart from the trusses, which arrived on-site in two pieces, all of the steelwork for this project was immediately ready for erection once it was delivered.

By working its way systematically down the structure, Caunton was able to leave a completed frame ready for follow-on trades to get started as quickly as possible.

The latest DPD UK hub at Hinckley forms part of a new business park being developed by Goodman. As well as the main building, the hub also consists of four other structures, all of which are formed with steelwork.

A four-storey gatehouse, with a footprint of 20m x 37m, is the largest of these structures. Constructed around a standard beam and column grid the building will accommodate three floors for security, offices, a canteen and staff welfare facilities, with the top level used for plant equipment.

The other on-site structures consist of a portal framed vehicle maintenance unit with attached offices, a garage/tyre store and salt barn building, and a vehicle jet washing facility.