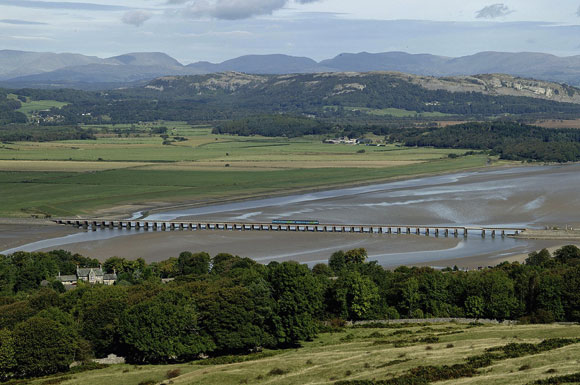 The historic Arnside Viaduct has reopened to regular rail services after having its entire 476m-long deck replaced with new steel spans.

After a 16 week closure, Cumbria’s Arnside Viaduct reopened during July having had its entire bridge deck removed and replaced with new steel sections and twin continuous welded rail tracks.

Train journeys across the viaduct are now smoother and quieter and the 30 mph speed limit, previously in place because of the deteriorating state of the original ironwork, will soon be doubled to 60 mph after a settling in period.

The 51 span structure was originally built in 1856 and carries the double-tracked Carnforth to Whitehaven railway line over the River Kent estuary, close to Morecambe Bay. The structure has suffered considerable deterioration over the years, resulting in the bridge’s load capacity being reduced; the completed works will mean there will be less need for maintenance, improving journey times for both passengers and freight users. 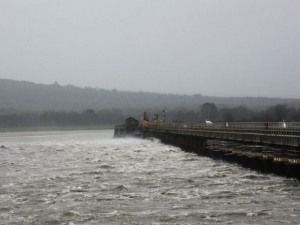 All of the substructure was fully surveyed at an early stage in the construction programme and deemed to be in good condition, so only the deck needed to be replaced. “The client wanted a robust bridge deck and one which would exert comparable loads to the original deck, as we were re-using the piers,” explains Gifford Project Engineer Fabio Gazzola. “Having fully value engineered the project, a steel structure was the only option.”

The construction programme for the project, led by main contractor May Gurney, has had to be extremely coordinated, with all subcontractors keyed into the critical process.

In order to complete the job in the specified bridge closure window, the deck was removed and installed in two operations; Down line first and Up line secondly. This resulted in a total of 102 Victorian decks being removed and 102 new steel decks being installed.

Road rail vehicles (RRVs) were used to remove the Down line while positioned on the Up line. The RRVs were also used to place the new steel walkway which acted as the running beam for the gantry crane. 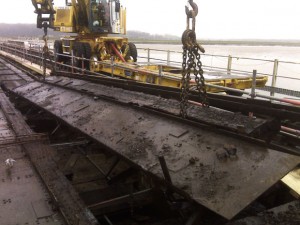 Both banks of the estuary were used for the construction process, with the main project offices and plant area at Arnside. This side of the viaduct was also used for storage and then delivery of the new deck materials, while the opposite Grange-over-Sands side of the River Kent was used for the receiving of the old deck sections.

The new decks were designed by Gifford. They provide full loading capacity and restore the viaduct’s full line speed. Derailment containment is provided by upstands while steel stools at nominal 600mm centres support the rails.

“When designing the bridge we had to take into account the chance of a tidal surge sweeping over the structure,” explains Dr Gazzola. “The probability of such an event is one in one hundred years. Steel holding down plates were provided at each pier to limit the bridge deck units upward movement to a maximum of 5mm, in the event of the hydraulic uplift exceeding their self weight.”

Steelwork contractor Mabey Bridge fabricated all of the bridge decks at its Chepstow factory and transported each fully assembled and fully welded bespoke span to site individually and as required for installation. Each of the bridge’s 51 spans are of a slightly different length, varying by up to 200mm, although each one is roughly 8.5m long between bearings; typical weight is 24t.

Span five is longer as it was designed to accommodate a drawbridge which was never installed. It is longer at 16.5m and because of this it needed special measures to be put into place which deviated from the regular construction sequence. In particular, one side of the centre beam top flange had to be removed to allow the Down side deck to be fitted alongside, while it supported the Up line. 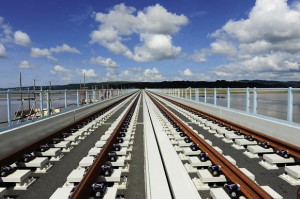 Span two, nearest the Arnside bank, is also slightly larger than the rest, at 11.7m long, between bearings. Why this span is different know one really knows, although it has been suggested it could have been a navigation span for small vessels.

Prior to the installation of the new steel decks, Mabey had to install the bridge’s walkway sections, which consist of prefabricated box sections. These bespoke pieces – two for each span section – had to be partially installed as they had to support the gantry crane’s rails.

Once the deck was fully installed and the gantry crane dismantled, the remainder of the bridge’s walkway was installed. This basically involved in-filling between the outer walkway section –  which supported the gantry – and the main bridge deck.

“The most onerous design requirement for the walkways was actually in the temporary condition,” says Dr Gazzola. “This was because they acted as runways for the erection gantry.”

Summing up the project, Steve Richardson, May Gurney Rail Services Project Manager says: “The list of challenges was long and varied on this project. But through careful planning and precise execution we were able to make it work. Teamwork from client down to sub-contractor was the key to the success of this project.” 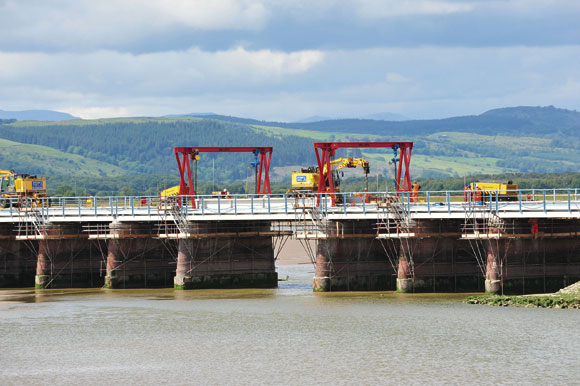