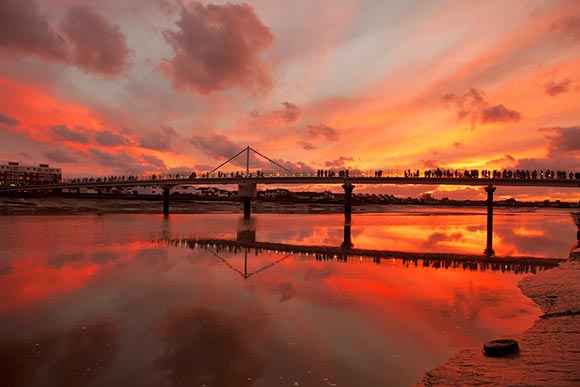 Shoreham has a new river crossing, a pivoting steel structure that will keep foot, cycle and waterborne traffic moving.

Local journeys by pedestrians and cyclists in Shoreham-by-Sea have become significantly more enjoyable since the opening of a new swing bridge across the River Adur.

Known as the Adur Ferry Bridge, it forms a vital component of the Sustrans National Cycle Network Route 2, which will eventually connect communities along the south coast from Dover to Cornwall. The project, commissioned by West Sussex County Council in partnership with Adur District Council, also received a £770,000 grant from Sustrans and the Big Lottery Fund.

Replacing an old narrow drawbridge built in the 1920s, the new pedestrian and cycle crossing provides a better and more direct link between Shoreham Beach, the town centre and the railway station. 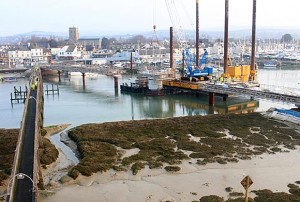 During construction of the new bridge, the old crossing (left) was used for access and transporting materials across the river 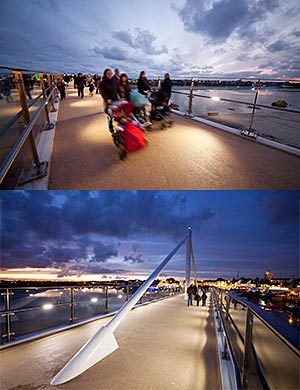 The bridge deck is between 4m and 6m wide throughout its 214m length, which is considerably wider than the old bridge, therefore providing more space for cyclists and walkers alike.

Another highlight and benefit of the bridge is that both sides are enclosed by 1.6m-tall glass parapets, supported by stainless steel posts, this allows users to have unobstructed views across the river.

The most striking element of the structure is a pivoting 50m long central span that allows boats to pass up and down the river.

“Having a moveable span to keep the river open to vessels was one of the main design criteria,” explains Alan Monnickendam, Cass Hayward Project Engineer. “The old bridge had a moving span and this needed to be retained in the new bridge as there is an Act of Parliament preserving the river’s use.”

The entire span pivots via a mechanism housed within a central pier. Operated fully automatically, either from an operations room on the south shore or via a hand held device, the span is able to pivot once horizontal pins are released and retracted into the nose of the swing span. It opens, in just three minutes, to a final position that is 70 degrees to the main structure.

As well as having a navigable central channel, this part of the River Adur experiences an extremely high tidal range, greater than seven metres at times. This had an impact on the works and meant some of the installation of bridge sections had to be coordinated around high tide.

The bridge has seven spans in total, three on either side of the large 50m long central portion. Initially steelwork contractor Mabey Bridge installed the three spans forming the southern approach, the last of which (closest to the centre) was erected using a 110t crawler crane mounted on a barge.

“Main contractor Osborne had constructed a temporary causeway out into the river as a working platform for a crawler crane and allowed us to erect the first two spans,” said Chris Reynolds, Mabey Bridge Senior Site Manager. “The third span had to be installed using a barge as this part of the river was too deep to construct a temporary causeway.”

A similar method was used for the northern approach, with the first span erected by a 100t capacity telescopic crawler crane using a temporary causeway constructed into the river, and two spans installed using the same barge mounted crane.

One pair of 26m long braced girders, weighing 17t, form each of the six approach spans. These were fully assembled and painted at Mabey Bridge’s facility before being delivered to site. 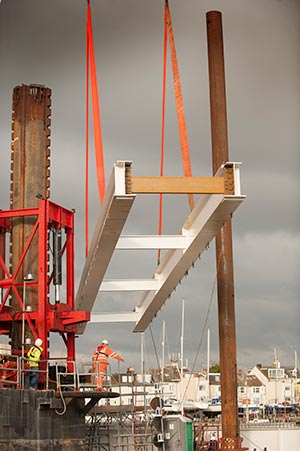 One of the bridge spans is lifted into place

When working from the temporary causeways steelwork was delivered direct to the crane by road. However, for the central spans, braced girders had to be floated up stream and delivered by a flatbed barge, a job that was high tide dependent.

Finally, with the approaches erected and the pivoting mechanism installed, the central moving span was lifted into place.

A large jack-up barge carrying a 180t capacity crane was floated into position and anchored to the riverbed for this final piece of the steelwork programme. Getting the steelwork to the crane was again reliant on barges that could only reach the bridge site during high tide.

Mabey Bridge delivered the girders for the central span to a holding yard at nearby Shoreham Docks. This was where the nine sections were welded into three sections, two outer 19m long pieces weighing 24t each and a central 12m long piece weighing 24t that fitted over the pivoting mechanism. Once assembled these sections were then lifted onto a barge, floated upstream and erected.

Prior to the main event, the central span complete with its 10m high mast and two stays was trial erected at the docks.

“The trial erection gave us peace of mind that everything would fit exactly. Once the steelwork was out in the river there was no room for error,” explains Paul Reader, Osborne Project Director.

Shoreham’s pedestrian and cycle bridge has already become a local landmark and an indispensable link since it was officially opened on 13 November by HRH The Duke of Gloucester.

“This has been an extremely complex project involving both land and marine based construction,” sums up Mr Reader. “All the team worked extremely hard to erect this important addition to the local landscape.” 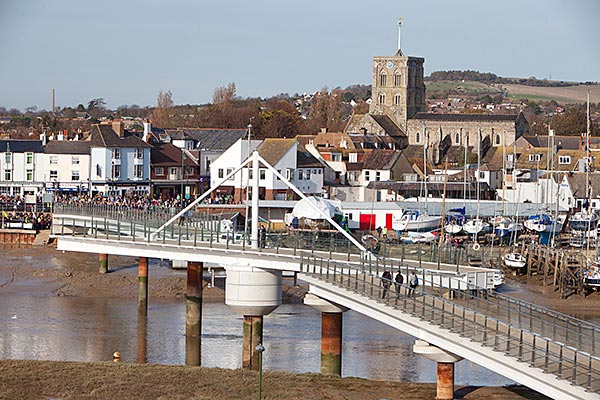 As well as including a moving span the bridge’s design brief required simplicity, buildability and cost effectiveness.

“The bridge needed to be as light as possible due to the moving element as well as easy to construct,” says Mr Monnickendam. “Bearing in mind the location and function, a steel design was the only viable option for this bridge.”

The structure is supported on seven piers founded on mono piled foundations. The central pier is the largest with a 4.5m diameter upper section that houses the pivoting mechanism.

The central pivoting span has a rigid stayed design with an 8m high CHS 508mm diameter mast supporting and connected to a pair of 273mm diameter 14.5m long CHS stays. This configuration gives the span rigidity and support during operation.