Reach for the sky

Heron Tower, the City of London’s tallest building has been widely praised for its emphasis on quality and sustainability. Martin Cooper revisits another high rise steel-framed success story.

The 46-storey steel and glass tower is 202m tall, with a mast adding a further 28m to its overall height, making it the highest building in the City.

Sustainability lies at the heart of the structure’s design, highlighted by the award of a BREEAM ‘Excellent’ rating. The building is working well, fulfilling high expectations, while tenants enjoy the ambient and light filled office spaces.

More than 3,000m² of photovoltaic cells on the south elevation generate renewable energy and create a solar shield. The use of clear glass maximises daylight to the office floors, reducing the need for artificial lighting and importantly saving on energy consumption. 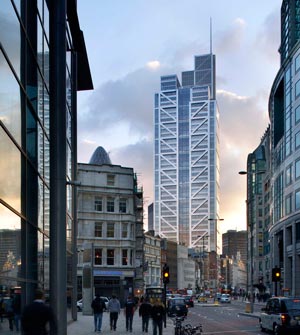 A landmark steel framed building in the City 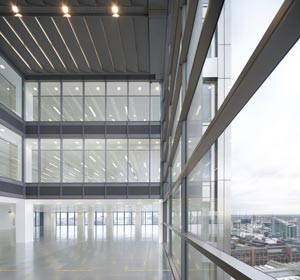 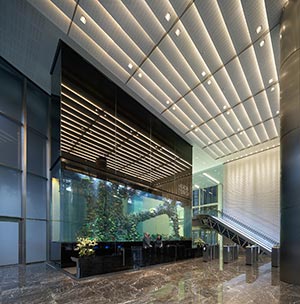 One of the UK’s largest aquariums dominates the main entrance 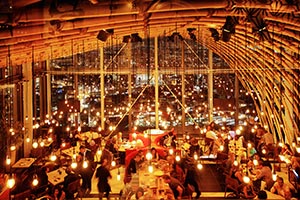 A unique and flexible architectural vision has come to fruition within Heron Tower whereby the building is based around a series of three-storey office villages, at the heart of which is a triple height atrium and entrance foyer.

On entering Heron Tower one of the first impressions is of the size and grandeur of the entrance foyer and of course the large aquarium that is 12m wide and 2m deep.

With a capacity of 70,000 litres and weighing more than 100t when full, this is the largest privately owned fish tank in Europe with 1,200 fish of 67 different species ranging from Green Chromis (60mm when fully grown) to Bamboo Sharks (which grow to a maximum size of 1.2m). The tank is cared for by two full time attendants and divers are needed to clean the rocks and windows twice a week.

Central to Heron Tower’s structural design are the three-storey office villages or atria that begin above the building’s entrance lobby and extend up to the 36th floor. Below the lobby there are three basement levels, adding to the structure’s three-floor symmetry.

More offices are located on level 37, while floors 38, 39 and 40 accommodate Sushisamba and the Duck & Waffle restaurants. The former establishment has the highest outdoor dining terrace in Europe, while the latter, situated on level 40, is officially the highest restaurant in the UK. Above this, the tower’s six topmost floors accommodate plant areas.

In contrast to a typical monolithic appearance with a centre core, Heron Tower has an offset core along its southern elevation that creates a structure with clear and open floor plates.

By positioning the service core along the entire south face of the tower it also shields the offices from unwanted solar gain. In contrast, the village atria are lit by triple height windows along the Bishopsgate elevation allowing northern light to penetrate the workspaces.

Much of Heron Tower’s structural frame was prefabricated by Severfield-Watson at its Yorkshire facility and brought to site in erectable sections. Stability frame sections, weighing 18t each, were delivered to site on bespoke trailers fitted out specially to carry this unique steelwork. The single storey frame sections comprising of two columns and one 12m-long beam along the top, all fully welded, which form the perimeter for one and half structural bays. These sections arrived at site and were lifted straight off the trailers by tower crane and erected immediately.

“There was no site welding necessary and we reduced the amount of bolted connections, which meant a faster erection process,” explains Richard Tarren, Severfield-Watson Contracts Manager.

The tower’s steel framed offset core was erected with prefabricated sections. The core was formed with a number of fully welded T-shaped sections, each one floor high and weighing 16t. Again, with less on-site bolting and less steel members the core’s erection was easily able to keep pace with the rest of the structure.

“Prefabrication played a significant role in the construction programme,” sums up Skanska Project Manager Jonathan Inman. “We had a 189 week programme and the speed of the steel frame construction was vital. The decision to bring less steelwork pieces to site for erection by the utilisation of large prefabricated sections made the process quicker and significantly reduced our programme risk.”

Summing up, Peter Ferrari, Managing Director of Heron International says: “From the building’s exceptional location at the heart of the City, to the emphasis on quality and design, right through to the unique features such as the aquarium in the lobby and the high speed, fully glazed, double deck lift, Heron Tower is a truly special building.”