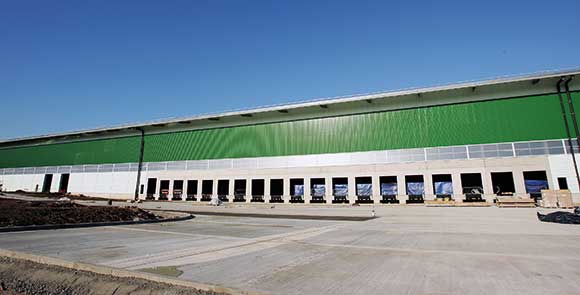 Optimum sustainability is being achieved with state of the art technology on the Blue Planet distribution centre in Staffordshire.

Situated on the outskirts of Newcastle-under-Lyme, Staffordshire, G. Park Blue Planet is a large distribution centre covering an area of 35,768m². Built on the land of a former colliery, the overall site is known as Chatterley Valley and this much larger site covers an area of  70 hectares which will be transformed over the next decade to create thousands of new jobs.

Nothing particularly unusual about that, however this is a pioneering project as sustainability has been placed at the forefront for the entire job. This is a truly carbon positive development and a number of cutting edge features have been incorporated into the design of the distribution centre.

Light enters the building using ETFE cushions in the roof which are inflated to allow wider spans than traditional glazing. The complex will have its own bio-mass micro power station, which will produce sufficient power and heat for the site, plus a surplus that will provide enough energy for up 650 local homes.

Other green sustainable features include thermally efficient buildings with air tightness and thermal insulation 25% better than current building regulations. Energy usage will be further reduced by making use of natural light, underfloor heating and a solar panel wall.

All materials for the project were picked for their sustainable credentials. A spokesman for main contractor McLaren, says Glulam frames were initially looked at, but they could not be purchased in the size needed so it was decided steel was the best solution because it is recyclable and has a 100-year lifespan.

Atlas Ward Structures was responsible for the design, fabrication and erection of nearly 2,000t of structural steelwork for this project. The job consists of a single portal framed warehouse and ancillary office accommodation, in total measuring 117,348m².

Sustainability is a key ingredient in the way Atlas Ward operates and fabricates steelwork.

“Our set-up, which includes modern and up-to-date fabrication machinery, means we can produce more steel per hour than before with less energy usage.”

All steelwork delivered to site has timber packing and Mr Barnes says this is all obtained from a sustainable source.

“Once the steelwork is unloaded most of our trucks return with packing timber which is continually recycled and never wasted.”

Summing up the project, Tom Haughey, Chief Executive Officer for Severfield-Rowen Group, said: “We were pleased to have been involved in such a high profile sustainable project as Blue Planet. We believe that sustainability is key to each subsidiary of our Group.” 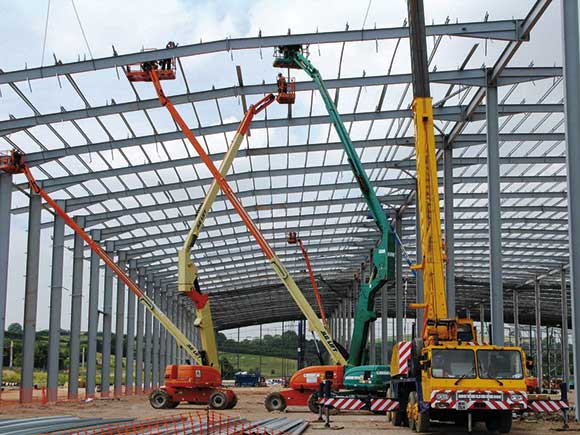