Posted on July 30, 2020 by NSC in Profile, Projects and Features, This month's featured stories 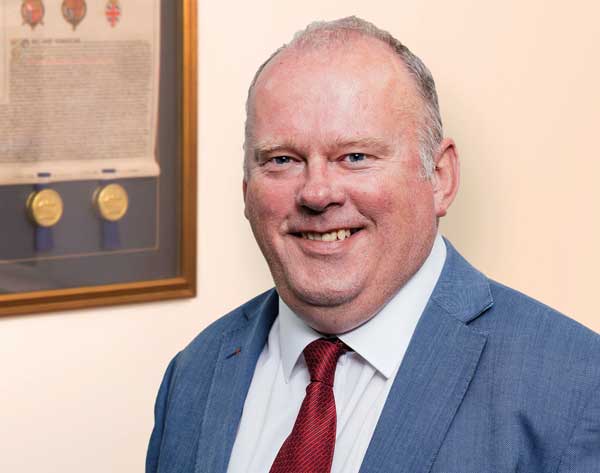 New BCSA President Mark Denham of Elland Steel Structures wants specifiers to demand that all structural steelwork tenderers are members of the Association as a minimum requirement. This is his ‘Big Hairy Audacious Goal’, as he explains to Nick Barrett.

* ‘Big Hairy Audacious Goal’ from ‘Good to Great’ by Jim Collins.Steelwork contracting involves collaboration between people with diverse skills, including metallurgy, structural engineering, design and welding, through to experts on safe erection of the most complex structures, but there can’t be many with backgrounds as research aerodynamicists in the aerospace industry.

BCSA’s new President Mark Denham might in fact be in a minority of one. Now Chairman and Managing Director of the successful, independent, Halifax-based steelwork contractor Elland Steel Structures, Mark was once part of the Computational Fluid Dynamics Group of the Aerodynamics Department at British Aerospace’s Sowerby Research Centre, Bristol.

Mark graduated in 1990 from Swansea University with a Honours Degree in Engineering Mathematics with Computational Methods, but his earliest career ambition was to fly aeroplanes with the Royal Air Force. Before University, he took part in the RAF’s Flying Scholarship Scheme, which earned him a Private Pilot’s Licence by the age of 18. “Unfortunately, Top Gun had just been released and every would be ‘Maverick’ in the world wanted to be a pilot all of a sudden, and I wasn’t selected for pilot training,” he remembers. “It was a disappointment, but I decided if I can’t fly them, I need to go to Plan “B”, why don’t I help to make them, which is why I joined British Aerospace.” 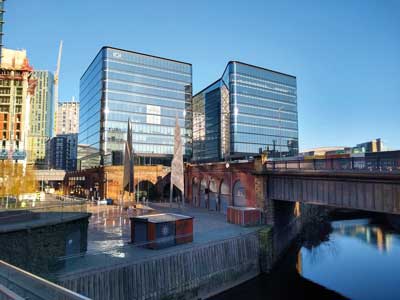 Elland Steel completed the steelwork for the twin office blocks at Salford Embankment. 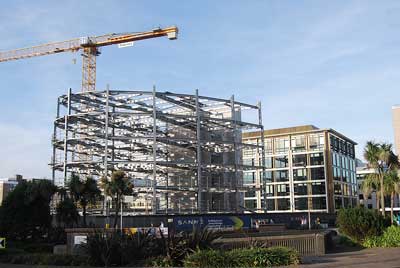 Elland Steel transported its steelwork by sea to Jersey to complete an office scheme in St Helier.

While at Swansea Mark had his first experience with mathematical modelling including finite element analysis, which was to stand him in good stead when he later went on to become a structural engineer. “I had studied mathematics, physics and computer studies at ‘A’ level, so it was a straightforward switch.”

A year at Imperial College earned him a Masters in Structural Steel Design in 1994, and he has been a member of the IStructE since 1999 and a Fellow since 2018.

Mark is also proud of his achievement of Diploma of International Welding Engineer in 2013, proof of a high level of expertise in a key skills area for steelwork fabricators. Mark’s father was a plater and founded Elland Steel Fabricators in 1973 as a subcontractor in general engineering before finding a ready market for the company’s skills in fabricating for the steel construction industry.

“I had found myself at a crossroads at British Aerospace, there didn’t seem to be much opportunity in the field I specialised in, so after discussions about a career change with my father I decided to jump into engineering with both feet, and went to Imperial College.”

After a one-year placement with a leading steelwork contractor, where he worked as an estimate steel designer in the design office, he was ready to start at the family-owned business as a Design Engineer. Mark became responsible for all design and drawing office activities when promoted to Technical Manager in 2000, and became Technical Director in 2002. “I have been lucky to be able to learn from some outstanding engineers like Trevor Griffiths, who was Chief Engineer at Elland Steel Structures when I joined.”

Mark’s early interest and experience of computing at University and at British Aerospace gave him the skills to be responsible for all IT for the company early in his career. He became Managing Director in 2008 and then Chairman on his father’s retirement in 2013.

Mark’s BCSA commitment is of long standing, having become Technical Representative of the Association’s Northern Region on the BCSA’s key Process and Technical Committee in 2001. He has been committee Chairman since 2011.

After imbibing all that the Masters course had to teach him about structures, and picking up how it all worked in practice during his placement at a large steelwork contractor, Mark was undaunted at having to learn about accountancy, marketing and management skills needed to successfully run what is now a £25 million turnover business with over 90 employees.

“I think about 95% of everything I have ever learnt at school or university I’ve utilised at some point in my career one way or another, and it has been a case very much of stepping-stones all along the way. I learned a lot about mathematical modelling and visualisation at British Aerospace and that is coming into our industry more and more.”

Mark is looking forward to his three-year term as President of the BCSA, which Elland Steel Structures joined in 1986. “We have enjoyed a lot of benefits from our membership of the BCSA and have always played a full role in its work, which the whole constructional steelwork sector benefits from.”

Not all steelwork contractors make a financial contribution though, as they are not BCSA members. Mark says his ‘Big Hairy Audacious Goal’ for his Presidency is to have BCSA membership made a minimum requirement in architect’s and engineer’s specifications.

“Some steelwork contractors stubbornly refuse to become members, and that is a loss to them as well as to those who do join and pay their contribution to funding the invaluable work we do. Without BCSA’s staff and members playing the role they do in producing design guidance, and providing designers with all the information and advice they need to make using steel in their designs as straightforward as can be, these non-members wouldn’t have the businesses that they do today.

“They have been having a free ride and I think it is time for them to start contributing. Country’s like New Zealand have a $10 tariff put on all steelwork brought into the country that funds their equivalent of the BCSA. That system seems a lot fairer to me, everybody contributes.

“They would find other benefits if they became members. For example, we had the heads up about the potential impact of CE marking well ahead of non-members, so we had the opportunity to better prepare our businesses to be ready for that challenge.

“I think we need to get the message across to engineers and architects that the benefits of specifying BCSA membership are strong enough that it should be demanded in their tender requirements. The average BCSA member is demonstrably better set up than the average non-member to satisfy client requirements and build quality into their structures.”

Mark says the steel construction sector is in survival mode for the rest of this year, with a bounce back expected in 2021. “Clients had been nervous because of Brexit, but we thought we were just about over that when COVID-19 hit. We are however well placed as a company to be ready for the recovery.

“We got better technically as an industry in the last recession and currently BCSA members are in good shape financially to withstand the storm.”

The BCSA is getting ready to start work for a new generation of design guides. “These are crucial to the future of constructional steelwork in the UK,” says Mark. “The BCSA has beefed up its technical strength internally in the past year or two and we have technical strength in depth among our active members, so we are well set up for the challenge.

Changes in construction procurement seem to be in the wind post the Grenfell tragedy, which Mark welcomes. “We can all see that the procurement system is not fit for purpose. When I explain how construction procurement works to people from outside the industry you can visibly see their jaws drop. We need to stop the race to the bottom that lowest price obsessions create. Quality can’t survive that long term.”

The Mark Denham Presidency will have been a success in his own eyes if the message about the advantages of being a BCSA member get across to more steelwork contractors, and more specifications demand that tenders come from BCSA members only. “There isn’t any need for root and branch change, but small marginal gains can and should always be pursued,” he says.