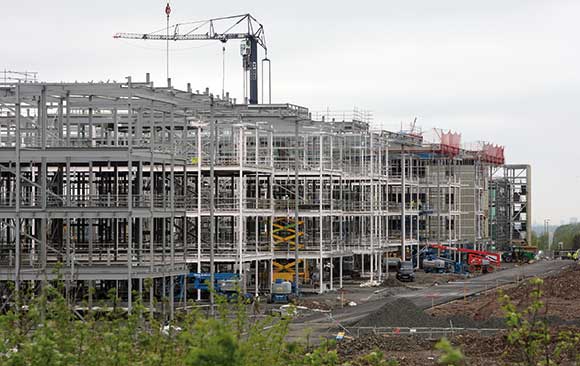 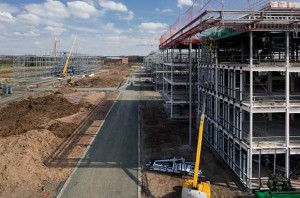 Minimal groundwork was required before steelwork could begin.

When complete in early 2010 Maxim office park will provide a real boost for Central Scotland by creating an estimated 7,000 new jobs when fully occupied. Scotland’s largest ever speculative office development is ideally located along the A8/M8 corridor to attract companies interested in doing business in both Glasgow and Edinburgh.

Bowmer & Kirkland’s Project Director, Paul Dodsworth, explains: “This is Bowmer & Kirkland’s largest ever scheme and it has been a challenge and a pleasure leading such a talented team on the project.” He adds, “Maxim Office Park will set new standards in terms of business park working environments in the UK.”

Maxim’s Chief Executive Karen Campbell agrees, and says: “The fact we are building the office complex and preparing the associated landscaping at the same time, means that the businesses we attract will not be faced with construction disruptions and other associated problems. 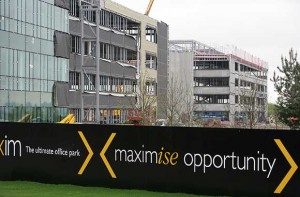 All ten buildings have four levels and the development will offer more than 70,000m2 of floor space.

“The fact that work has already started on all infrastructure, landscaping and ancillary – when this might take a decade or more – means Maxim will deliver on all accounts and create a platform for significant job creation,” adds Ms Campbell.

Expectations are therefore high. Construction work for this prestigious development got under way in mid 2007 with the demolition of the large CPT buildings. Once this was completed the ground was subjected to a rigorous investigation which revealed the site still provided a suitable platform for the new buildings.

“In fact a number of compaction tests during the cut and fill operation were carried out,” explains Kenny Stevenson, Associate Director of Struer, the project’s structural engineer. “The CPT building was built in the mid-1990s on a prepared platform and therefore the ground is still very good, which meant no piling was necessary.”

All steelwork for the ten office blocks is founded on pad foundations and steel erection was begun by Caunton Engineering last October. 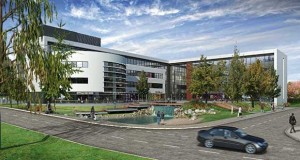 Architect’s impression of Building 3, also known as ‘The Hub”

“On a job of this size coordination with other trades has been paramount,” comments Steven Waterhouse, Caunton’s Project Manager. “We’ve basically put up each steel frame and then handed over to the concrete contractor to install the concrete floor planks. Once this is finished we then return to erect roof purlins and the rooftop plant areas.”

All of the office blocks also require Caunton to erect a load bearing cold formed secondary cladding support frame, which was specified due to the need to provide both external and internal fixing with a reduced overall depth.

Known as a Structural Framing System (SFS), this lightweight metal frame is screwed to the structure’s main frame on all elevations, and accepts the office block’s various cladding – which includes rain screen panels and curtain walling – and copes with any design deflection issues.

Because the concrete planks are installed after the frame is up the initial steel erection has all been done with cherrypickers working from ground level. The roof steelwork is then installed by mobile crane. 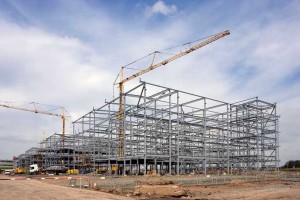 The steelwork is predominantly erected around a 7.5m x 9m grid.

The largest office block on the Maxim site is known as Building 5 and this structure backs onto the A8 and faces in on the majority of the rest of the project. The block offers 17,330m2 of floorspace, more than double of any of the other buildings and required approximately 1,000t of structural steelwork.

Building 5, like its neighbour Building 4, features a colonnade along the internal elevation which provides a sheltered pedestrian walkway. This architectural feature is formed from large 356mm diameter tubular hollow sections. These unrestrained members are braced at roof level and then connect back to the structure’s main frame via large T-sections.

As all office blocks feature four levels, including ground floor, an important criteria for the project was to maximise the available square metreage by reducing floor heights.

“We’ve installed an array of cellular beams on the majority of the blocks,” explains Mr Waterhouse. “Keeping services shallow was of paramount importance and they are all approximately 650mm deep.”

Mr Stevenson agrees about the importance of maximising the available floor to ceiling heights and adds: “We had to be careful with floor diaphragm loads as using concrete planks, with raised floors on top, meant there was no screed on the floors.” 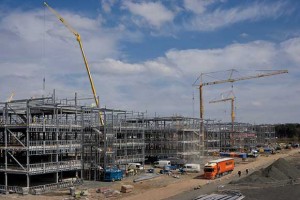 The steelwork is predominantly erected around a 7.5m x 9m grid.

Building 5 is nearly 100m-long and presented the challenge of where to locate bracing. One elevation features an uninterrupted curtain walling facade and linked bracing could be placed within it.

Struer says the structural design had to be ingenious about where all the building’s stability- giving bracing was placed. “We’ve used various locations around each structure such as stairwells and risers,” explains Mr Stevenson.

Five of the office blocks are similar in shape and size and are known as Buildings 6, 7, 8, 9 and 10. These buildings each have 5,446m2 of floor space spread over four floors. The structures, as do all building’s on the project, generally have grid patterns with spans up to 9m.

“Many of the grids are 7.5m spans, but having spans up to 9m was another way of maximising the floorspace with open plan column-free areas,” adds Mr Waterhouse.

As well as office space, Maxim will offer tenants a wide range of retail and leisure opportunities
in addition to the adjacent Dakota Hotel and conference complex. The majority of the retail outlets will be housed on the ground floor of Building 3, also known as The Hub.

This L-shaped structure features the same grid patterns as the other structures but because of its central location within the project it overlooks a small park and lake area. The Hub also features a large curved annexe which is three levels high, with the upper level likely to be used as a viewing gallery. This essentially architectural feature was formed with curved beams and large CHS members. 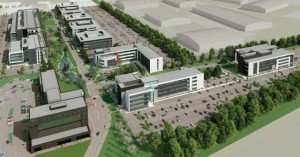 Impression of completed Maxim park which is due to open by 2010.

As well as construction of buildings, a major landscaping operation has begun which will create 9,500m2 of lawn and lakeside picnic areas as well as woodland. The development will also have a putting green, various refreshment outlets, hardstanding areas and an on-site nursery with an external play area.
Property managers CBRE have been reported as saying the intention at Maxim is to create the best modern working environment where occupiers enjoy all of the benefits of an out-of-town location but are also part of a vibrant commercial community.