One hundred and out 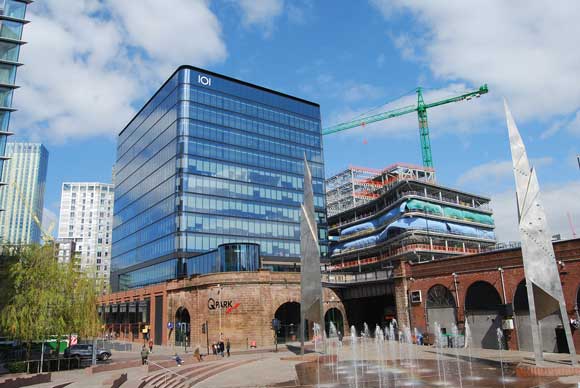 Both buildings sit on a podium once occupied by Exchange Station

Sat on the banks of the River Irwell, overlooking Manchester Cathedral, both buildings are situated on a plot once occupied by Exchange Station that closed down in 1969.

Although the original buildings and platforms are long gone, the sandstone façade of the masonry podium that once supported the station has been retained. The podium forms the exterior for a three-storey car park on top of which the two office blocks now sit.

The steel-framed car park infills most of the retained façade, except the rounded corner areas, creating 442 spaces. It was erected as part of the initial phase, along with building 101.

The roof of the car park or podium deck initially presented the design team with the project’s biggest challenge. Both of the office buildings have a similar design that includes main columns set at 7.5m centres, which does not match the car park grid below.

The client’s requirement to maximise the number of car parking spaces did not permit either of the building cores to continue down through the podium structure. Therefore, steel-framed braced cores sat on transfer structures positioned at podium deck level have been adopted to minimise the loads.

Encompassing an area around each of the building’s cores, which equates to approximately one third of their footprints, the two transfer slabs have employed an innovative design, with a 1,500mm thick RC slab built off a 130mm thick composite slab acting as permanent formwork. 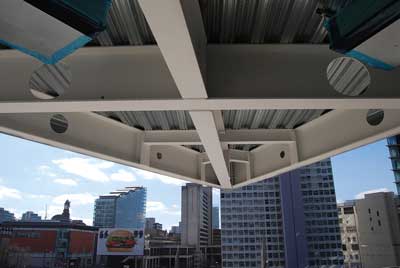 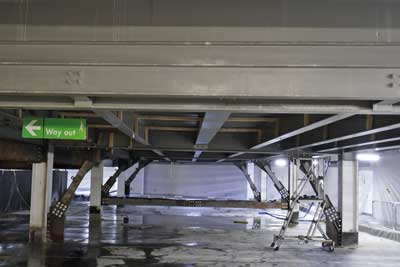 “During phase one, transfer beams and a temporary slab were installed over the area where building 100’s core would sit,” explains BAM Construction Senior Design Manager Chris Edwards. “When we started on-site for phase two, we initially had a 16-week enabling works programme, which required us to take possession of the car park’s top level, while we broke out the temporary slab, and installed temporary steelwork to enable the pouring of the new 1,500mm-thick slab.”

During the enabling works, steelwork contractor Elland Steel Structures installed more than 40t of temporary steelwork to support the load of the wet concrete in the temporary case.

Once these early works had been completed and Elland Steel had removed the temporary steelwork, it was able to begin its main steelwork erection programme.

Building 100 is similar to its neighbour, although it is one floor lower with a slightly larger floorplate, which means it has approximately the same lettable space.

The steel frame consists of CHS columns supporting cellular beams offering clear internal spans of up to 12m. The beams are all 680mm-deep Westok members, with 475mm diameter holes for service integration.

Kloeckner Metals UK Westok first became involved with the project in 2014 when it provided Elland Steel with a first draft value engineered floor solution for the first tower.

By adopting a mix of Westok cellular beams at the office levels, and discrete Westok plate beams at both office and podium deck level, savings were realised.

Kloeckner Metals UK Westok Design Team Manager John Callanan comments, “It’s particularly pleasing to see the second tower taking shape and it has been a fruitful exercise working closely with the Manchester team at Ramboll and Elland Steel on both blocks.”

Internally, the building is not quite column-free as there are five CHS columns, installed to break up a span that would have been more than 20m-long.

“Without these five columns, it would not have been possible to follow and adopt the same structural depth as the adjacent Building 101,” explains Ramboll Senior Structural Engineer Allan Wilson.

Offering some aesthetic appeal around the exterior, all of the perimeter CHS columns are set within a 900mm cantilever and will be left exposed in the building’s completed form. These sections are 406.4mm diameter columns at the lower levels, decreasing to 323.9mm diameter columns for the upper two storeys.

“The perimeter columns are not the only elements to be left exposed,” adds Mr Edwards “A client-driven decision means the entire steel frame will be on show in the completed building, along with the underside of the floors and all of the services, creating a modern industrial-like office environment.”

Adding some more visual appeal to 100 Embankment, the structure’s perimeter incorporates curves to follow the shape of the listed retained façade of the podium, and includes a 7m cantilevering prow on its south western corner.

100 Embankment is due for practical completion by June 2020. 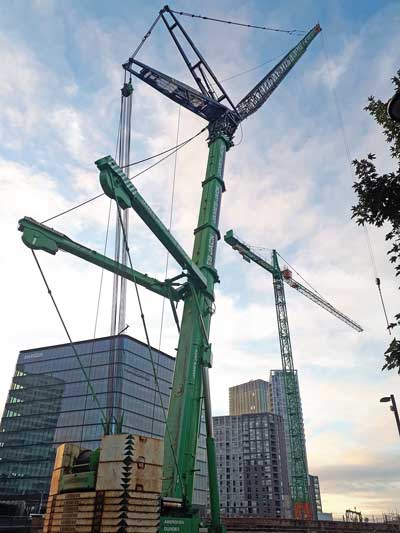 Both 100 and 101 sit on an island site, as the podium is surrounded by roads, railway lines, the River Irwell and a culvert.

Logistically, this is challenging when it comes to bringing material to site, as there is little or no room for temporary storage and access routes are also limited.

Erecting the site’s tower crane encompassed all of the project’s logistical challenges, as the mobile crane needed to erect it could not be positioned anywhere near.

“When the first building was built, the site had the adjacent vacant plot,” explains BAM Senior Design Manager Chris Edwards. “For this building we had no room on site and the project’s surrounding roads could not be used as they are either bridges, and couldn’t take the weight of the crane, or in the case of near the cathedral, too close to historic crypts.”

The solution was to use a 500t-capacity mobile crane, positioned on the opposite side of the River Irwell. This large crane required a 150t-capacity slave crane to erect it and had a reach of nearly 80m to lift the tower crane’s elements into place.

A similar challenge is anticipated at the end of the project when the tower crane is dismantled. As it will be surrounded by the completed steel frame, an even larger mobile crane will be required to lift the tower crane’s elements out and over 100 Embankment.