The north site will open out onto a new piazza

Part of a multi-million pound regeneration scheme and spread over two sites, the Wigan Life Centre is a multi-function facility set to invigorate the borough. Martin Cooper reports.

‘Wigan is changing’ says the slogan adorning the town council’s website. Wholesale change is afoot and large parts of the town centre are being regenerated, as anyone who has visited Wigan during the past five years will testify.

The importance of this is clear, as a large portion of the council’s website is given over to information on the transformation which is now in full swing.

Known as the Unitary Development Plan, the council’s aim is to promote the town centre as the preferred location for retail, leisure and office developments, while simultaneously halting the trend towards out-of-town locations.

The most recent stage in the development was the £80M Grand Arcade scheme (see NSC July/Aug 2006) which provides more than 37,000m2 of retail floorspace and a new Debenhams department store. 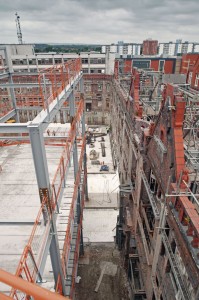 The next stage in this masterplan is the construction of the Wigan Life Centre, a project described as a one-stop-shop for council and partner services and a Healthy Living Zone, which includes a health suite and a new swimming pool.

Spread across two sites – North and South, which are separated by the main council offices – the project has brought much-needed employment into the town. Written into the contract with main contractor Morgan Sindall is a commitment that local people will be employed whenever possible; two thirds of those on site are from the Wigan area and the majority of the subcontractors have also been sourced from the locality.

Structural steelwork is playing a major role on this project (as it did on the Grand Arcade). It is the South site where the majority of the project’s steelwork will be installed to form the Healthy Living Zone. A key element of this structure is the provision of joined up and integrated health, social care and healthy lifestyle services. It has been designed to provide preventative health services to the whole community. Included in the building is a 25m long swimming pool; a 13m learners pool, a gymnasium; two aerobics studios, and steam and sauna facilities.

Built on the site of the town’s former swimming pool, the new structure makes use of the old basement level which was retained after the demolition process. The building has four levels, including the basement, with both swimming pools located on the suspended first floor level.

One of the project’s most challenging aspects is along the eastern façade where a 37m-long by 7m deep ‘king’ truss has been erected to help create the open column free area for the main pool.

Weighing 53t, the truss will support two floors and the roof above the centre’s swimming pool. Steelwork contractor Elland Steel brought the truss to site in six sections, assembled it on the ground and then lifted it into place during a 10 hour operation.

Elland Steel’s Contracts Manager Adrian Smith, says: “We needed a 1,000t capacity mobile crane to lift the fully assembled truss. The actual lifting of the truss to full height only took about 10 minutes, but it had to be held in position by the crane while the infilling steelwork was attached and this took all day.”

Spanning from the top boom of the truss to the western façade of the structure are a series of 28m long trusses which form the pool’s roof. Constructed from 150 x 150 hollow sections, these trusses are brought to site in two equal halves, before being assembled and then lifted into place as complete units. 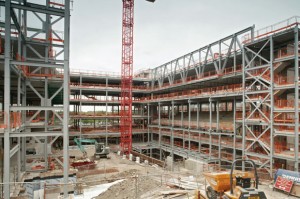 Space is at a premium. When the ‘king’ truss was erected there was sufficient room to assemble it on site before the lifting procedure. By the time the smaller roof trusses were erected, the main structure had also been erected eating up all available lay down areas. So these trusses were assembled on the completed fourth floor slab, before being lifted into place.

The roof trusses are multi-purpose as they also support two cantilevers on level two. These protruding floors, which overlook either side of the main pool, are hung from the trusses above.

“As the roof trusses are some of the final steel elements to be erected, we’ve had to install temporary steel to support the cantilevers,” says Mr Smith.

Fifty metres up the road on the North site, approximately 500t of structural steelwork will be erected by Elland Steel. This part of the project will eventually house the council’s one-stop shop for information and services; health and community matters, citizens advice and tourist information. On the ground floor the structure will also incorporate a library and a central glazed atrium.

In order to incorporate the sloping site into the design, this four-storey steel-framed structure has a ground floor front entrance on what is the third floor level at the back of the building.

“A large cut and fill operation will be required once the structure is complete,” explains Morgan Sindall Senior Contracts Manager Brian Barritt. “This maintains the street levels at the front of the building with the rest of the town centre.”

Another interesting element is the fact that three sides of the new structure will feature a retained façade from the former council library building. These walls have been underpinned and propped prior to the erection of the new steel framed innards.

“We’ve installed padstones all the way around the retained façade to accept the new steelwork,” adds Mr Barritt. “As the steel erection has progressed we’ve also had to conduct weekly checks on the façade, just to make sure it has remained in position.”

The Wigan Life Centre is scheduled to be completed by late 2011. 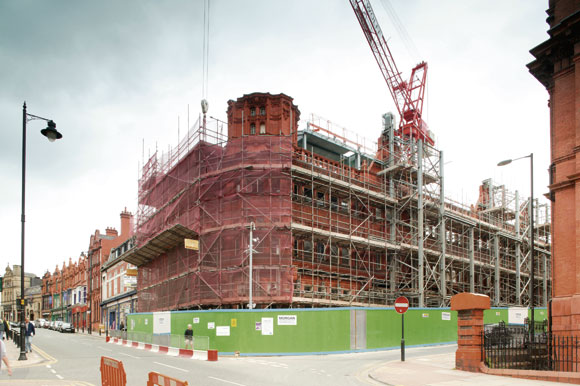 Busy construction sites in bustling town centres can quite often be a recipe for, if not disaster, then at least headaches for contractors and inconvenience for shoppers and visitors. This is of upmost importance to Morgan Sindall and Brian Barritt, Senior Contracts Manager says: “We want the local population to have a positive perception of the site. There’s no congestion, no litter or obstructions around the site and as little noise as possible. People see the projects, but are able to carry on with their day-to-day business.”

To achieve this, deliveries of materials to site are all scheduled around a just-in-time basis as there is little room for storage on site or even around the site. This has not had any negative impact on the steel programme, as Elland Steel has encountered similar circumstances. “The only exception to this rule was when we installed the large 37m-long truss,” says Adrian Smith, Elland Steel Contracts Manager. “All steelwork was delivered and assembled on site, but we had to get permission to assemble the 1,000t crane on an adjacent street the day before the lift and then re-rig the day after.”