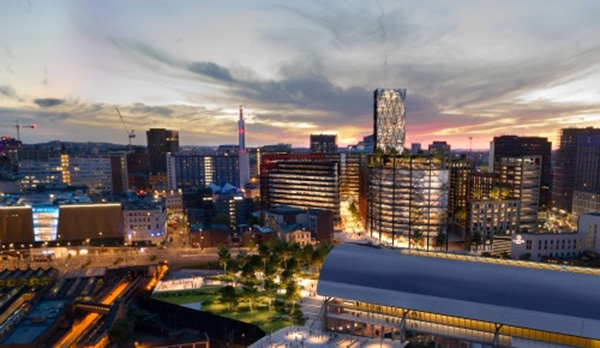 Developer Hammerson has revealed its vision for the regeneration of Martineau Galleries in Birmingham city centre, the first major scheme to be brought forward as part of its City Quarters concept.

Proposals for the 7.5-acre Birmingham site include up to 1,300 homes and 130,000m² of workspace that will offer opportunities for a range of businesses, as well as a new city centre hotel, restaurants and cafes.

The scheme will also deliver a signature gateway to Birmingham from the proposed Curzon Street terminal (part of the proposed HS2) and high-quality public realm, including a new public square and boulevard.

Hammerson Development Director Robin Dobson said: “We are pleased to share the plans for our first major City Quarters scheme for this strategically important site in the heart of the city.

“Martineau Galleries will be a new, vibrant neighbourhood in the centre of Birmingham, where we are already a long-term investor. Hammerson has a strong track record of creating great destinations, not just in Birmingham but across Europe, and we look forward to finalising our masterplan, ahead of submission later this year.”

Following the public consultation, Hammerson intends to submit an outline planning application to Birmingham City Council later this year, with the aim of starting works in 2022.