Bracknell’s retail offering will be more than doubled

Steel construction is playing a leading role in a £250M retail scheme that will transform a large swathe of Bracknell town centre.

Construction work is now under way on Phase 2 of a new retail quarter in the town centre designed by BDP and Chapman Taylor for Bracknell Regeneration Partnership, a joint venture between Legal & General and Schroders along with Bracknell Forest Council. Working on behalf of main contractor Mace, Severfield is undertaking all of the structural steelwork for phase two, as well as installing metal decking.

Known as The Lexicon, the scheme is a shopping and leisure destination, which promises a vibrant mix of brands and experiences and a high quality mix of shops and venues connected in a pedestrian-friendly environment.

Phase one of the scheme consisted of the construction of a steel-framed Waitrose supermarket that was completed in 2011. Acting as one of the anchors for the overall scheme, this structure was fabricated, supplied and erected by Billington Structures. 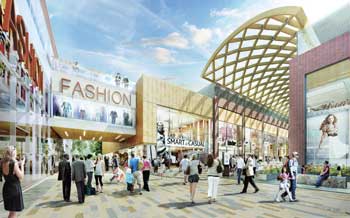 Visualisation of a Lexicon mall 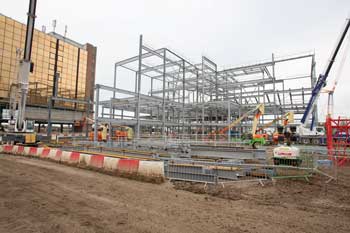 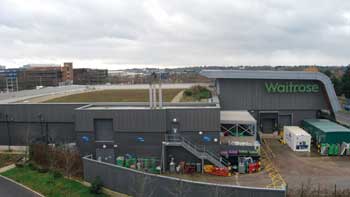 Phase two, which kicked off on site in 2015 covers an area of 60,000m² and comprises two department stores, retail units, restaurants and cafes, a 12-screen cinema, multi-storey car park and 92 apartments.

Prior to Mace starting on site, the demolition of the site’s 1960s and 70s built shopping district had been completed. Early works included a huge earthmoving operation to level the sloping topography. Piling was then undertaken and this work has continued alongside the steel programme, although in areas where it had been completed, Severfield was able to begin erecting the new structures.

Mace Project Director Andrew James says six of the new structures within the scheme are steel-framed buildings and the material was chosen for its long-span qualities and speed of construction. Another important consideration is steel’s flexibility and adaptability, which allows for different shop configurations to be installed if and when the client changes or retail requirements alter.

A further building within Phase two is also steel-framed and this is a nine-storey structure dating back to the 1980s (pictured above). Originally designed as an office block on top of a two-level retail podium, the structure is being renovated to accommodate residential units on the upper seven levels.

The original podium has been demolished and approximately 300t of new steelwork will be bolted to the existing tower to form a much larger two-level podium that will accommodate an H&M store as well as numerous food outlets.

The six new steel structures being erected by Severfield consist of two anchor department stores (Marks and Spencer, and Fenwick), and four other retail blocks, one of which incorporates the cinema complex.

The two 7,400m² department stores are situated either side of the concrete-framed mult-storey car park, and because they link directly into the facility their designs have dictated the latter’s.

“This area had a very steep slope that had to be infilled,” says Mr James. “Plus getting the anchor stores erected first was important as they have the longest fit-out programmes.”

Just before M&S was fully erected another Severfield erection gang had begun on the adjacent Fenwick store.

“Using a number of 80t-capacity mobile cranes and up to five gangs of erectors we have staggered the steel programme so at least two buildings are being progressed at any one time,” explains Severfield Project Manager Robin Hamill. 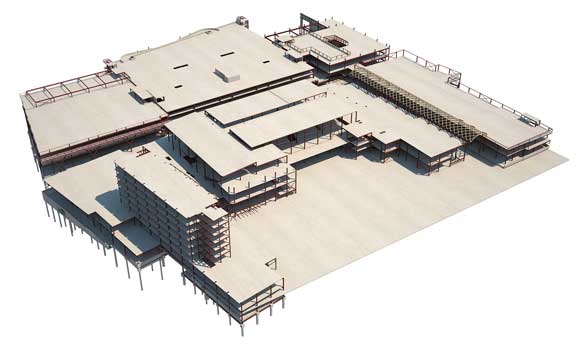 With three trading floors to fit into a building with a similar height to the M&S store, and with the need to tie into the adjacent car park, the building has floor-to-ceiling heights of 5m.

To help reduce the floor depth the services are integrated within 750mm deep fabricated plate girders with 1,200mm wide × 450mm deep notches in the ends and 300mm diameter holes in the web.

The different floor-to-ceiling heights and number of floors within the anchor stores was client driven,” explains Arup Project Engineer Ewan Smith. “It did mean some redesign work was necessary on the car park to align the floors.

“In order to keep the department stores’ overall heights similar the Fenwick store has integrated services within cellular beams, while height wasn’t an issue for the M&S structure so it has fewer floors and large services voids between floors.”

The project’s largest structure is known as building five, which measures 100m x 90m. It accommodates two levels of retail units, based on a typical 7.8m × 13.5m grid with the cinema located above on the third level.
Some flexibility has been achieved within the retail floors as an extra mezzanine floor has been accommodated within the area to be taken by a Next store.

“The large retail grid works well with the cinema above,” adds Mr Smith. “The auditoriums have to be column-free spaces and so their column locations have dictated the pattern below in the retail levels.”

Completing the steel package are two more steel braced frame retail structures known as buildings four and eight. The former will accommodate double-height units with a mezzanine capability based around a 7.8m × 10.2m grid, while eight is similar in design except it has a larger 7.8m × 13.5m grid pattern.

The final steel-framed retail block [building eight] is situated on a plot separated from the main scheme by the existing pedestrianized High Street. This part of The Lexicon is known as Charles Square and it will also include an adjacent concrete structure.

“Logistics is a key issue as the site is very congested with numerous trades and surrounded by busy roads, the existing town centre retail area, a police station, council offices, a library and residential properties,” says Mr James.

“When it comes to working at Charles Square, logistics will be even more challenging as one of the buildings is landlocked by the existing pedestrianized streets which remain open to the public throughout the development. This effectively cuts the project into three.  There is no direct road access to one of the buildings and so deliveries of materials, such as steelwork, will have to be made through an existing structure that has been part-demolished and will form part of building eight in the completed scheme. We will use an online just-in-time delivery system to aid this work.”

The project will utilise a variety of cladding materials including brick, timber, aluminium, coloured glazing, and gold/silver coloured copper cladding.

The Fenwick store in particular will standout as it will be clad in 5mm-thick perforated anodized aluminium rainscreen cladding, which will be backlit. This system is bespoke and has been developed specifically for this scheme.

The predestrianized streets within the scheme will be spanned by canopies formed with steel and glulam beams covered with ETFE.

Another key concept for the scheme is the public realm design, which forms part of the ‘greening of Bracknell’ to transform the character of the existing town. A large open space, which could be used as a outdoor auditorium, is being constructed between the M&S store and Waitrose.