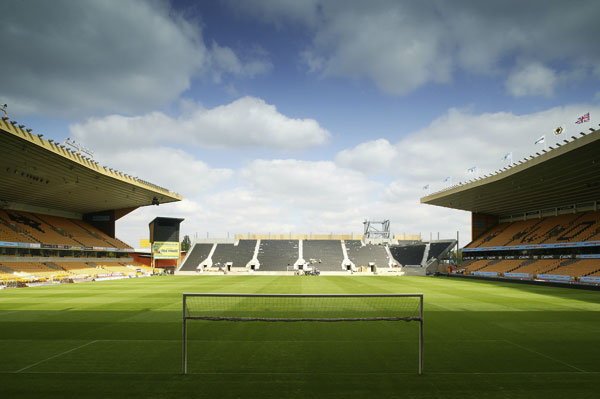 Construction work on the new North Stand at Wolverhampton Wanderers’ Molineux Stadium reached a milestone last month when the lower tier was used for the first time for the Premiership fixture against Tottenham Hotspur.

Part of a three phased project to increase the ground’s capacity to 38,000, the North Stand replaces the old Stan Cullis Stand, which was demolished during the summer by main contractor Buckingham.

“We are working to a tight schedule, which is based around the football calendar. Having completed demolition during the close season, we’ve had to get the new lower tier erected as quickly as possible. Having handed over the lower tier we’re now constructing the upper tier and roof throughout the rest of the current campaign,” explained Buckingham Project Manager Richard Lakin.

The two tier stand will have 7,500 seats, topped with a large cantilevering roof which is supported by two feature masts that tower 20m above the structure. Within the stand there are five floor levels: a ground floor concourse accommodating concessions and toilets as well as the megastore and museum; a level 2 concourse offering access to the lower tier seating; level 3 houses the executive boxes; level 4 is the upper tier’s concourse, housing more concessions and toilets; and level 5 is a plant area.

Barrett Steel is erecting the steelwork and the precast terrace units; alternating on a daily basis between erecting a bay of steel and then installing the precast units. Each bay measures approximately 7m wide and steelwork consists of three columns and one 25m long raker per bay.

“Speed is vital for this project, especially for the work we did on the lower tier,” said Michael Bryars, Barrett Steel Project Manager. “Steel construction leads the way, as immediately after one bay of steel is erected the fit-out contractors move-in right behind us.”