New school is lesson in design 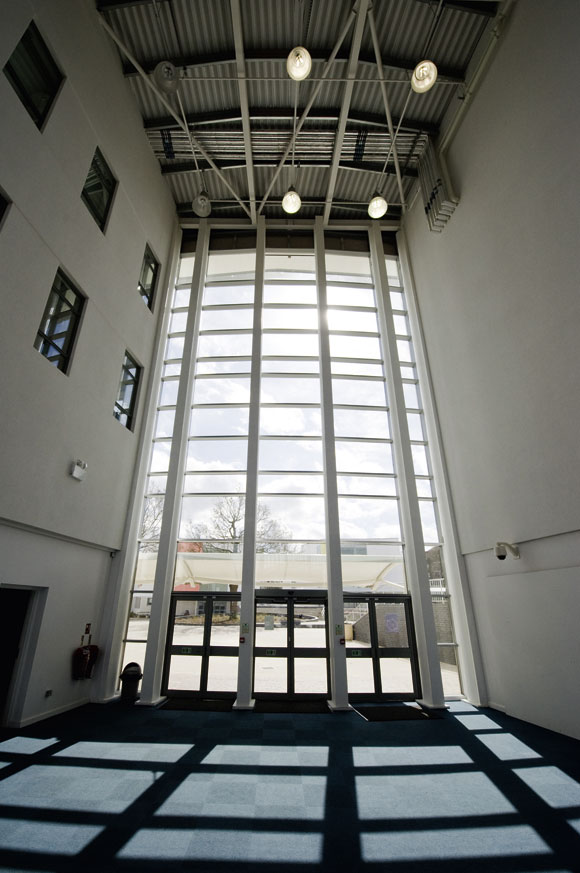 Large internal spans and plenty of exposed steelwork were central to the design of new buildings for a school in south London renowned for its performance and drama facilities.

One of the largest schools in the capital and the biggest in the London Borough of Lewisham is nearing completion after being completely rebuilt. Students at Sedgehill School in Catford moved into some of their new school premises this January, with the remainder of the buildings scheduled for completion this summer.

As with most new school projects, construction at Sedgehill has been undertaken while most of the adjacent old buildings were still in use. Once the new school is entirely up and running the original school will be demolished making way for new sports pitches and landscaped gardens.

The school is one of only a few London schools with a Performing Arts Specialist School tag and this is reflected in its new drama and dance facilities, with four studios and an ‘agora-style’ central external performance space which is intended for local community and school outdoor activities.

The outdoor performance area is central to the school’s design with the new buildings arranged around it. The buildings consist of one large steel-framed crescent shaped structure which houses the main entrance, offices, drama and dance studios, sports hall and some classrooms, with four smaller dedicated classroom blocks opposite.

Most of the school buildings are three storeys high, including the large main building, although this structure does contain a number of building-high open spaces, such as the drama theatre, sports hall and entrance area.

“That’s why steel was chosen for the main school building,” explains Nick Calvert, Project Engineer for SKM. “The long internal spans needed for the drama theatre and sports hall all lent themselves to steel construction.” 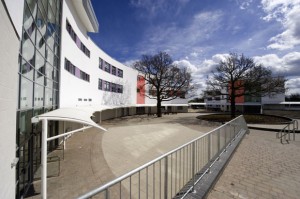 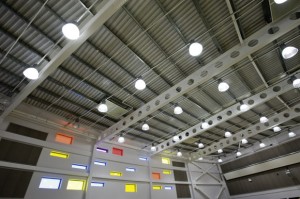 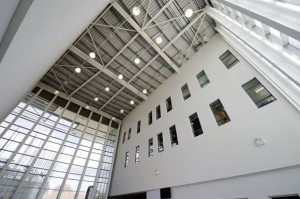 Large column-free areas were integral to the design

Working on behalf of main contractor Costain, Bourne Steel has erected 475t of structural steelwork for the project. The majority of the steelwork was completed by the end of 2008, however one section, around the new sports hall, could not be finished until earlier this year as a small building had still to be demolished.

Architectural features are high on the agenda for the main school building. There are no cores for stability within this structure so bracing has been placed in a number of locations, much of which is on view. The drama studio needed to be a large open column free space and the roof has been formed with a series of 23.8m long cellular beams.

“These beams are on show in the completed building and that’s why we chose to go with cellular rather than regular beams,” adds Mr Calvert.

The cellular beams were all brought to site in two pieces and spliced together before being erected. The beams also have a crank in them to accommodate the building’s roof ridge.

Another interesting and visual element within the drama studio is the bracing along one wall. Again this is in full view and has been installed as a feature rather than secreting it within a partition wall. The vertical bracing was installed as a 21m wide storey high truss which was delivered to site in two fully welded pieces. They were then welded together on the ground before being lifted and placed on to spigoted columns.

The drama studio is a large space and bracing was required along one complete elevation as there was no diaphragm continuity. Horizontal loads had to be transferred through to the 300mm deep braced truss which allowed services to pass through the void.

Adjacent to the drama theatre, the school’s main entrance is another large open structure-high area. There are no internal columns, except for perimeter members arranged along the front and back external elevations.

These 15m high steel columns are again architectural features and have been fabricated from 273mm diameter CHS members with a T-section plate welded to the back as a stiffener. These columns support curtain walling and there are eight of them at the front and four at the back.

“If we’d have used just CHS columns they would have been much larger sections (457mm diameter) and the clear spacing between the members would have been less,” says Mr Calvert. “By using specially fabricated sections we have more open space around the entrance hall perimeter.”

The rest of the main school building consists of offices, a dining hall and some classrooms arranged over three levels. On the eastern end of the structure there is the portal framed sports hall with spans of 15m.

The sports hall was, as previously mentioned, one of the final sectors of steelwork to be completed by Bourne.

“We also had to finish off the feature canopy at the front of the entrance hall,” adds Dave Jackson, Bourne’s Site Manager. “We erected the majority of the canopy, but because an existing boiler house had still to be demolished we had to temporarily prop one final section.”

The canopy is supported on six 16m long CHS columns, and the last two of these members were only erected once the old building was gone. The boiler house had a chimney which was the main obstruction to completing the canopy, and its foundations have been reused for the new columns.

Commenting on the new school, Karen Bastick-Styles, Head Teacher of Sedgehill School, said: “The opportunity to design a new school for the students and staff has been an incredibly exciting experience. It’s allowed us as a community to think creatively and innovatively about the type of teaching and learning we want to develop.

“The building really is quite beautiful. The colours, the bright light spaces and the campus design with and centre circle as a focus point, combine to make Sedgehill feel like a special place.”