The growth in traffic within UK towns and cities reduces the safety of pedestrians and can make walking on roads an unattractive activity. This bridge forms a new access across a river. Phil Bailey reports.

Rural West Wales is no exception and the increase in traffic in the ancient coastal town of Aberystwyth, Ceredigion County Council has provided the impetus for the development of new pedestrian facilities across the Afon Rheidol. Currently pedestrian access from the southern part of the town to its centre is via a listed masonry arch road bridge. This has caused a major constraint to traffic flows and inconvenience to pedestrians and cyclists over the years.

Spurred on by the need to create a safer pedestrian crossing route, Ceredigion County Council commissioned the new Trefechan footbridge with financial support from the Welsh Assembly Government and the Welsh Development Agency. As a part of the National Cycle Network, Sustrans and Ceredigion County Council have proposed cycle routes into Aberystwyth and along the Rheidol Valley which will link to the new footbridge. Owing to the limited areas of land available on approaches to the new bridge and design and financial constraints, cycling across the bridge will be discouraged. However cyclists using the adjacent cycle route will be able to push their cycles the short distance across the bridge reducing the demand for use of the existing route and road bridge.

Following a three-month tender period, Ceredigion County Council awarded a designand- construct contract to Dean & Dyball Construction Ltd. in June 2002, with Hyder Consulting as lead designer. The value of the works was £650,000 over a 28 week contract period.

The successful design was a two-span asymmetric cable-stayed structure of overall length of 67m. This final solution was developed from a requirement to provide an aesthetically pleasing structure and also the need to minimize disruption to the river, both during construction and in service.

It included a number of features aimed at improving buildability and making use of modular construction.

The bridge is focused around a single steel tower support at third span with the bridge deck following a vertical curve of radius 290m. The vertical profile could have been achieved by using radiused steel sections for the deck, but it was felt that the additional fabrication costs could not be justified, and a similar effect was created by using a series of straight sections, giving the illusion of a curve from a distance. This also enabled the deck to be fabricated in sections and then simply bolted together on site. The parapet posts, tower legs and lighting columns are arranged so that they are ‘normal’ to the tangent of the curve to further enhance the appearance.

The bridge deck is formed by nine straight sections with twin 450mm x 250mm rectangular hollow sections, spaced at 1900mm as the main longitudinal members. In order to achieve the necessary tolerances, the ends of the hollow sections were machined and end plates welded in place to provide bolted splice connections. Structural hollow sections were chosen for their torsional stiffness and the ‘clean’ appearance – there are no sharp edges or ledges where debris or water can gather or birds can nest. 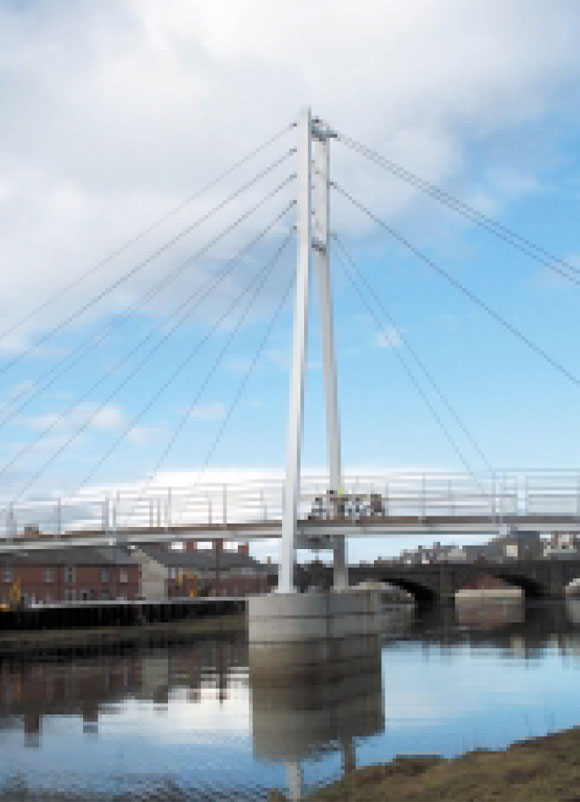 This enables easier painting, ensuring that the desirable thickness is achieved throughout and therefore assisting the long term maintenance of the paint system. The main longitudinal members also provide support to a oak timber deck and outwardly curving steel/timber parapets give an unobstructed footway width of two metres. Locally grown Welsh oak timber from a sustainable source was used for all timber on the bridge.

The longitudinal members are supported every 7.5m by 25mm diameter spiral strand. The strand is pinned at its connection with the tower and has a length of threaded bar incorporated at its lower end. This threaded bar passes through 90mm diameter circular tube, which in turn is welded through a transverse 324 x 16 CHS. This small tube is set at an angle to suit the inclination to its corresponding connection with the tower.

The transverse CHS fits into a half circle machined into the longitudinal RHS. This enabled the steelwork contractor to machine and fabricate all longitudinal and transverse members separately, then joint together and adjust the orientation later, prior to welding in place. The tower is 18m tall and constructed from twin braced 450 x 250mm structural hollow sections. It was constructed in two halves and, in order to keep site painting to a minimum, bolted joints were used for site assembly. The joints were designed with internal tapped blocks and countersunk headed bolts, inserted from the outside. The tower is inclined towards the north bank (perpendicular to the deck) and has top 35mm diameter spiral strand anchor cables secured to the north abutment.

The abutment ends of the longitudinal deck members have been widened to give a horizontal alignment which provides a transition onto the approach ramps. The abutments and approach ramps are constructed from reinforced concrete, faced in local masonry with a maximum approach slope of 1:15.

It was recognised initially that a foundation would have to be cast in the river to support the central pier. Although at low tide the flow in the river is relatively low, a cofferdam would still be required in order to cast this foundation. During value engineering of the various options the idea of using the cofferdam as part of the permanent works was developed. Sheet piles were driven in an oval shape to form the cofferdam and a reinforced concrete pilecap was then cast inside the piles and founded 400mm below bed level. A structural connection to the piles was achieved by welding steel channel sections to the inside of the piles to act as a shear key. The piles were then cut down to the top of the pile cap.

Purpose made precast reinforced concrete rings were lifted into place to form the permanent shutter for the main pier. Reinforcement was then extended up into the void and concrete poured. Steel templates were used to locate the holding down bars for the tower, prior to pouring the pier concrete. This ensured good fixity and accurate and easy location for the tower baseplates during erection.

Buildability has been a constant theme in decisions taken during design and construction of the bridge. During construction the segments of the bridge were assembled at site into three larger sections. A temporary support trestle was positioned 10m from the south bank and this helped support the longitudinal beams prior to the cables being connected. 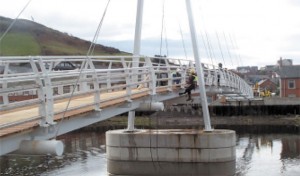 The choice of structural steel has not only supported the buildability requirements due to its relative lightness but enabled the required slender profile and appearance to be achieved. The bridge is painted a very light grey which, coupled with the small diameter support cables used, gives a ‘transparent’ feel when viewed against a bright sky. Touches such as the use of outwardly curving parapet posts serve not only to enhance the profile but to give a wider feel to the deck.

From a maintenance aspect, the ‘clean’ appearance is complemented by the largely timber deck which is constructed from removable panels to enable easier access for the repainting of steelwork.

The imminent completion of the Trefechan Bridge is already prompting development of local pedestrian/cycle routes. The Council proposes to construct a new route from the bridge to the south while the National Cycle Network’s plans for extension of Route 81 are likely to link to routes within Aberystwyth.

In the short-term, it will ensure that all traffic in this part of Aberystwyth moves around more safely and create an attractive new landmark in the town.

Phil Bailey is a Technical Director with Hyder Consulting