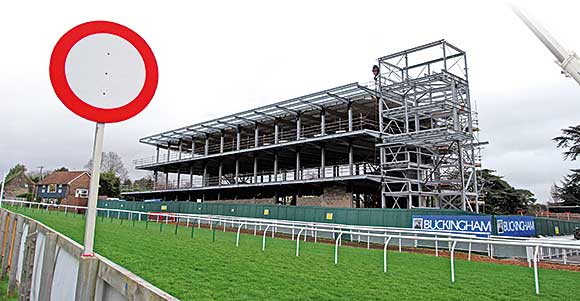 A new architecturally prominent three-storey grandstand is set to turn Fontwell Racecourse into one of Sussex’s main conference and exhibition venues. 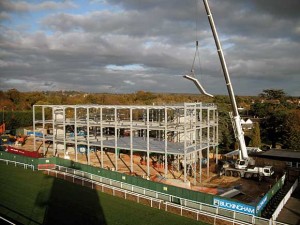 Work is underway at Fontwell Racecourse in West Sussex to create a new three storey grandstand featuring hospitality boxes, a restaurant for 250 people and a multi purpose exhibition hall on the ground floor with catering and betting facilities. The structure will also feature a terrace area providing a mixture of seating and standing for a further 1,200 spectators.

Work at the picturesque south coast racecourse began last Summer with the demolition of an old 1920s stand, which cleared the footprint for the new and bigger structure. By October the groundworks, which included the installation of retaining walls at one end of the footprint to help level out a sloping site, had been completed and steelwork erection was able to commence.

During this time and in fact throughout the construction programme Fontwell’s fortnightly race meetings have continued unaffected by the works.

“We’ve had to coordinate our programme and work around the meetings,” explains Brett Kanjurs, Buckingham’s Project Manager. “On race days we normally stop working at 10am.” 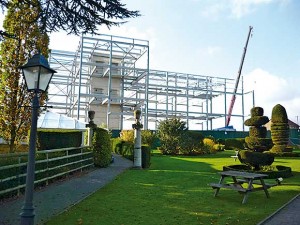 There is no room for materials storage behind the new stand

Aside from having to work around Fontwell’s busy horse racing calendar, getting materials to site has proven to be quite a challenge. There are turnstiles and occupied buildings directly behind the new structure, effectively denying the site a lay-down area or a major access route.

The new stand is also positioned directly in front of the track’s finishing line and as this important part of the grass course must be left untouched by construction vehicles, most materials including steelwork, have been lifted over the track from the centre of the course.

“We’ve used two cranes for the project, one 80t capacity crane to lift steel over the course and another smaller 35t crane positioned next to the structure to erect the material,” explains Ian Burchnall, Contracts Manager for steelwork contractor D.A Green & Sons.

An access route to the centre of the course has been opened up to the construction team via a public car park on the far side of the track from the new stand. Deliveries can cross the grass track at this one designated point and then proceed to a point opposite the new stand.

“When steelwork is delivered we’ve always had the larger crane on site,” says Mr Burchnall. “While the smaller 35 tonner is small enough to gain access onto the site’s footprint.” 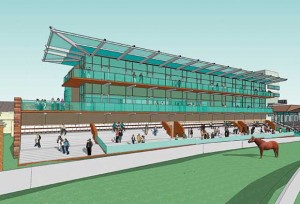 The architectural vision for the new stand

and the installation of all metal decking. The stand’s stability is derived from bracing located around the lift shafts and stairwells.

Commenting on the design of the stand, CampbellReith Associate Julian Birbeck, says: “Steel is quick to erect as there is a tight programme and this swayed the decision to go with this material. We also wanted to keep the structure’s frame as light as possible to minimise foundation costs.

“We were then able to work around a 10.8m x 4m grid pattern which suited the upper level’s executive boxes as the column lines fall within the partition walls. On the ground floor, which has a larger footprint than the other floors an 8m grid is used as the area is an expo area and larger column free spaces were required.”

The 4m grid pattern is also advantageous for the first floor which will house a large hospitality suite able to accommodate 250 people, making it one of the largest function suites for weddings and parties in West Sussex. The floor space can also be divided into 12 separate breakout rooms with the aid of sliding partitions. The ground floor and first floor will have more than 1,000m² of potential exhibition or function space.

The upper or second floor level, again based around the same 4m grid pattern, will have 12 hospitality boxes offering panoramic views over the course. Above this level the stand will have a Kingspan composite roof which overhangs along the front elevation by 2.6m. 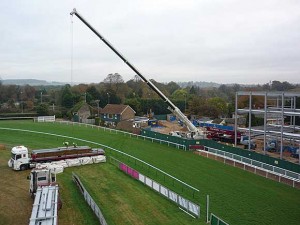 “Steel has a better finish as there is plenty of exposed galvanised steelwork for the upper balconies and roof, both of which cantilever out from the main structure,” says Mr Birbeck. “Steel lends itself to these architectural finishes.”

One end of the new stand has an attached control tower which will have two upper floors to accommodate course stewards and the press. The tower itself is formed by a series of 16m-high columns, while half way up a cantilever structure – containing the press and steward’s viewing gallery – juts out.

The tower presented a design challenge with its shape, which is driven by the need to provide floor space at high level, served by a single dedicated staircase.  A double cantilever with a horizontal backspan form the lower floor of the tower, while the two-storey upper area is connected by a vierendeel truss with horizontal and vertical bracing taking loads back to the main structure.

The vierendeel truss is formed by two larger 8m long girders which are spliced together form one large vertical frame. “A sort of cantilever off of another cantilever creates a suspended floor for the accommodation levels,” says Mr Burchnall.

Fontwell’s new grandstand is scheduled to open for the Ladies Evening race meeting in August.