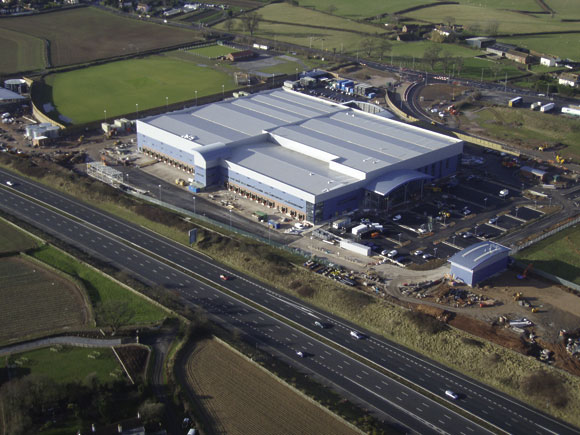 The dairy is situated adjacent to the M5, junction 24

Accommodating various processing facilities over four floors required some complex steelwork and a number of large lattice truss arrangements. Martin Cooper reports from a distribution centre with a difference.

Driving along the M5 motorway in Somerset, you can not fail to notice the giant new Robert Wiseman Dairies milk processing and distribution centre nearing completion close to Junction 24 at Bridgwater.

From a distance the huge structure looks like many other large steel warehouses that can be seen from the UK’s highways and by-ways. But inside it is a completely different story, as hidden behind the facade is a structurally complex building which required 6,000t of steel, including numerous heavy trusses, to support the various open-plan column-free areas that are spread out over four floors.

Housed within the vast structure are a number of milk processing facilities. “Everything will be done here except actually milking the cows,” explains Fred Handy, A & H Construction’s Project Manager.

Inside the facility there is a raw milk storage space; a milk pasteurisation unit; a blow moulding plant for bottle production; a large bottle filling hall; a fully automated bottle store area; and packaged milk production and distribution chill stores.

Although the structure has a large footprint many of the dairy’s function areas are still located, one on top of another, on various floors. This is where structural engineering expertise came to the fore, as many of the processing areas need a large column-free area which required a myriad of trusses to be located throughout the building. 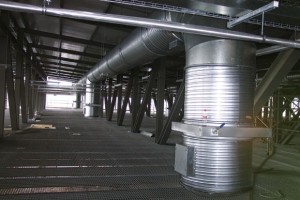 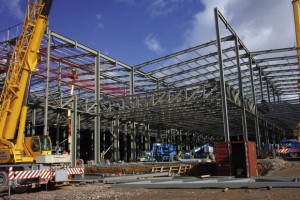 A number of structural solutions were used for the frame 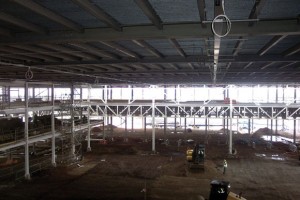 Large open column-free areas are a feature of all levels

Jim McLaren, Project Manager for Kiloh Associates – the company which designed the structure’s frame and foundations – points out that finding the right software package was a key element in the initial stages of the job.

“The frame is very complex, with various loadings over the four working levels of the building,” he says. “We started off designing the columns and beams in one programme and then had to design many other elements manually as no package was completely suitable.”

Once the design team had come to grips with the complexity of the frame the various loadings also had to be worked out.

“There isn’t a blanket loading throughout the structure, that would have been very easy and not economical,” says Mr McLaren.

The solution was for Kiloh Associates to liaise with the different contractors who were to install the dairy’s equipment. All of the machinery and storage will generate a unique weight and from the information supplied by the client’s specialist contractors, the building’s various loadings were then calculated.

The largest column-free area is the bottle filling hall on the ground floor which measures 57.5m x 64m and occupies the full height of the structure. To accommodate this space a series of lattice girder trusses were installed. These sections are each 4.6m deep and 57.5m long, and were brought to site in two pieces and then bolted together.

Above the filling hall, and housed within the truss layout to make use of available space, is an attic floor containing air-handling equipment and services. All of the associated pipework is supported above the floor to aid access for maintenance and more than 200t of steel has been installed to support these pipes and the open grid floor.

Because of the complex arrangement of the structure, a number of structural solutions were used. “We were able to use conventional beam and stick in some areas, others required large lattice trusses and the roof is a portal frame construction,” explains Mr McLaren.

Stability for the structure is predominantly provided by bracing located along the perimeter and internal walls using the major gridlines. Consequently, all of the internal columns, picking up the trusses or otherwise, are also taking much of the structure’s stability.

Large trusses have also been installed at a number of other locations. “Working out the steelwork and trusses to cater for the different functions is a bit like 3D chess,” explains Mr Handy. “Some trusses are even supported by other trusses where they criss-cross each other.”

The floor between the trolley storage area and the chiller area also required 2m-deep trusses to accommodate the two column-free areas. “Conveniently, all the required services for these areas run inside the trusses,” explains Mr Handy.

Meanwhile, the more conventional beam and column configuration was used for the bottle moulding area, albeit with some substantial roof beams to take heavy loadings from above. “This is another large open area,” says Mr Handy.

On a project as complex as this one, teamwork and cooperation are vital. “Key to our success was our weekly sub-contractors meetings, without these we wouldn’t be where we are now,” sums up Mr Handy.

The use of steel has also played an integral role in the quick construction programme needed for this job. Wiseman wanted to start milk production by December 2007, and this was primarily achieved because the frame was completed in less than four months.

Although production has already begun at the Bridgwater dairy, it will be some months before it reaches its capacity production.

The entire steel frame was erected in less than four months