Posted on July 1, 2002 by NSC2 in Certificate of Merit, SSDA Awards 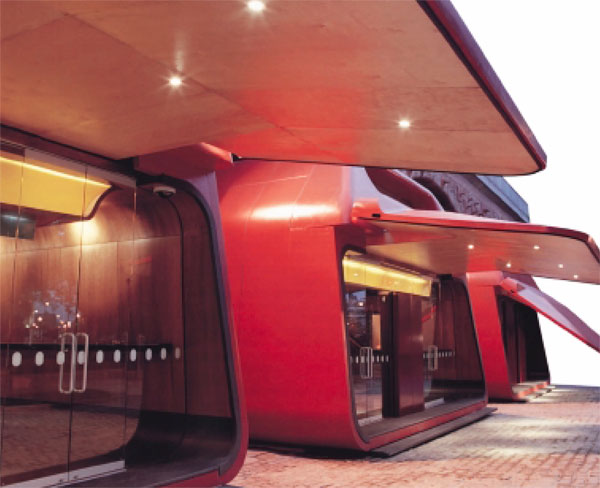 Union North was briefed to develop a set of four railway arches as a bar/club/pavement café, replacing existing retail and light industrial units. Several issues were key to the direction of the design development:

The above constraints could not help but drive the design in the direction of four identical massproduced units each in turn assembled from repeating prefabricated segments. From this starting point key design elements fall into place inevitably: rounded profiles blur floor, wall and roof into a unified all-enveloping skin; the effective legal limit on the upper floor area generates the characteristic section profile of the units fitting the surrounding arch closely at low level, tapering in above with the reduction in floor area; the front flip-up doors double as canopy and security shutter; airlock links connect the pods together through existing jack arches and the narrow alley to the rear of the viaduct becomes a connecting service void. 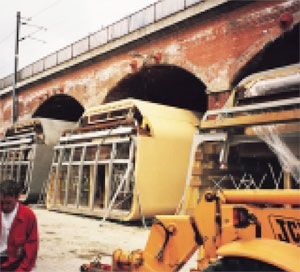 An industrial aesthetic suggests industrial building techniques and the pods were factory prefabricated in two metre segments, that dimension being set by the available size of mild steel plate and the maximum volume of motorway loads. Each segment was fully welded and painted in Liverpool before trucking to site for rapid assembly by industrial forklift, necessitated by Railtrack’s restrictions regarding the use of cranes near their track installations. Completed shells were then coated internally with sprayed insulating foam.

Internally the tight fit integrated design philosophy is continued, organically shaped tubes of space snugly interlock with one another, servicing and structure disappear into the intersitial spaces between their wraparound plywood skins. Visible fittings were eliminated or reduced to simple openings in the plywood lining: ventilation grilles are perforations in an otherwise continuous skin; lighting is by concealed fluorescents in coloured voids sunk into the structural depth of the pod and washbasins reduce the slots concealing stainless steel troughs. 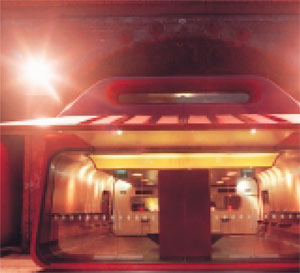 The door counterweight and opening mechanism are concealed in a void inside the glassfibre nose. Under licensing conditions a protected route was required from upper floor areas direct to the exterior.

This was articulated as a sculpted tube sweeping down through the ceiling and out through the glazed external screen terminating in clam-shell exit doors. Access doors to the stairs fold back into flush recesses on alarmed magnetic catches.

There are thousands of railway arches in the UK, and they are put to many uses. This innovative concept, of a steel shell providing surprisingly good space which is secure, whilst affording easy access to the arch for inspection and maintenance, can have wide application.