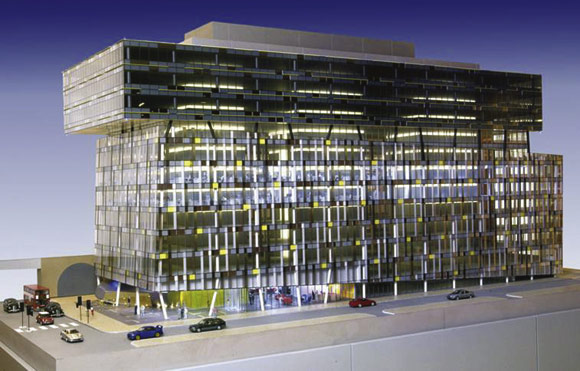 A new London office development in Southwark challenges some of the preconceptions of what a building should look like and presented a few challenges to the structural design team, as David Fowler discovered.

A framed letter from a worried member of the public hangs in the site office of the new Palestra development near Waterloo in London.

The writer, probably one of the thousands of commuters who pass the Southwark site every day travelling into or out of Charing Cross, wanted to alert the contractor to a serious problem of workmanship which appeared to be afflicting the structure. The ground floor columns, the writer pointed out, were drastically out of plumb, to an extent easily visible to the most casual observer.

However disconcerting this may at first appear, though, the raked columns at the first and seventh storeys of this new speculative office development are intentional. And what architect Will Alsop describes as ‘dancing’ columns are by no means the building’s most dramatic feature. 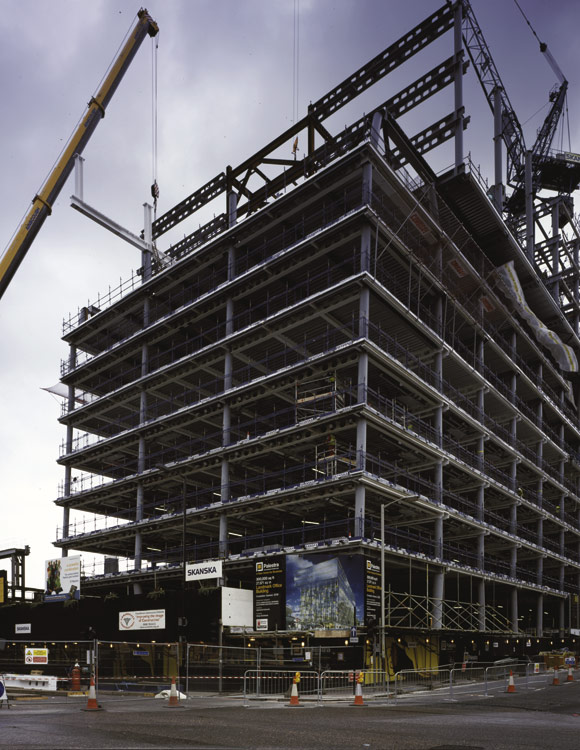 Lifting in the 9m cantilevers required a partial road closure 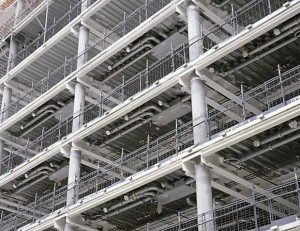 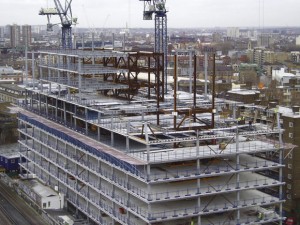 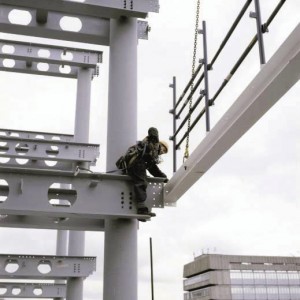 Installing the steelwork for the cantilever over Blackfriars Road 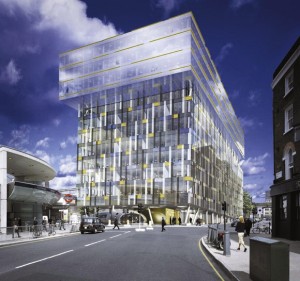 Artist impression of the Palestra

There is also the external treatment, which divides the 12-storey building into two masses, one box on top of another. The upper box, consisting of the top three stories, cantilevers 1.5m beyond the lower one on three sides – and by a huge 9m, overhanging Blackfriars Road, on the fourth.

Then there is the curtain walling, the bottom edge of which is on a slant so that it rises from ground level at one end of the building to a height of two storeys at the other.

The £68M, 37,098m² gross project, which began on site in January last year, is being developed by Blackfriars Investments and Royal London Asset Management, with Skanska as main contractor. Steelwork contractor is William Hare.

Its unusual features are not simply whims of the architect. The 9m cantilever arises from moving the entire top three storeys over by one grid square for planning reasons, to avoid overshadowing nearby residential properties. The extra 1.5m all round the top storeys recognises the fact that space on upper floors is more desirable and commands a premium rent.

The edge of the curtain walling rises to provide public space and an area for a coffee bar at the corner of the building facing the pedestrian route from Southwark tube station to the Tate Modern.

All this provided a number of challenges for the structural design team, Buro Happold. The dancing columns lean over at varying angles and in two directions, inducing horizontal forces at the top and bottom of each. “We paired them so one leaning one way is balanced by one leaning the opposite way somewhere else,” says Buro Happold Partner Stephen Brown. The balancing columns are not placed adjacent to each other so that this is not obvious, he adds. But even though this balances the horizontal forces, a twist is still imparted into the floor slab.

“Understanding the twist put into the building was an important part of the design,” says Mr Brown. “Both the ground and first floors have to work quite hard to hold the columns.”

Between the first to the seventh floors everything remains vertical. Then there is another tier of two-storey dancing columns, compounded by the fact that at the ninth floor the grid changes from a 10m x 7.5m module to 12m x 7.5m because of the 1.5m cantilever all round. “None of the columns meet the columns above at all,” says Mr Brown. Moreover, the whole ninth floor is offset by 7.5m to the west. “It causes an interesting twist at the seventh level, plus the overturning effect of the cantilever.”

The overturning force induced by the 9m cantilever is considerable: 20 times the average wind load, to be transferred into the stair and lift cores, which use conventional steel K-braced frames.

Buro Happold Associate Andrew Lacey adds: “The 9m cantilever is more or less plugged on to the side of the building. The architect wouldn’t allow any visible diagonal bracing, and planning restrictions on the height prevented any structure to suspend it from above roof level.”

A solution which would work within the existing floor depths had to be devised, and the result is a fully fixed Vierendeel girder from the ninth to the 12th floors, tied back to the primary core. It is made up of very substantial plate girders with flanges typically made from 70–80mm plate.

“There’s as much steel in the ninth floor as in the third to sixth put together,” says Mr Lacey. This tends to obscure the fact that the basic steel frame is otherwise very efficient. Even with the cantilever, the weight of steel is a respectable 75kg/m².

Buildability has been a primary concern on the project, given that the site is bounded by roads, the main railway line from Charing Cross and the Jubilee Line underground. “Because of the railway, roads and tube, the building is designed around understanding the contractor’s problems,” says Mr Brown. Any crane lift of more than 8.5 tonnes is deemed a ‘controlled lift’ requiring special supervision by Network Rail personnel, so the building is designed to be constructed without exceeding this limit.

The composite steel columns are designed to be structurally efficient, light to lift, and easy to erect. Column splices need just four bolts. The 508mm hot finished circular hollow sections are grouted with concrete after construction, providing two hours fire resistance. The steel section alone is enough to cope with dead loads, however, so erection of the steel frame can continue leaving the grouting to be done later and taking it off the critical path.

Unless high winds intervene to prevent the cantilever steel being lifted into place, steelwork erection was on target for completion on schedule in March, with overall completion scheduled for summer 2006. The finished building will be ideally placed to whet the appetite of fans of modern design on their way to the Tate Modern – provided they aren’t too nonplussed by the dancing columns. 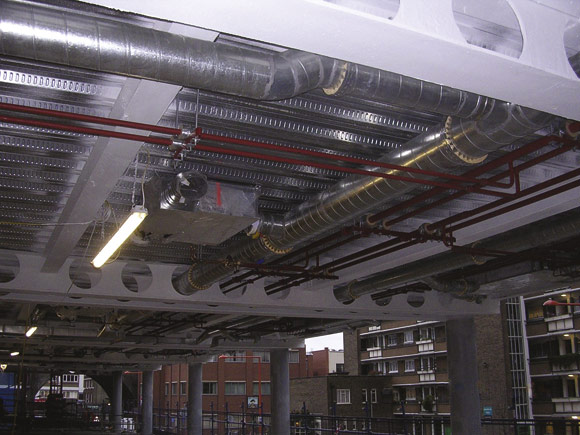 Enlarged holes in the web made service installation easier

One of the factors contributing to Palestra’s structural efficiency is the use of cellular beams for the floors, acting compositely with the insitu concrete floor slabs. Rather than the floors resting on the top flange of the beam, as is usual, the flange is cast into the slab. This results in more effective use of the steel, gives greater load carrying capacity in the same structural depth, and removes the need for shear studs. 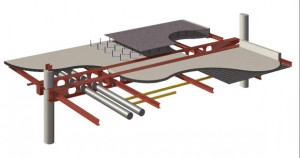 3D CAD was used to model structure and services

In a fire, it reduces the ratio of the heated perimeter of the beam to its section area. This means that a single coat of intumescent paint applied off site, rather than two, can be used. This costs roughly the same as boarding, which is more easily damaged and less attractive aesthetically.

Also, because the depth of the cell beam is greater, the holes in the web through which services pass can be made bigger. In this case, this meant an increase from about 350mm to 430mm in the openings, allowing more room for the ducts and associated fire protection and also the operative’s hands, making for a quicker, more efficient service installation. “That’s very important – it’s real money in a speculative building,” says Mr Brown.

A great deal of innovative thought has gone into the composite columns and their connections with the floor beams. Composite construction, using circular hollow section columns filled with concrete, is efficient both structurally and from a fire resistance point of view. The concrete acts as a heat sink to conduct heat away from the fire. Because the concrete is confined within the steel tube, it cannot fail by bursting (which is why this approach is used in design to resist earthquakes). The overall column size is kept compact and no external fire protection is needed.

To achieve a two-hour fire rating, Eurocode 4 calls for the concrete to be reinforced. Instead, Buro Happold provided the same area of steel using another CHS (273mm diameter in this case) within the outer one. “This makes life easier for the steelwork contractor, as there’s no reinforcement to worry about,” says Buro Happold partner Stephen Brown.

Steelwork contractor William Hare supplied the columns to site in three storey lengths, as one unit welded to a common base plate.

The whole cruciform beam/column connection is then cast into the concrete floor. But because it transfers no moment into the column, the floor beams can be designed as continuous, making them more efficient and allowing them to be spliced away from the columns at the point of minimum bending moment.

The columns are grouted later in lifts of three storeys by filling with self-compacting grout, which requires around 2m³ for each column.