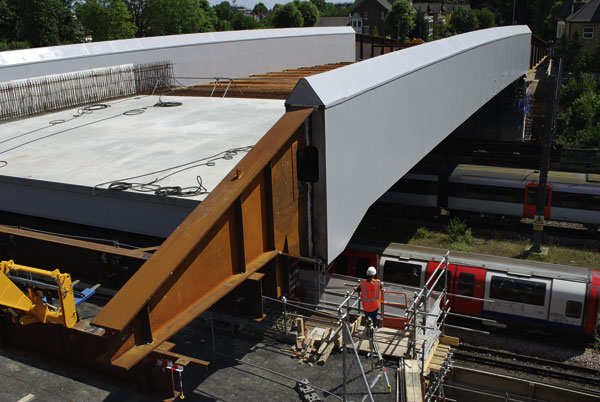 The installation of the South Bridge, part of the Hangar Lane Bridges Replacement scheme in west London, has been achieved using a launching method saving the contractor, Vinci Construction, five valuable days.

Due to site constraints, the single span steel composite superstructure was launched over rail lines using Self Propelled Modular Transporters (SPMTs). This avoided the need to close the busy North Circular Road for five days to allow a crane to be erected for a traditional lifting procedure.

Vinci specified that the 45m long box girder bridge be constructed on site almost perpendicular to the launch direction. Two sets of SPMTs were positioned beneath the superstructure which included nose and tail temporary works. During a three hour rail possession, the SPMTs enabled the South Bridge to be lifted and rotated into its correct alignment and then launched over the railway lines.

The total load launched was 1,084t which included 189t of reinforced concrete and 474t of steel.

The steelwork contractor for the project was Cleveland Bridge.