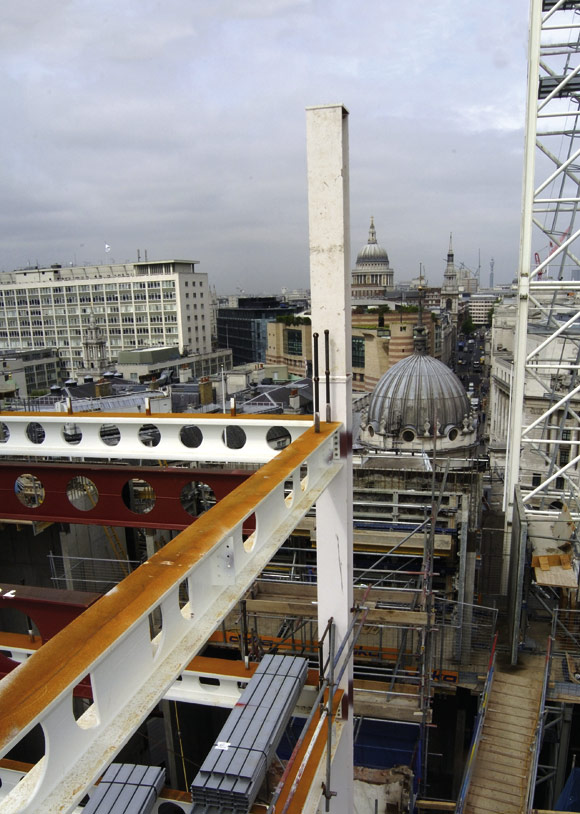 The former London headquarters of Lloyds Bank is undergoing redevelopment involving retention of the original facade with a new steel framed structure being constructed within. Martin Cooper reports.

Built in the late 1920s, 71 Lombard Street in the City of London was until 2002 the headquarters of Lloyds TSB Bank. However, having relocated to new premises at nearby Gresham Street, and as part of the deal, Lloyds sold the historic site to developer IVG Asticus Real Estate, which is turning it into a prestigious business location offering 125,000 ft sq of office space and 40,000 sq ft of retail space.

The imposing Grade II listed six-storey building sits on a triangular wedge between Lombard Street and Cornhill, near to where both thoroughfares converge on the Bank intersection. A small segment of the plot was taken up by another building – 13-14 Cornhill – which has recently been demolished behind a retained facade, creating a larger project footprint. The site address has now taken on this name and is officially rebranded as 14 Cornhill.

The City of London location has presented some logistical challenges. John Bray, Project Manager for ISG explains: “All deliveries to site have to be planned well in advance as the surrounding streets are extremely busy during peak hours.”

Lombard Street can be closed to traffic between 10am and 4pm only, but this road is too narrow to accept some loads. Consequently, some of the steel trusses, have to be craned into site from Cornhill. “Here we can close one lane to traffic, but only at night,” Mr Bray explains.

Matt Mason, IVG’s Project Director describes the project as a re-development within an existing facade. Put simply, the Lombard Street facade is being retained as are all the adjoining floors to a depth of one bay. However, behind this a major demolition job has also been undertaken, including the leveling of 13-14 Cornhill. What’s left of the original building will be incorporated into a new build section and then enlarged to eight storeys. 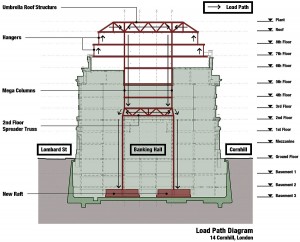 The new levels are hung from the steel roof 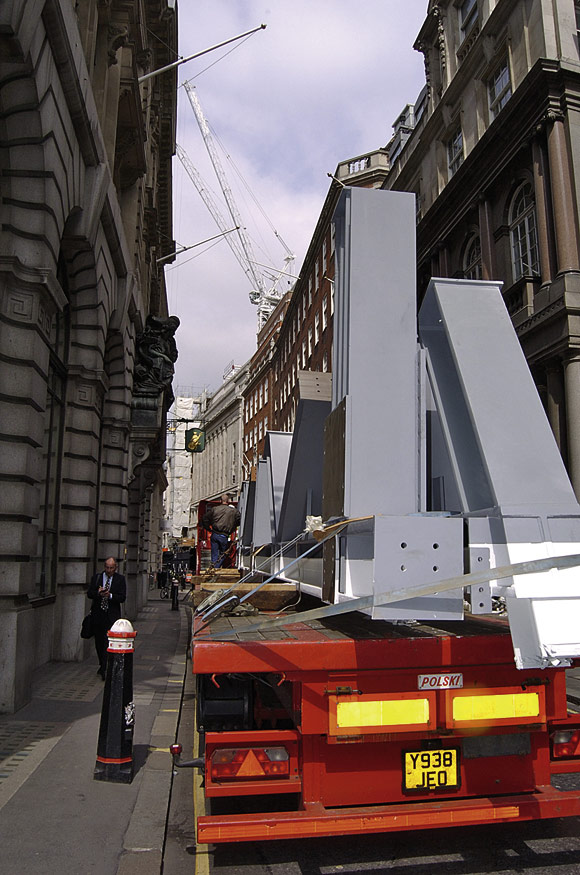 Steel being delivered to the site 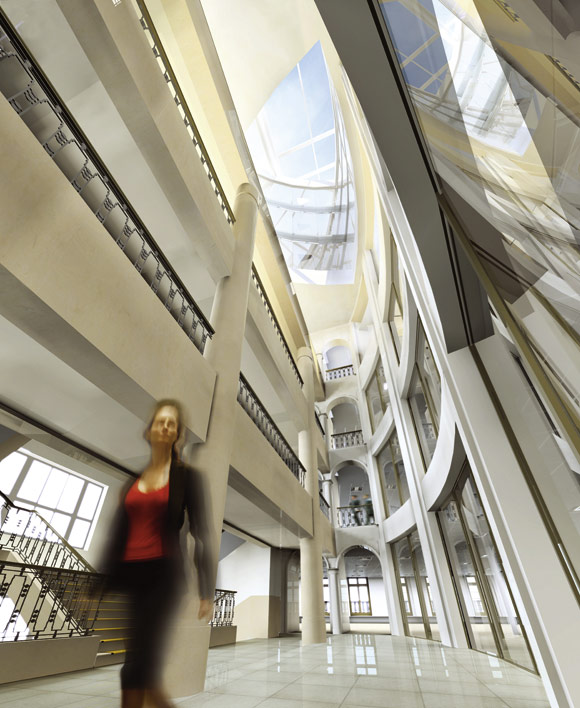 Areas to be retained consist of the ground floor listed banking hall, the listed imperial main staircase and wood-paneled meeting rooms on the fifth floor. Mr Mason says the banking hall will either be let as a retail arcade or restaurant/dining environment. The hall also includes a mezzanine floor which overlooks the hall on two sides.

The original Lloyds building is a steel framed edifice and the new and bigger structure is also being predominantly constructed with steel. However, the entire construction process is quite complicated to say the least. To summarise: the developers want to create a viable modern office and a significant increase in usable space was required. So two new floors will be added to the building, and to avoid any damage to existing floors six mega-columns have been inserted that support a number of steel trusses at roof level from which the new floors will then be suspended.

“Much of the building is upside down in a structural sense with loads being carried up the building to long span, storey deep roof trusses before they are taken back down the mega-columns,” Eddie Jump, Project Associate of whitbybird explains.

“Understanding the existing structure and steelwork, and then combining this with the new steelwork has been one of the main challenges of the project,” Mr Bray says.

Floor area will be further increased by filling in the lightwell above the banking hall. Meanwhile, between the first and fourth levels, wide brick-clad low-grade steel columns are being replaced with slim solid steel columns to create a more open-plan environment.

“The only viable method of in-filling the lightwell was by using steel beams,” Mr Jump says. He comments the scheme’s principle is to keep as much of the original building as possible. To this end steel was deemed to be the ideal material.

“The two new floors are basically hung from a layout of trusses in the form of a giant umbrella, this wouldn’t have worked without using steel,” Mr Jump adds. “The weight savings of steel are very important.”

All steelwork for the project is being supplied and erected by Graham Wood Structural. Gregor Hunter, Operations Director for Graham Wood estimates that 900t will be used on the main structure with a further 300t for the construction of the new section on Cornhill.

Mr Hunter says the process of inserting the lower levels of the 50m-high mega-columns was a very complicated job, as they were craned into the building and dropped through holes in existing storeys in sectional 11m lengths.

Two of the six mega-columns rise through the old lift shaft and are UC 356mm x 402mm, while the other four fabricated plate units measure 300mm x 300mm. All start at sub-basement level, however four mega-columns – the ones not in the old lift shaft – change configuration at level 2 of the building. Up to this point they are in pairs, which were inserted either side of the existing columns. Once the mega-columns were in place and before the transfer beams were inserted, the old columns above had to be removed. “This kind of procedure isn’t unknown, but it is very complicated, involving our design and installation of temporary works to support the existing third to sixth floors,” Mr Hunter explains.

Mr Jump says the construction of two extra floors literally rests on the mega-columns. “The retained banking hall slightly constrains these columns,” he says. “So, after by-passing the hall at level 2, they slightly kick-in and are replaced by single mega-columns.”

At level 2, a transfer beam rests on the columns and this in turn supports a truss. From here the new single mega-columns reach up to the new roof above level 8. On top of the columns at this height are another series of very large trusses which span over the existing wings of the building and the two new floors are suspended from these.

The large trusses vary in size and depth, with the largest central unit weighing 15t and 13t at the wings. Mr Hunter says that 240t of steel is being supplied for trusses alone.

The new eight storey building not only covers the old buildings’ floor space but also incorporates a new steel frame structure which replaced the demolished Cornhill building. The new floorplan also consists of the in-filled lightwell from level 2 to the level 6. To complete this in-fill Graham Wood Structural installed a number of Westok 9t 15m-long beams overlaid with metal decking.

Another interesting aspect of the project is the new sloping rear glass elevation which is also suspended from the roof trusses. To form this a number of raking 254 x 254 x 89 columns are hung from the overhead trusses.

Mr Jump says the design of this elevation, that hangs over six entire floors overlooking Change Alley, had to take into consideration any structural movement. “The complete elevation is steel framed and clad with glass. To get the cladding designed we had to get a key understanding of the building’s movement.”

In order to increase the floorplan for the new building, Graham Wood is removing 50 existing columns. The old units are 1 ft sq brick-clad columns and are being replaced with steel columns, to create a ‘visual feel of more space’. These columns extend from the first floor to the underside of level 5.

The columns to be replaced are in the old structures two retained wings, and Mr Hunter says more than 30t of temporary steelwork is being installed for this part of the project.

“This is one of the biggest challenges of the whole project,” Mr Jump sums up. “The temporary works, such as jacks and props, are holding the existing building up as the columns are replaced. This is a key procedure of the project,” Mr Jump adds.

The 14 Cornhill project is scheduled for completion by the third quarter of 2007. As IVG says, a modern steel-framed classic in the heart of The City will have been created from an existing structure.