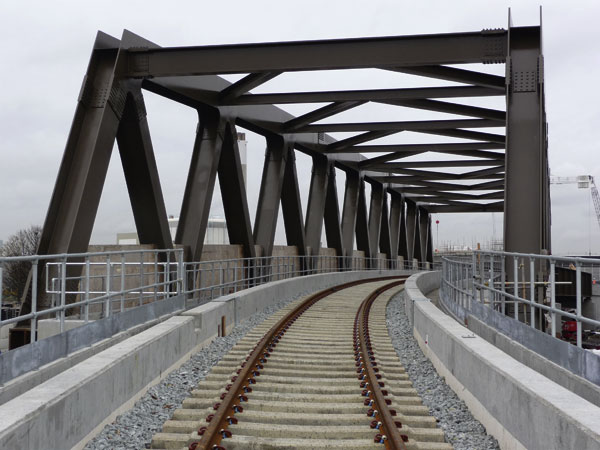 Pre-assembling a 75m-long rail bridge off-site, transporting it to its final position and then lowering it into place was the solution to a very difficult logistical challenge on the East London Line.

The recently opened East London Line is a new overground rail service which connects north and south London via the Thames Tunnel, an historic tunnel initially opened in the 1830s.

This new rail line crosses numerous obstacles such as small rivers, roads and a number of other railway lines, one of which at New Cross called for an innovative steel solution to negate a challenging logistical problem.

The single track East London Line crosses seven mainline railway lines at New Cross, and a 75m-long warren truss structure was chosen as the best option.  Designed by Scott Wilson, the structure consists of 690t of steelwork comprising of eight longitudinal main girder boom sections, each 20m long and weighing between 20t and 25t, and a total of 37 crossbeams, 10m long and weighing 3t each.

Erecting the structure, quickly and safely over the Network Rail lines was the challenge, especially as a traditional erection method was ruled out because of time constraints.

“Craning the whole structure into position even without the concrete deck was ruled out due to site restrictions and size of crane required,” says Chris Doyle, Scott Wilson Project Engineer.

As time was extremely important because rail possessions were only available during a weekend, pre-assembling the deck off-site was the only feasible method. “We decided to erect the bridge on a nearby plot and then transport it to site via self-propelled modular transporters and then de-jack the structure into place,” explains Richard Selby, Mabey Bridge Head of Projects.

Initially the bridge steelwork was trial erected at Mabey Bridge’s fabrication works and the deck crossbeams were machined to length ensuring the correct fit within the end plate connections. Steelwork was then delivered to site and the members forming the deck and the top chord of the truss were assembled and the whole structure fully bolted.

The bridge’s deck was then cast and once it had achieved sufficient strength, the structure was jacked up approximately 6m to allow the self-propelled modular transporters to be positioned beneath the deck.

The distance covered from the assembly point to the bridge’s final position was about 100m. In order to transport the structure across existing railway lines it was necessary to cover the tracks with a protective covering. Once the bridge structure was in place, it was de-jacked and lowered into position over the abutments.

The entire procedure was successfully achieved during a weekend rail possession ensuring no disruption was caused to the rail network.

In summary, the judges say all the challenges of constructing a large bridge over a key rail route, with numerous site constraints and to a very tight timetable, were successfully addressed here.