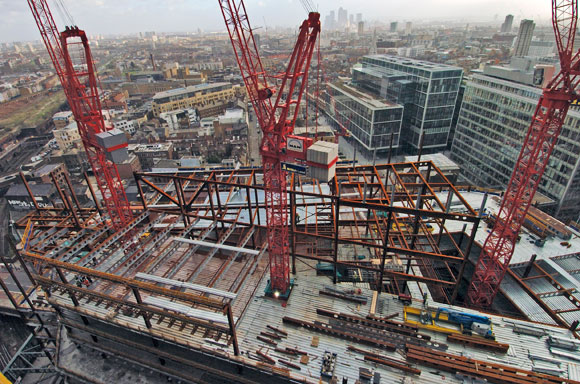 Six tower cranes have been used by William Hare, including two jump cranes per building

Economic conditions have become good again for big speculative developments in London and along Bishopsgate, close to the capital’s financial heart, the latest high rise structure is progressing on schedule. Steelwork contractor William Hare is now nearing the end of its part in the Broadgate Tower and 201 Bishopsgate development – an impressive steel construction project in many ways.

Some heavy structural engineering has been employed at the base of both buildings to allow them to be built over mainline rail tracks just north of Liverpool Street Station and equally impressive work has followed as the steel frames have risen. Both buildings are now nearing full height – 35 storeys in the Broadgate Tower and 12 in the adjacent 201 Bishopsgate. When Hare’s work is completed a total of 13,000t of steelwork will have been fabricated at the company’s Yorkshire yards, transported to central London and erected within a site no bigger than the buildings’ footprints.

At peak production late last year, Hare’s site team was taking delivery of 120t of steelwork every day, unloading it along Primrose Street to the south for Broadgate Tower and in the ‘pit-lane’ established within the columns of 201 Bishopsgate for receiving materials for that building. 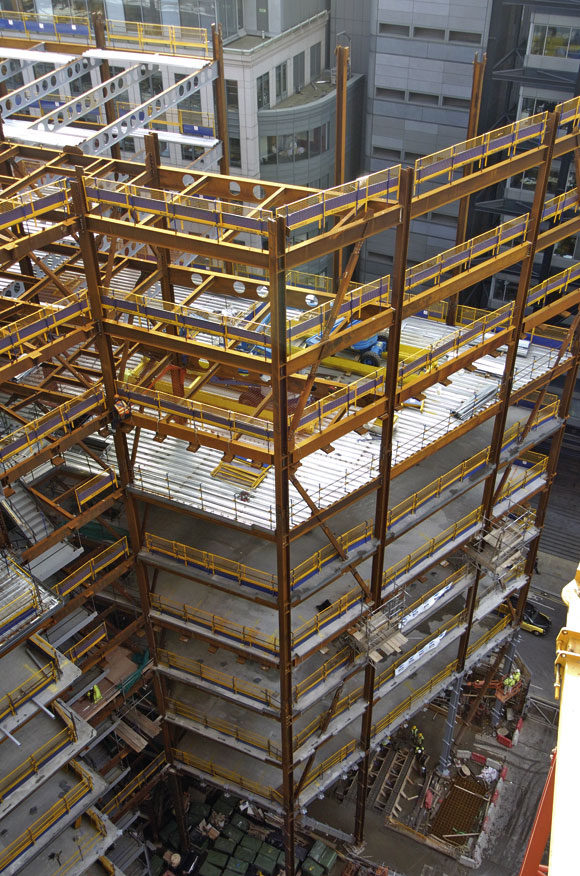 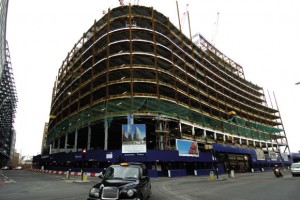 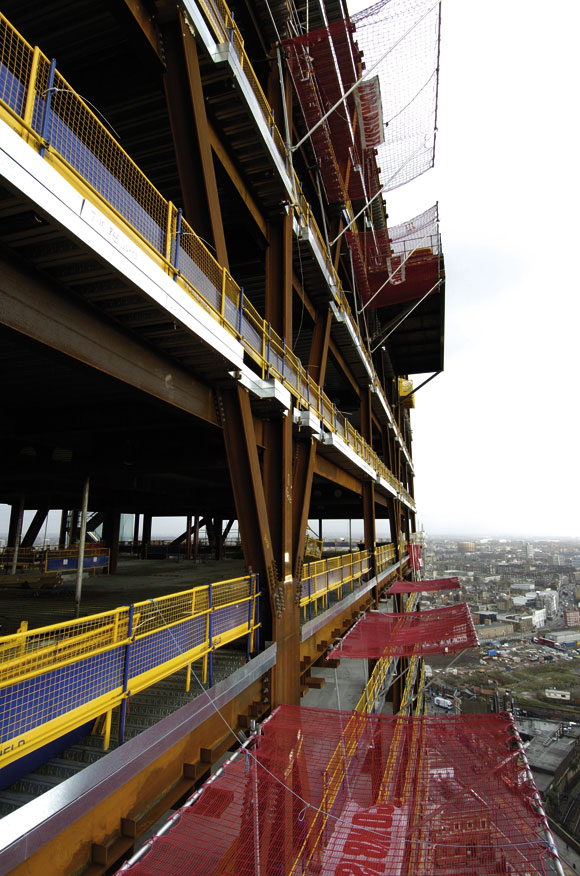 “It feels not long ago since we were planning the delivery programme and doing trial runs to check the logistics would work with the size of the lorry loads,” says Hare’s London Director Nick Day. “Routes into the city and traffic arrangements were all agreed with the Corporation of London, Transport for London (TfL) and City Police. Overall everything has gone well. Loads were seldom late and we have generally matched or exceeded our planned piece rate (of steel erection).”

It is now two years since the steelwork under way at Bishopsgate was being planned, but Hare’s involvement in the project dates back to 2000 when the firm priced up a smaller development for the same site. Developer British Land shelved that scheme due to market conditions. A large 2.5m deep, twin decked, steel raft was built by Bovis Lend Lease though to create a safe working platform over the Liverpool Street tracks.

The site created by the raft lay dormant until 2004 when British Land and its development manager M3 Consulting appointed Bovis Lend Lease as construction manager and Hare was awarded a contract for alterations and extensions to the steel raft (see story below). Market conditions had come good again and the plans changed and expanded to include the Broadgate Tower and 201 Bishopsgate buildings, designed by the American architect and structural engineer Skidmore Owings & Merrill (SOM).

The design concept now also included large unobstructed floor spaces and lobbies, aesthetic sharp lines and steel frames with structural elements exposed including the main steel bracing. The new Broadgate Tower footprint extends beyond the limit of the raft, which had to be extended with six massive A-frames included in the design to transfer the weight of the tower into its foundations.

“This was an engineering feat in itself, just building up to the fifth floor. The new Broadgate Tower footprint required careful load transfer into the existing raft and this has been achieved by the design of the A-frames, each consisting of two 20t box girders of 40mm plate steel. Before these were fully erected, most of what could be seen on site was temporary steelwork for supporting the A-frames and floors up to level five,” Mr Day says.

Hare was awarded the steelwork contract for both buildings – around 8,000t in the Broadgate Tower and 5,000t in 201 Bishopsgate – in December 2005, two months after starting work on the 600t of extra raft steel. Erection of the main steelwork got under way in May last year, with three tower cranes per building including two jump cranes inside the tower.

“It was quite challenging, coordinating the crane jumps,” Mr Day says. “The cranes were free standing up to floor 11 and then were jumped every sixth floor, but only after all of the frame erected at that point was fully bolted and welded. The majority of the steel fixing has been carried out from three MEWPs (mobile elevated work platform) on each building, lifted up every three floors.”

Steel erection has progressed smoothly since May last year, Mr Day says, helped by planning that “modularised” the steel pieces where possible to reduce pressure on the cranes. Also, secondary steel was engineered in the early days of the project with service holes and lift shaft and, where possible, cladding brackets pre fixed to the steel when it arrived on site. “Plus, the decision to site-weld the main nodes in the external frame has helped with the required building tolerances,” Mr Day adds.

Hare’s 160 strong workforce of steel erectors, deck fixers and welders (it also has a management team of 20 on site) is due to finish steel erection and floor decking by Spring this year – all decking has been cut off site to minimise noise in the vicinity and Hare’s own proprietary edge protection system has been used. Concreting of the composite floors, fire protection, dry wall partitions and cladding, services and just about all of the project’s other trades are now following up behind erection of the two steel frames.

Column heights have been fabricated at three storeys to further reduce pressure on the cranes and each of the main signature diagonal bracing members in the Broadgate Tower consists of two 13.5m welded sections. Clear floor spaces in both the tower and 201 building have been achieved with 20m spans and 12m bays, and beam depths of 500-600mm are typical – Fabsec beams in 201 Bishopsgate and plated girders in the Broadgate Tower. It all adds up to around 300 pieces of steel per floor in the tower and about twice that number in each floor of 201 Bishopsgate.

“It has all fitted together well. We have had to work closely with the structural engineer SOM and the cladding contractor Josef Gartner to make sure all of the steelwork and fixings fit and we have had to interface with a lot of other trades,” says Mr Day. “Overall this is a very integrated project, so far achieving a smooth follow on of work. 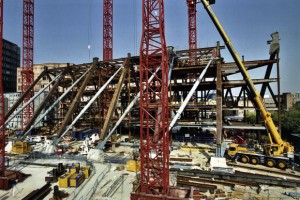 The raft over the Liverpool Street rail tracks – and now beneath the Broadgate Tower and 201 Bishopsgate – is a 2.5m deep structure of two twin steel framed decks on piled foundations with precast planks and concrete topping. William Hare’s job on first arrival, through a separate contract to the main building steelwork, was to cut through the 300mm top slab and expose the steelwork for adding another 600t of steel for strengthening and extending the raft.

The 201 Bishopsgate frame fits on the original raft structure, built in 1999, but the Broadgate Tower extends further out, which necessitated an extension to the raft and the six massive steel A-frames for distributing the tower loads evenly over the raft and down into its piled foundations.

“Eight new piles from 3m diameter at the top to 9m in diameter at the bottom were machine dug down to 20m in depth to form the extended foundations,” says Bovis Lend Lease Project Manager Robert Dudley. “The steel trusses of the raft were then extended out on the west side by William Hare with new 2.5m deep girders. Twelve massive steel and concrete node pieces connect the base of the A-frames to the old and new piles.” 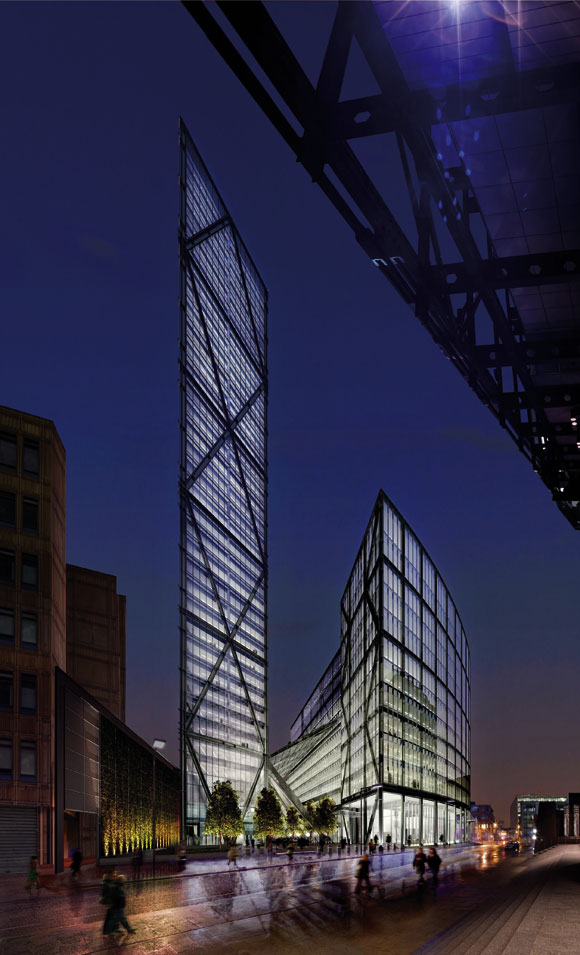 Aesthetically and structurally, the design of the 35 storey Broadgate Tower and the adjacent 12 storey 201 Bishopsgate building are very much Skidmore Owings & Merrill (SOM) productions, similar in nature to high rise SOM buildings in Boston and Chicago. Each of the London buildings is steel framed and clad in stainless steel and glass, with the SOM signature of exposed structural members and angles contributing to a ‘sharp’ visual effect.

The Broadgate Tower is a parallelogram in plan, whereas 201 Bishopsgate features concave and convex elevations, as well as one straight side adjacent to the tower. Both buildings gain their stiffness from a combination of steel bracing and lift shafts, although the massive steel cross members contribute the majority of the tower’s robustness, the lift core steelwork being suspended from the main frame.