Despite considerable value engineering, there is still 1,000t of steelwork in the new structure

Value engineering has contributed to a reduction in steel during construction of a large city centre development in the East Midlands, as Margo Cole discovered.

For the last 30 years Nottingham has seen little in the way of major retail development, but that is set to change later this year with completion of Trinity Square, a large mixed-use development in the heart of the city. The scheme is not a typical shopping centre, but two city blocks that will house 17,650m² of shops and restaurants, 462 car park spaces and 700 student flats. One block will be 10 storeys in height, and the other six.

The larger of the two, the North block, will have retail and leisure space in the basement, ground and first floors. Above this will be two levels of car parking, topped with five floors containing 500 student flats. The South block also contains three levels of retail and commercial space, and 200 student flats on the two upper floors. 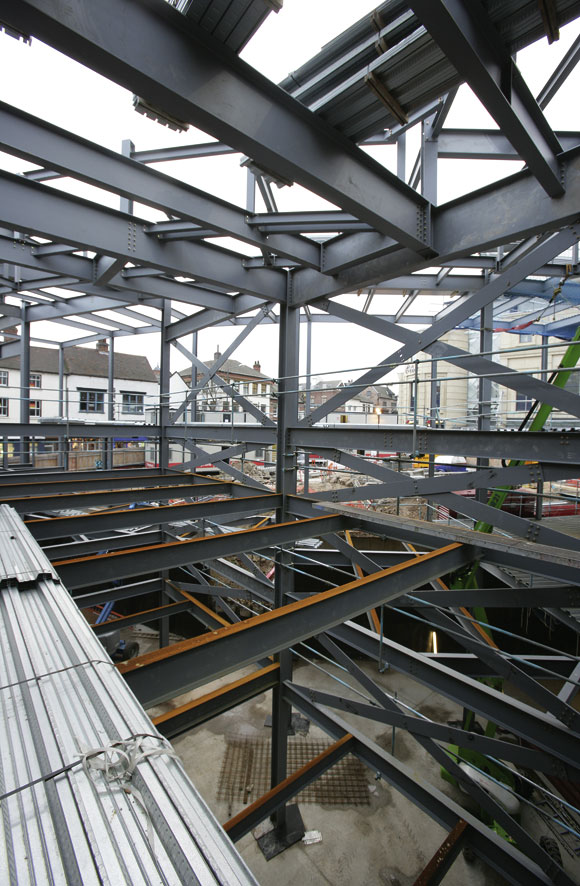 Floor slabs are composite steel deck and in situ concrete 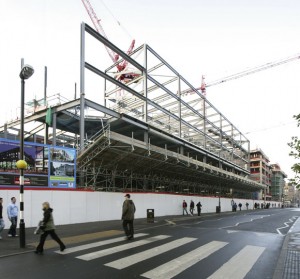 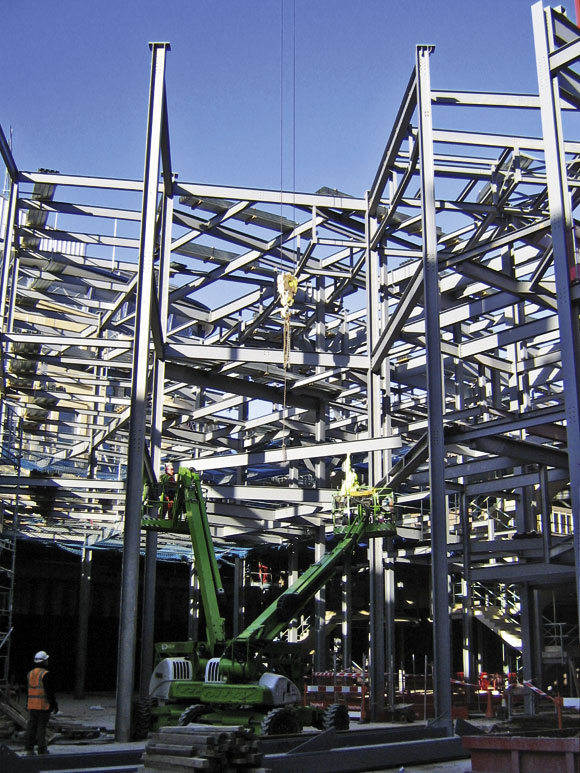 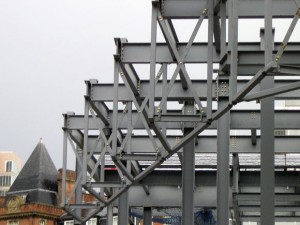 Stepped, cantilevered steel will hold feature glass and stainless steel cladding at one corner of the building

Main contractor Shepherd Construction is using two different forms of construction for the £47M scheme: in situ concrete for the North block and steel frame for the South.

The scheme’s developer Helical Bar wanted large, open floor spaces on the lower levels to attract potential retailers. While this makes good commercial sense, it set the scheme’s structural engineer, BWB Consulting, the challenge of finding a way to take the loads from the upper floors down to ground level when the structural grids do not line up.

This has been achieved by installing a transfer slab at level two in the North block and considerable support steel at the same level – immediately above the retail space – in the South block. Here, the apartments are being built on a standard 3m grid, whereas the retail space below is on an 8m x 7.5m grid.

This is just one of many complexities in the structural steel frame. The building has three straight sides that are not square to each other, with the fourth side a curved façade that forms the backdrop to a new public piazza. One corner of the building has a stainless steel and glass overhang feature that cantilevers over the two fully glazed floors below, resulting in structural columns having to spring from cantilevered beams.

“It’s a pretty complex building,” admits Shepherd’s Project Manager, Malcolm King. “When we looked at the drawings we just thought it was a lot of steel, but what you’ve actually got is a simple grid for two thirds of it, and then you have to incorporate this curved piazza area into this square grid. You also have the challenge of stepping the building back.”

The design also has to deal with a level change of 3m from west to east. “The basement is flat,” explains Mr King, “But when it comes to ground floor level, the client was looking to meet the existing external ground level for the shops, so there are lots of steps and joggles in the ground floor.”

He says that, during the design process, “the transition from concept to real thing was quite interesting”. Detailed design resulted in an extra 300t of steel being required compared to initial estimates. Shepherd, BWB and steelwork contractor DA Green carried out a major value engineering exercise to try to claw some of this back, but the contractor was still facing a higher tonnage of steel than it would have liked.

“We decided to use Grade 50 steel for a lot of the major repetitive components,” says Mr King, “the advantage being that we can use the same member sizes but it is a lot lighter, so we reduce our tonnage but issues about the architecture and headrooms don’t get impacted on.

“It is only worth doing for major elements where there is considerable weight: the columns and the main and secondary beams to the floor slabs up to level two,” he adds.

Grade 50 steel is stronger than traditional Grade 43 and, in some circumstances, could result in smaller member sizes had the team chosen to go down that route. However, as Ian Burchnall, Contracts Manager at DA Green, points out, changing to Grade 50 does not give any benefit in deflection, so beam sizes were likely to remain the same.  He adds: “By changing to Grade 50, they were not affecting the programme with a full redesign, but they were still getting benefits.”

Using Grade 50 for these key structural components allowed Shepherd to cut the total tonnage of steel down by 50t, giving a new total of almost exactly 1,000t.

The ground, first and second floors were erected from the ground, but for the two residential floors erectors have been using cherry pickers working from level two, together with a 50m reach luffing jib tower crane. The decision to work from level two has had repercussions on sequencing, particularly the construction of a service trough that runs below the floor slab at this level.

“None of the services from the flats can go through the retail space,” explains Mr King, “So we have everything – including soil and vent and rainwater – going through this trough, which is a waterproof, completely self-contained void in the ceiling space above the shops.”

The trough is being built in the same way as the rest of the structure with the steelwork hanging from the beams at level two of the main frame. Access to the trough will be via 200 manholes located in the corridors between the student flats.

“Initially we were going to form all those holes when we cast the floor slab,” explains Mr King, “but we soon realised that wouldn’t be the most effective way to go, so now we’ve laid the slab and we’ll cut the holes out later.”

This decision enabled DA Green to make full use of that floor slab for erection of the upper floors. However, the floor and walls of the trough cannot be concreted until the steelwork contractor has moved off, because the level two beams have not been designed to carry both the load of the concrete in the trough and the 3t cherry pickers.

When finished, the service trough will range between 750mm and 1200mm in depth, and will be 1500mm wide.

Erection of the final section of steel frame – the upper level of the curved side of the building – is set to finish soon. “For such a complex frame, the steelwork build has fitted very well,” says Mr Burchnall, reflecting on the success of a decision to split the detailing by Green’s in-house CAD team into four separate models, bringing them together at the last minute prior to fabrication.

Shepherd will now continue with the cladding (a mix of brick, steel, glass, stainless steel and prefabricated concrete) and interior construction. The contract includes shell and core for the retail units – which have phased handover dates – and full fit-out of the student flats.

The entire scheme is due for completion at the end of 2007. 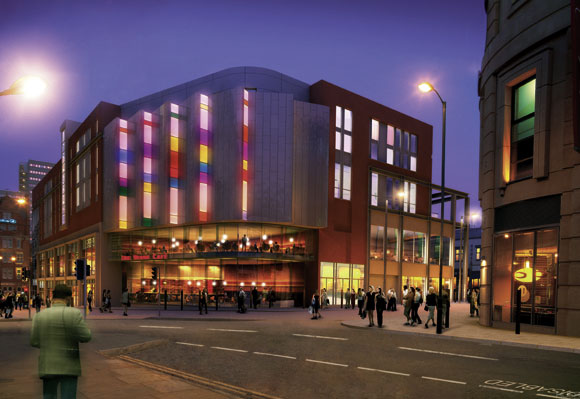 Artist impression of how the structure will look once complete