Logistics in the frame 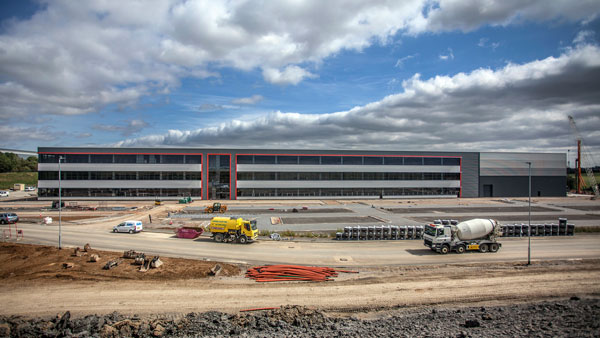 An East Midlands logistics park is currently completing its third phase, proving that steelwork has the right attributes to make it the ideal framing solution for distribution centres.

Northamptonshire has in recent times become the hub of the UK’s distribution centre infrastructure, as its geographic location in the heart of England is a key attraction, as is being close to the UK’s main motorways and the area’s good links to the port of Felixstowe via the A14.

This has helped the county to attract leading retailers and logistics firms, as well as branded food and consumer goods manufacturers, to set up distribution centres on its many purpose-built parks.

One of these is Warth Park, a 160-acre logistics and business park, adjacent to the A45 near Raunds, where a third phase is now under construction.

The latest work includes two new steel-framed distribution centres for Howdens Joinery (known as Units 2 and 3), which will add to the company’s existing on-site warehouse (Unit 1), which was completed as part of Warth Park’s phase two (see box).

Steel is the most commonly used framing solution for the construction of distribution centres and the material has a sector market share of approximately 90%. 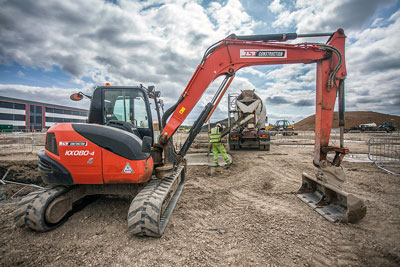 Groundworks underway for the construction of Unit 3

The material enables large clear spans – crucial for today’s modern distribution centres – to be created easily and economically. Designers also like the fact that a steel frame can be easily modified, strengthened and extended if a user’s future requirements change.

“There are always options when it comes to designing and building a warehouse, but the main reasons we’ve gone for a steel-framed solution are cost and speed of construction,” says Winvic Construction Project Manager Nick Lakin.

“The steelwork for Unit 2 was erected in just nine weeks, which allowed us to get all of the trades, such as cladders and roofers, quickly on site to follow on behind the progressing steel programme.”

Unit 2 is the larger of the two distribution centres, with a total area of 61,900m², and its steel erection programme was completed slightly ahead of its neighbour, although both have an overall completion date of November 2019.

It will feature a total of 56 cross docks and 19 level access doors, while internally, it is sub-divided into three separate zones by two partition fire walls.

Within the footprint of the five-span steel frame, the unit accommodates a three-level office block positioned along one of its gable ends. Additional office space is also provided by an attached 370m² single-storey pod located alongside the northern elevation.

Providing 3,700m² of space, the three-level offices are based around a 7.5m × 7.5m column grid pattern. It measures 60m-long and 22m-deep and its beams support metal decking to form the two upper floors.

Externally, the majority of this gable façade (four spans) has glazed cladding, as opposed to horizontal composite panels, which clad the other elevations. The glazing extends beyond the current length of the office block and adds some flexibility to the overall scheme.

“The extra glazing has been installed in case the client wishes to extend the office block in the future,” says Mr Lakin.

Project steelwork contractor Caunton Engineering has been subcontracted on a design and build basis for both buildings. The company’s Senior Structural Engineer Jay Hutton adds: “The portal-framed structure, particularly the overall stability, has been designed with the extended 160m-long office already taken into account.”

The steel design for Units 2 and 3 incorporates a hit and miss configuration for the internal columns, whereby one row of columns is omitted every other bay. This design creates more space for the end-user, but in Unit 2, even more column-free floor area was required by the client at one end of the structure.

This request required the frame to have a double-miss configuration for the last two bays along the opposite gable end to the offices.

“This means there are no internal columns for the final 20m of the structure and so the adjacent columns had to be designed so they could absorb additional vertical and horizontal forces,” says Mr Hutton.

As well as the two distribution centres, Winvic’s £45M phase 3 works also includes the construction of new associated infrastructure, such as a development road and a 15m-span bridge for an existing road.

Winvic was first contracted by Roxhill Developments in 2013 to construct new highways infrastructure and undertake a major cut and fill earthworks scheme to re-profile the site, which sloped up to 10m, to create plateaus for the distribution centres.

Phase 1 was completed the same year and included the delivery of a 3,900m² steel-framed warehouse for DPD, with steelwork being fabricated and erected by Caunton Engineering.

Three further steel-framed distribution centres were completed during phase 2, which finished in 2016. These consisted of a 12,000m² warehouse for Airwair International (steel by Caunton), a 38,200m² warehouse for DSV (steel by Severfield), and Howdens Joinery initial Warth Park facility (Severfield), which offers 60,880m² of floor space and a three-level office block.