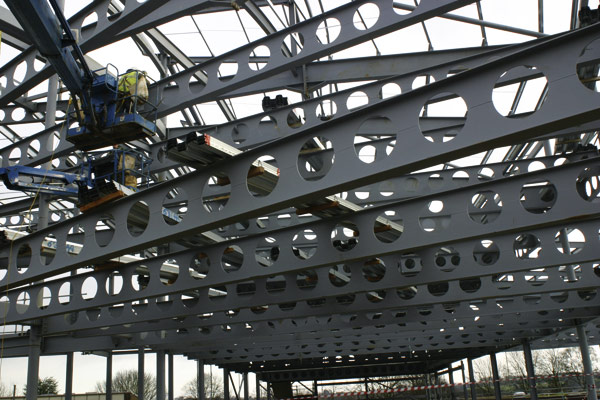 Conder Structures is half way through a £1M contract for the main steelwork of a new £20M college campus in Northamptonshire.

Conder was appointed by main contractor Leadbitter to supply and erect 710 t of structural steel for the five separate buildings that will form the new Kettering Campus of Tresham Institute of Higher Education.

The campus will consist of four buildings, each two or three storeys high, radiating from a central atrium. They will provide a total of 11,500 m² of teaching facilities and workshops. Floors throughout the four wings are being formed using Westok cellular beams to reduce ceiling depths.

Still to be delivered to site are five large “banana” shaped trusses that will span the atrium. Each truss measures 14.75m long and 1.25m deep, and will be hung on individual stainless steel cables. Conder’s design team began working with Leadbitter in June 2005, giving a longer lead-in time for pre-planning, design and scheduling than is usually available.

The Institute expects to be operating from its new buildings in early 2007.