A Homecoming for the Seagulls 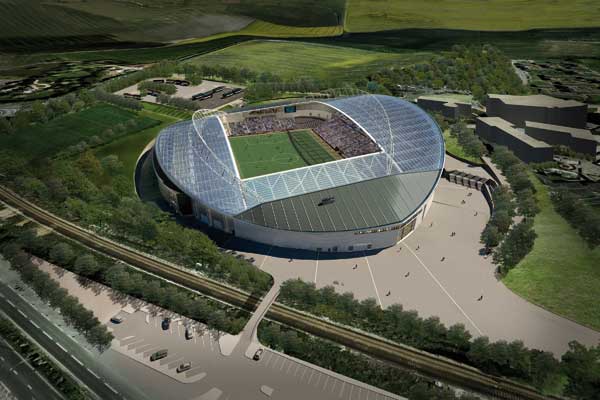 When Brighton & Hove Albion (the Seagulls) kick off the 2011/12 football season in their new 22,500 seater stadium it will bring to an end one of the longest running sagas in English football.
Since vacating the Goldstone Ground in 1997 the club has battled hard to have a new home of its own, with planning permission for its preferred site in Falmer going through two public enquires before being finally approved in 2008.

It has not been easy supporting Brighton, as following on from the acrimonious sale of the Goldstone Ground, the club suffered the ignominy of very nearly being relegated from the Football League to the Conference and then having to ground-share for two seasons with Gillingham, which involved a round trip of some 150 miles for players and fans alike.

The club finally returned to Brighton and settled at the Withdean athletics stadium, not a ground entirely suited to league football, but nonetheless the club’s home until the new stadium opens.

Martin Perry, Chief Executive at Brighton & Hove Albion describes the construction of the new stadium as a dream finally being turned into reality. “We’ve fought long and hard for this project and now we can see the stadium rising up on the site.

“There have been a few false starts along the way but now we can definitely plan ahead for life in our new stadium.”

Before the Seagulls do kick-off in their new home a lot of construction work has to be completed. Situated alongside the A27 – nine miles from Brighton city centre – and conveniently next to an existing railway station, the site not only had a serious slope but also a large chalk hill running across it.

One of the initial tasks main contractor Buckingham had to perform when it started on site last April was to begin a large earthmoving operation, to level some of the site and enable access roads to be constructed. 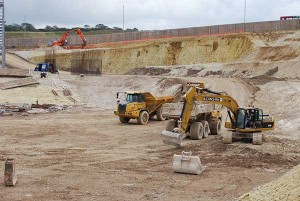 Earth moving is on-going and involves the removal of some 140,000m³ of chalk. “We have a large cut and fill operation whereby all overburden is removed to an adjacent council owned site,” says Duncan Halliday, Buckingham Project Manager. “This obviously keeps trucks off of the local roads.”

There is also some demolition work to undertake, as six recently vacated buildings, belonging to the University of Sussex and located on top of the chalk ridge which will be excavated, are to be removed.
As the site gets levelled, the structural works have been able to commence with the construction of the East and North Stands. The East Stand will be the stadium’s second largest with two internal floors and one tier of terraced seating. The North Stand – which will house away supporters – is positioned behind one of the goalmouths and incorporates a single tier of seating.

Steelwork also provides the signature element of the project, the roof. It is an undulating and sloping structure that is said to reflect the local land fall of the South Downs. Two large trusses will span either side of the stadium, above the West and East Stands, supporting this roof. The smaller North and South Stands will have more conventional cantilever roofs, but all four sides will be interconnected and this will mean temporary works will have to remain in place until the entire roof structure is completed in July 2010.

“The trusses support the roofs over the two main stands,” explains Watson Steel Structures Contracts Manager Peter Riley. “But tying the whole roof structure together is a ring of steel which passes around the back of the entire stadium. Until the whole roof steelwork is up, we have to install and then keep in place temporary support towers.”

The truss over the East Stand will be erected during the weeks leading up to Christmas. It measures 170m-long and will be delivered to site ‘piece small’ and then assembled into three liftable sections on the pitch.

Assembled on temporary trestles, the three truss sections will be lifted into place individually by crawler crane. Holding the truss in position at either end are two enormous heavily reinforced ‘thrust walls’ which have been partially buried into the ground. Cast-in plates connected to steel bearings, weighing seven tonnes each and designed to resist a thrust of 20,000kN (2,000t) – connect to either end of the steel truss.

The sequence for the truss erection will commence with the 60m long x 19m high x 12m wide southern section. Once in position this 120t section will be supported by one of two temporary trestles. The 55m-long x 13m high x 12m wide middle section is then lifted into place and bolted to the first section and again supported on a temporary trestle. The final piece of the truss ‘jigsaw’ will see the northern section, which is a similar size to the southern section, lifted and bolted into place. 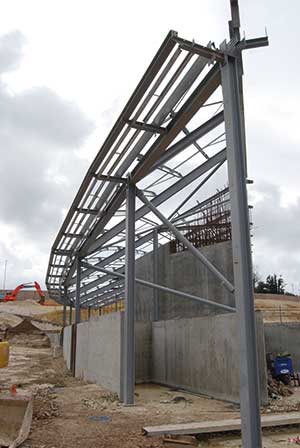 The North Stand, which will accommodate away supporters, takes shape.

As well as the truss temporary trestles, temporary restraints are also required at both bearing locations to stop the truss literally lifting off before the entire structure is in place.

Once the truss is fully erected Watson will then install the roof steelwork which connects to the back of the stand, as well as cantilevering rafters which form the front of the roof structure. Once the underslung lighting gantries are in place the entire East Stand roof steelwork will total a 675t.

Earthmoving and chalk removal continues on site and once complete next year a similar procedure will be conducted to install the roof over the largest stand – the three tiered West Stand.

“The West arch roof truss will be similar in many respects,” says Mr Riley. “But different in that it supports a larger area and will therefore be heavier.”

More than 200t of cold formed bespoke purlins and rails will be supplied for the roof structure by Albion Sections.

The entire steelwork package is scheduled for completion in July 2010, with overall construction completion due in May 2011. This is three months before the 2011/12 football season kicks off, with the only remaining question being – which division will Brighton & Hove Albion be in then? 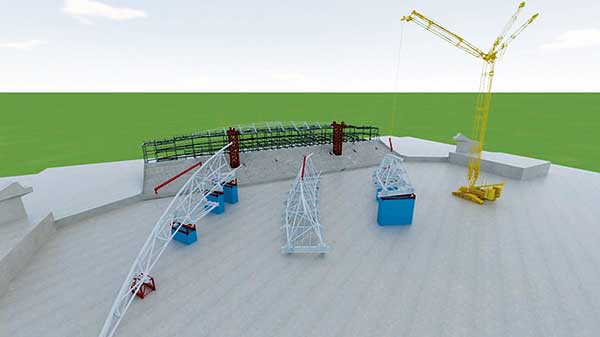 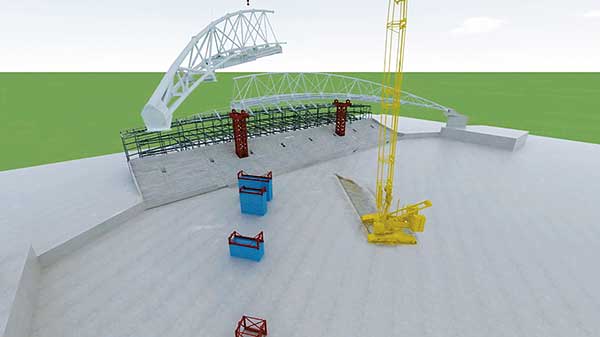 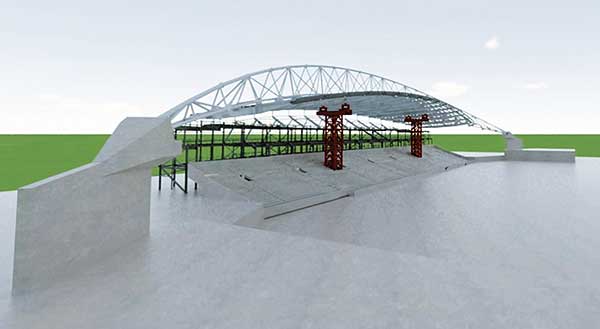 The long and winding road

The Goldstone Ground was the home of Brighton & Hove Albion from 1902 until April 1997, when the club played its last game at the stadium against Doncaster Rovers. The sale of the ground, implemented by majority shareholder Bill Archer and his Chief Executive David Bellotti, proved controversial as the club received little money from the transaction.

Paying for an ensuing public enquiry, rent for the current Withdean Stadium, fees paid to Gillingham for ground-sharing, and a general running deficit meant by 2004 the club was £9.5M in debt. This huge debt was paid off partly through a large scale fundraising appeal involving the club’s fans.

In October 2005 the news which everyone had been waiting for arrived when the Office of the Deputy Prime Minister announced that the application for Falmer had been successful. Hopes were quickly dashed when Lewes District Council contested this decision forcing a judicial review. This was based on a minor oversight which neglected to state that some car parking for the stadium is in Lewes as opposed to Brighton. This obviously caused further delay, but once the judicial review ruled in favour of the stadium, Lewes said it would not launch further appeals. This was indeed good news for the football club and construction work was able to begin.